This was our second day at sea, to cover the distance of 1000 miles to get from Montevideo to Rio de Janeiro. The outside temperature is slowly climbing but it will not get very warm until we are passed Rio and are turning north along the coast again. At the eastern end of Brazil is Cabo Frio, or the cold Cape and here the temperature really goes up. Rio can be very warm but not necessarily so. Bahia de Salvador mostly is, due to being closer to the Equator and due to the fact that the colder water of the Brazil current does not reach here. Cabo Frio is not named Frio for nothing.

We are now also starting to come under the influence of the Amazon Forest and that means that when the wind, what ever light it might be, turns slightly to the West or North, then we can get showers. Not just a mild drizzle but torrential down pours that can last 20 to 25 minutes after which the sun can peak through the clouds for awhile until the next shower arrives. I hope that we will miss most of it but we would be extremely lucky if we would have dry weather all the time.

We still have this big southerly swell behind us with waves to 10 to 14 feet and we all should consider ourselves lucky that we sailing with the waves. It would have been a very bumpy ride otherwise. We still can feel the Brazil current pushing against us with about a knot, as the ships speed is about a knot lower than what it should have been with the current engine setting.

We will be arriving at sunrise in Rio as this is one port where you want to be early. There will be four cruise ships in tomorrow. The Delphin Voyager (came in yesterday), us, and then the MSC Poesia and the Grand Mistral which both have Rio as a turn around port. The latter is a tricky affair as the luggage has to be rolled over an open pier to the terminal and you only need one downpour………..

We are scheduled to dock at berth 1, which is the best dock in the port and also the location of the original passenger terminal. With cruises getting more and more popular, they also have extended the cruise terminal but the old part is still there and in use. Part of it has been turned into Shops and of course H. Stern of Brazil is prominently present.

We do not have that many sea days, real sea days on this cruise and that means that everybody who has or wants to do something apart from the regular daily program items has to cram it in during the sea days. So there were the travel agent parties, the luncheons, formal dinner (last night) and a number of impromptu things organized by the guest’s ad-hoc where the ship was not even involved in. That is part and parcel of course of a Grand Voyage. The longer the cruise lasts, the more people strike up a friendship (if not already present from past cruises) and the more get togethers will ensue.

The ships complement spent the day preparing for Brazil. Brazil has a number of requirements that no other South American country has (it is in many ways similar to the USA) in regards to Health, Immigration and Customs, so we need some time to get it all in order. Most of the clearance of the ship has been done by email already, ahead of time but the verification of it all will happen during our stay.

The weather for tomorrow looks good. If there is no wind at all, it will be overcast, but if the gentle breeze is coming through from the East it might be sunny or at least partly cloudy. However if it stays overcast, then it will keep the temperature below 85oF and that is good as well. 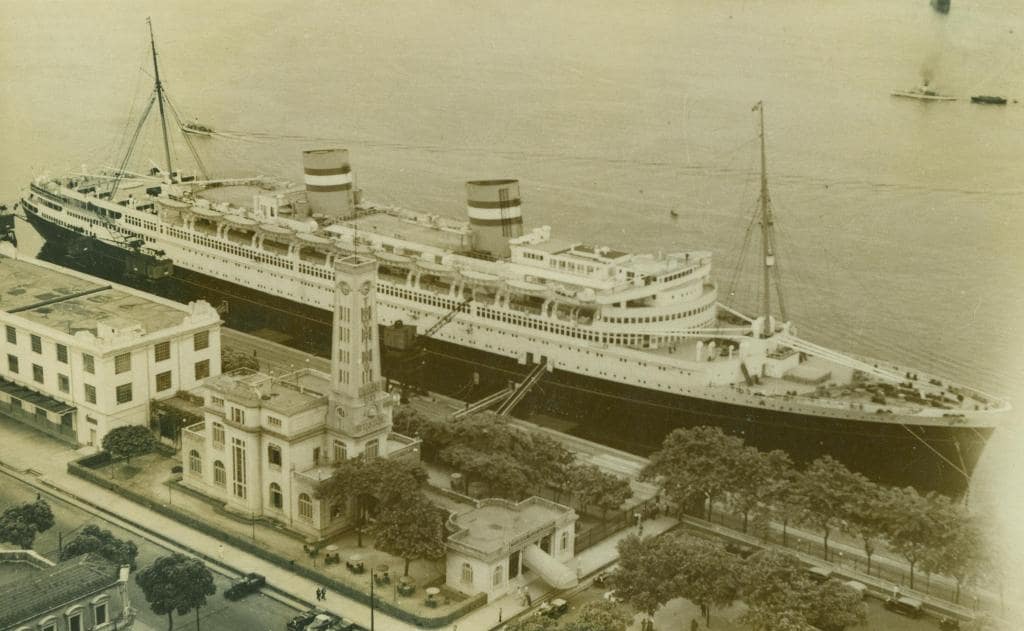 A Golden Oldie this time. The Nieuw Amsterdam (II) on a cruise to Rio during her first year of service 1938/1939. (See the slits in the forward funnel which were closed in after her first North Atlantic season) I will post a photo tomorrow of how it looks like now