The weather system did come our way and it did start to blow during the early morning hours. By the time we reached the Montevideo pilot station the wind speed had freshened to 40 knots and gusting higher. By that time I was on my 3rd pilot for the night. We had the harbour pilot for the first three hours from Buenos Aires, then the river pilot for the next six hours and by 06.45 it was time to pick up the harbour pilot for Montevideo. The other two pilots remained onboard which saved me time and it was also handy as they could call the locals in Uruguay in their own language. The harbour pilot from Montevideo did not look like a harbour pilot at all. More like a retired college professor and such was also his behavior. He studied the radar as if it was a dissecting instrument used in a lab somewhere and then drank his coffee as if he was sampling each ingredient separately. However he knew how to conn a ship and that is what it is all about in the end.

Thus we had a educated conversation about wind, docks and tugboats and it was agreed upon that we needed everything available as the wind would be on the beam when entering through the inner breakwater (100 meters wide on a ships beam of 30 meters) and as the Splendour of the Seas was already docked, it would be a tight hole that was going to be left for us. Luckily we were partly sheltered by the Splendour and some local buildings and thus we were able to come alongside in one smooth maneuver.

Time keeping is not an item that is high on the list of pilots; when done they go home and leave the captain to sort out the final results, thus I could not get the ship to come in on time. Due to the docking of the other cruise ships ahead of me we docked about 30 minutes late. The tugboats were of great help here as I could put out the gangway while we were still making fast; they simply pushed the ship alongside and kept it there until we had given out sufficient breast lines. The gangway out at 08.30 and the ship was cleared at 08.35. Montevideo is not really South America when it comes to shuffling paperwork. Fast, efficient and focused on delivering a good product that will make us come back. With that attitude, a mixture of German efficiency and British politeness (both countries sent a considerable number of immigrants here), it was a pleasure to be in this port. 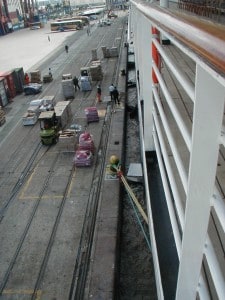 We had to load 10 40-foot containers during the day, with mostly supplies coming from Florida USA, where we have a consolidation warehouse. With about 500 pallets coming out of the containers and each pallet to be loaded separatedly into the hull, loading does take awhile. The red bags in the fore ground are onions that are sourced locally.

We had heavy provisioning here and the landing of garbage and recyclables and that took all day until departure. Then the departure routine for the Costa Magica, the Splendour of the Seas and us went the other way around. Hence I also departed 30 minutes later then expected. This worked out well, as we still had one container with new deck (steamer) chairs to empty out. These chairs will start to appear on the Promenade deck in the coming days, as soon as the carpenters can assemble them. They are especially made for HAL in Sri Lanka and as we have to order them by the container load it sometimes takes a while before we get new ones onboard.
While docked, I could see the open water from the bridge and the white caps kept appearing on the rolling waves of muddy brown water. A lot of wind means also a lot of swell out in open sea and thus I announced on departure that it would be bumpy in the evening until we would be back in deep water again and turning to the North. It was indeed bumpy. The ocean swell on shallow waters turns into a sort of groundswell and that makes the ship livelier than it normally would be in relation to the sort of weather present. Plus the shallow water creates squat and during the evening the ship shook occasionally when we passed a now more shallow part, due to the highs wells than normally would have been the case. 30 feet under the keel instead of 40, does make a difference for the water flow around the ship.

Our departure was the one of the “blow away maneuver”. The wind pushed us off the dock and with the aid of an aft tugboat and the bow thrusters we moved sideways with about a knot of speed until we were lined up in front of the inner harbour breakwater. Then it was a matter of giving full ahead and keeping to the high side of the fairway to sail out safely.

Tomorrow we will be at sea for two days as it is 1042 miles from pilot station to pilot station while we head for Rio de Janeiro. The windy weather will turn into following winds and then later will abate.