The weather improved dramatically during the night and I woke up to a very sunny and dry day. Very good weather indeed and it remained good until departure. Buenos Aires is a change over port and we had about 100 guests leaving and joining today. In Rio de Janeiro another 50 will change and then we will continue to sail with a full house up and down the Amazon and towards Florida. Also this was a bunker port for us, where we loaded 1100 tons of fuel, enough to get us home if needed. However the Chief Engineer might top up somewhere if the price is right. I was a bit annoyed with the bunker barge as we had ordered the barge, and it was confirmed, for yesterday during the day. However the barge popped up last evening and the transfer had to take place during the night. That can always cause noise and that is something that I try to prevent, however I cannot force them and nor can I refuse them. I need the fuel and I need to sail on time. Luckily the barge decided to stay alongside when finished, due to labor/rest regulations and so we had at least not the noise of a departing barge in the middle of the night.

An overnight in port gives the option to catch up on a regular nights sleep and to clear away some paper work. Regardless of the sort of cruise that we are doing the projects that the office puts towards the ships need to be completed and as the Prinsendam has very few sea days, where we have spare time during the day, we have to fit it in during these port days. That can be challenging as the Prinsendam visits most ports only once a year, so we never have the routine available that can be established during regular visits. It is one of the things that I enjoy as part of the Prinsendam life but it takes a lot of proper planning to get everything done. 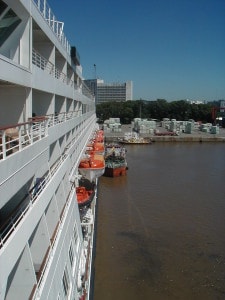 The bone of my discontent, a local bunker barge not keeping to the schedule.

So I cleared my email – to do- file made a few people “happy” with extra tasks and did an inspection round of the lower decks. After that it was time to see my wife off who was going home and then time for a short nap; as tonight is going to be a long night again. The ship was scheduled to depart at 20.00 hrs. and I always try to get out half an hour early. However I am starting to learn that that does not work in South America. Officials return to the ship about 45 minutes before the official sailing time and then keep shuffling papers and stamping things until the last minute or even past sailing time. In most ports the “clearance” (a paper that indicates that the ship is free to sail and duly cleared out in its last port) arrives well before sailing time but not so in most South American ports. 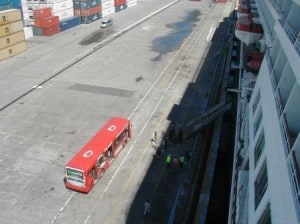 A regular sight when docking at Container terminals. For safety reasons nobody is allowed to walk on the docks and thus shuttle buses are used to and from the entrance terminal.That can be a bit of a hassle but here in Buenos Aires it worked well.

Thus we sailed at 20.20 hrs, with the last sunlight coming over the horizon and started working our way back to the East. Again we were sailing in convoy with the Costa Magica leading the way, the Splendor of the Sea in the middle and the Prinsendam last as we had the latest sailing time. With a sedate speed (dictated by the squat of a very shallow Rio de la Plata) of 14 knots we went down river. Once we were out of the port, the chief officer remained on the bridge until early tomorrow morning, so I could catch about 4 hours sleep and then I will do the stretch from 2 am until docking. As the canal is long and straight it is a very boring watch. Still we have to be very focused as the dredged channel is fairly narrow and one steering mistake of the quartermaster or a wrong course order from the pilot can make the ship go out of the channel and aground.

Tomorrow we are in Montevideo, Uruguay, and the weather should be good. There is only the chance that it might get windy. There is a disturbance off the entrance of the Rio de la Plata and if it comes this way, we will have fun and games on arrival.