It is roughly 150 miles up river to Buenos Aires and with having to maintain a slow speed because of the squat it was all night affair to get there. The wind had some sort of funnel effect on the river and blew at times with over 40 miles an hour but it helped with giving us a bit of extra speed and to counteract the strong Ebb current against the ship. As mentioned yesterday we had picked up the pilot at 21.30 and then faced a 30 minute delay due to traffic coming down river. With ships going ahead of us, it was not possible to make up that time. The opposite was the case. When coming closer to the port there was a containership the Monte Rosa of the Hamburg Sud., which had to go to the same port as us and that cost me another 30 minutes. In the end I docked right on the scheduled arrival time of 0800 hrs. Not too late but my little plan of being earlier to help with immigration did not work out. Luckily the authorities worked with us this time and 5 minutes later they pre cleared the ship so that the flight tour could leave on time.

I use the phrase “go to the same port as us” and that has to do with the fact that Buenos Aires has a port lay out that is made up of three parts. There is the old port, now only in use for small craft as it is silted up, the cargo port, which was the main port before the 2nd world war and the new port which was constructed in 1940. The latter one now takes all the big ships, which are mainly container ships and cruise ships. Hence that we had to follow the Monte Rosa, as she went the same way. Docking in a container port is not ideal due to the distance from the entrance gate but on the other hand if gives guests who are not familiar with the way cargo is transported nowadays a fascinating insight in how it all works.

Although the weather forecast indicated dry weather, this was not exactly the case. By 4 pm. we had a downpour with strong winds that lasted for a good two hours and then for the rest of the evening it rained off and on. Tomorrow should be better again but the local news keeps talking of flood rains. 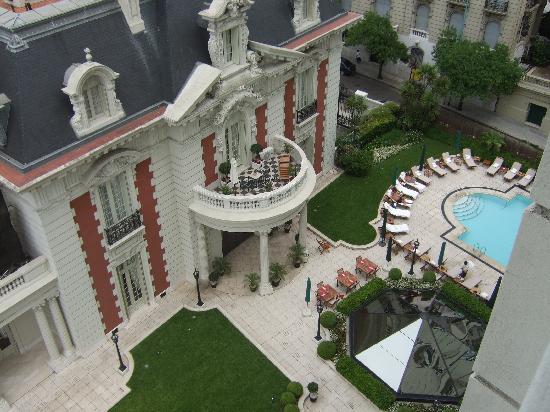 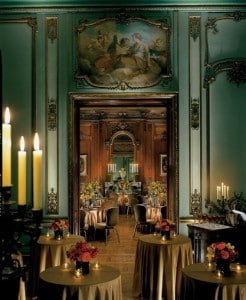 Corner of one of the two diningroom area’s.

That the rain fell in showers made it possible that most of the evening tours got out, during the dry periods, without anybody getting wet. That was even more important as this evening we had one of the most important events of the cruise. Once during a Grand Voyage the guests of the large suites on board are invited for a special night ashore. This time the company had arranged an upscale dinner with entertainment at La Mansion, which forms part of the Four Seasons hotel in Buenos Aires. It is considered one of the most exclusive places in South America and used to be the residence of Saturnino de Alzaga, who built the mansion as a wedding gift for his wife in 1916. As he had a ranch with about 170,000 acres of arable land in the country, I suppose he could afford it. 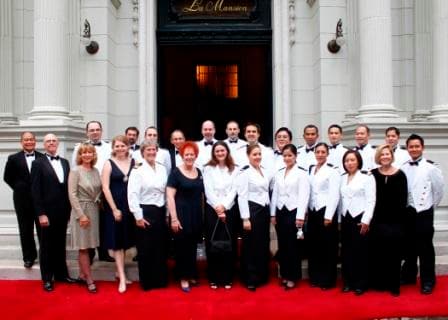 It is standard that the captain is the host for this evening, so together with a number of officers we were duly taken by coach to the place to welcome the guests. With the red carpet out, we welcomed the guests to a cocktail party, followed by dinner and a Latin American Choir Recital. It was a most pleasant affair. 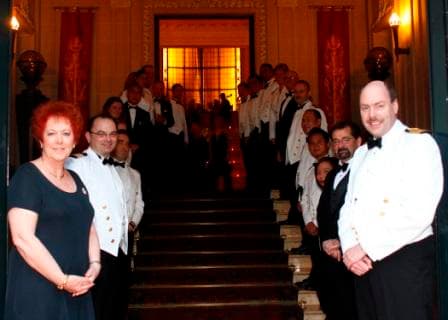 All lined up for the guests. 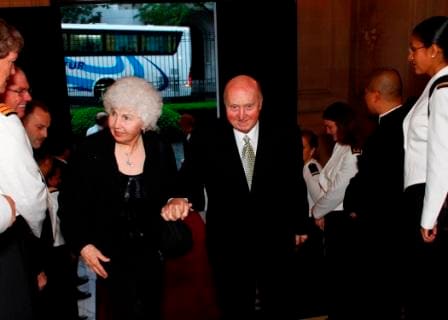 The First Guests on the red carpet.

The ship is staying for an overnight in the port and tomorrow most guests will be ashore for more sightseeing or shopping. I am keeping my fingers crossed for dry weather.