Our second day at sea was sunny but very windy. However as it was a following wind it did not affect the situation for the ship very much. Most guests were busy in the ship anyway with their daily activities, or for about 150 of them, getting ready to go home. Both in Buenos Aires tomorrow and in Rio de Janeiro guests will be disembarking. About the same number of guests will board and we will then continue our voyage with a full house again. For these leaving guests there was a farewell meeting in the Queen’s lounge followed by a farewell cocktail party in the Crows nest. Some of these guests had joined us in Valparaiso and were only onboard for the Antarctic segment. Others had joined in Fort Lauderdale and were leaving because they had already visited the Amazon. Of those leaving a few took the opportunity to stay behind in Buenos Aires for a few days to see the sights. Especially when coming from Australia or Europe it makes sense to do that as you only have to make the long flight once.

Our Cruise director had set up a Question Forum in the Queen’s lounge in the afternoon, with the Expedition Leader, the Ice pilot and yours truly on the stage as the three wise “ice-men”. Everybody had the chance to ask questions and the subject in general was ice. What is above it, what is under it, and what happens if you hit it (The latter I do not know as I thus far I managed to avoid doing that) the lounge was full and the hour long get together went very fast. I think it was a good way of closing out the Antarctic episode of our cruise. 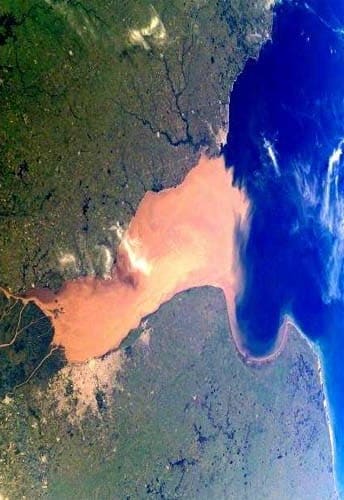 The silt in the water of the Rio de Plata. I put the photo vertical so left is West and Right is East, the same way as we travel (West to Northwest) up river. Montevideo is the light patch in the top right corner near the blue sea and Buenos Aires is the light patch in the lower left just before the river becomes very narrow. Photo from unkown source on the internet.

A few hours later I was standing on the bridge for the approach to the Rio de la Plata. As it has Buenos Aires and Montevideo as large ports on its borders there is a lot of traffic coming and going. That requires my presence on the bridge and although the OOW will continue to conn the ship, I am there to offer mental support. Apart from the traffic the challenge with this river is its shallowness. Enormous amounts of silt are carried down river and as the river is getting wider and wider when it nears the Atlantic Ocean, a lot of this silt gets deposited before it reaches open waters. That means that when we enter there is very little water under the keel. 3hours before the pilot station (located just south of the Montevideo approach) it is already down to about 6 meters/18 feet and it goes down to sometimes less then 8 feet.

Because of these shallow depths we cannot approach with full speed. The faster you go, the deeper the ship sinks in. This is called Squat and can add as much as 10 feet to the draft of a ship. The slower you go, the less squat there is and as this squat can be calculated, I look it up in the Prinsendam squat table and so figure out the highest speed/draft/water depth relation. With the upcoming tide and extra water pushed in by following winds, I could keep a speed going of about 14 knots all the way to the pilot station. A good thing as well as due to the windy weather, in the early evening the wind freshened up to about 40 knots, the pilot boat had moved further up river to have some more shelter from the swell. Thus we had further to travel while trying to keep the same pilot boarding time.

Ahead of us was the Costa Magica which made a 360o turn after its pilot had boarded. I was puzzled. However when my pilot came onboard, we made a similar maneuver. It turned out that we had to wait for outbound traffic. I was not pleased as that cost me 30 minutes. I had planned on arriving early, by 7 am., to help getting the Iguazu waterfalls tours timely on its way but now it will be 07.30 tomorrow morning at the earliest. By 10.15 we were on our way and I handed over to the pilot and the chief officer. The latter was doing the standby until 2 am tomorrow morning after which I will do the rest, including arrival.

The weather looks reasonably good, overcast but no rain forecasted and temperatures in the low to mid 70’s.