Today we spend most of the day in “hazy Weather”. Sometimes good enough to see the mountains of Vancouver Island and sometimes worse enough to only see the mast on the bow of the ship. Still I consider this a “ can be worse situation” as the ship offers enough diversion to keep everybody going and on this stretch of open water there is a limit to what you can see anyway. So the guests had to be a bit more inward looking, that is looking inward into the ship.

First of all the day started later than normal, as we had an hour forward during the night, so the ship could get in sync with Canadian time again. By the time breakfast was concluded there was quite a bit to do on in the ship.

Fitness, Shop sales (end of season T shirts going like hot cakes), Computer training, Americas Test Kitchen (with flavors of the Mediterranean), Art Auction, Black Jack tournament, Ask the Captain (now there are no longer bridge tours, the Captain gives a presentation and does a Q & A in the show lounge), Daily Movie, Games including Trivia, Afternoon Classical Music, High Tea and ………….. Bingo. And by the time you had participated in all those things, it was time to change into formal and to go for Cocktail hour.

I held my Holland America lecture on Hubbard Glacier morning and was blessed with a full house. 400+ guests in the main show lounge. If everybody sticks to one seat we can get about 600 guests in the show lounge but our guests like to spread out and for some reason shopping bags need a seat as well and thus I was fully booked, with guests and shopping bags………………. Because I only have 80 minutes, I leap frog through 143 years of history and I have to leave a lot of our colorful history out of the presentation. That always results in a number of guests stepping forward who want to know why I did not mention their ship. As Holland America had over 200 ships in their history, it is simply impossible. So I have a little Q & A session afterwards to focus on my omissions. 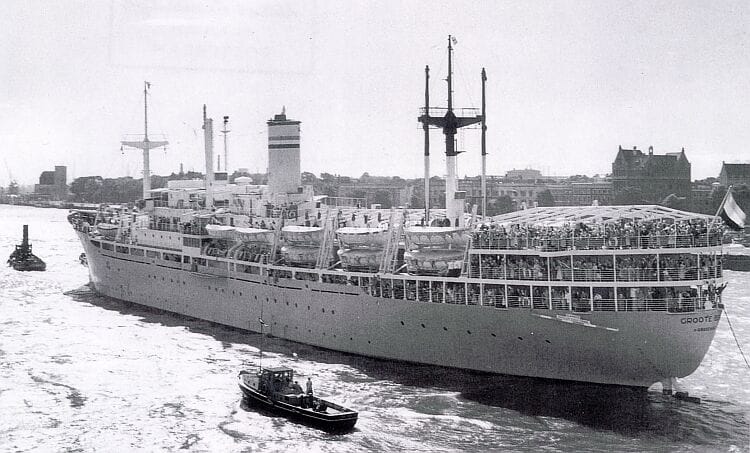 The ss Groote Beer departing from Rotterdam in 1952 for an emigrant voyage to Canada.

It is amazing that 50 years after we stopped carrying emigrants to the USA and Canada, there are still guests stepping forward who emigrated to the new world with Holland America. We must have done something good in those days as they are now willing to come back and cruise with us. One peculiar part of that emigration business which confuses most people were the emigrant ships of the Dutch Government. After WWII the Dutch government bought three victory ships with Troop accommodation and used them for taking military to the Dutch East Indies before they went independent in 1948. The government then wanted to use them for regular immigration and soon found out that running ships is totally different than running a government. So the three ships were given into the management of the three largest Dutch Shipping Company’s. The Groote Beer (Big Dipper) went to Holland America, the Waterman (Aquarius) went to Royal Rotterdam Lloyd and the Zuiderkruis (Southern Cross) went to the Netherlands Line. Holland America later on bought the Groote Beer and operated it for many years specializing in emigrant and student trips. 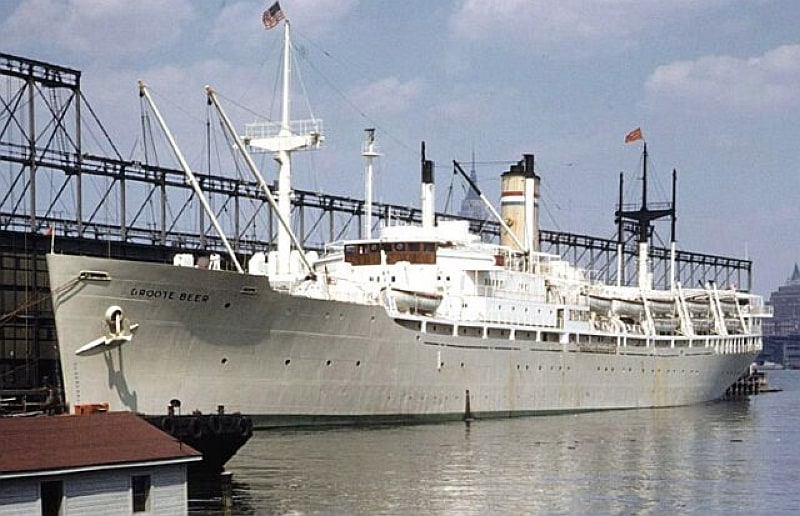 The ss Groote Beer had been built as the American Victory, then ss Costa Rica Victory. She was later on extensively rebuilt. Here she is seen in the 1960’s docked at Hoboken where the Holland America Line had its piers. For some reason the ship always kept the funnel colors of the Dutch Government Line (Trans Oceaan) she started out for.

What was confusing for the passengers was; that when any of those ships made a trip to New York or Canada, the name of Holland America was on the first page of the Passenger List. Then later on they would find out that they had not been on a Holland America Line ship but on something else. Reason was that Holland America ran the management and were the port agents for all these voyages to North America while Rotterdam Lloyd and the Netherland Line did so for the rest of the world.  So this Constellation Class of ships caused and still causes a lot of confusion among those who started their new lives by going across on any of them.

We will be sailing South of Vancouver Island for the remainder of the day and night and then enter the Strait of Juan de Fuca around 07.00 hrs. By noon time we should be at the Victoria pilot station and be docked by 13.00 hrs.

I expect that we will continue to have very low clouds until late tomorrow morning, unless the sun burns it all way. The weather forecast calls for a partly cloudy day 12oC / 54oF and that should just be nice for visiting the most English of all the Canadian ports.