To comply with United States immigration and economic regulations (Passenger Services Act and Jones Act) we have to call at at least at one foreign port during our cruise. For ships that sail from Vancouver this is not an issue at all but for Seattle ships you have to select one. The fact that Victoria is a very nice port, and conveniently located near Seattle, makes it an obvious choice.  Getting there, depends on sailing around Vancouver Island and if the weather is nice, then the ships take the outside (South side) route coming down from Alaska as it guarantees a timely or even early arrival. Going the Inside Passage (North side) way, can cause delays due to traffic and in having to adjust for the slack tide times of the Narrows. Plus, as I explained in an earlier blog most of the scenic transit would be in the dark.

Thus we sailed early this morning into Strait Juan de Fuca although we did not see anything of it. A white cloud had reduced the whole area to very small world and the navigators relied on the Radar and the electronic charts to stay on the straight and narrow. But as the weather forecast had indicated partly sunny weather, it was almost certain that all that whiteness would burn away later in the morning. And indeed by 11 am the curtain was raised and we could see the whole Pudget Sound to starboard and Victoria to port in front of us. 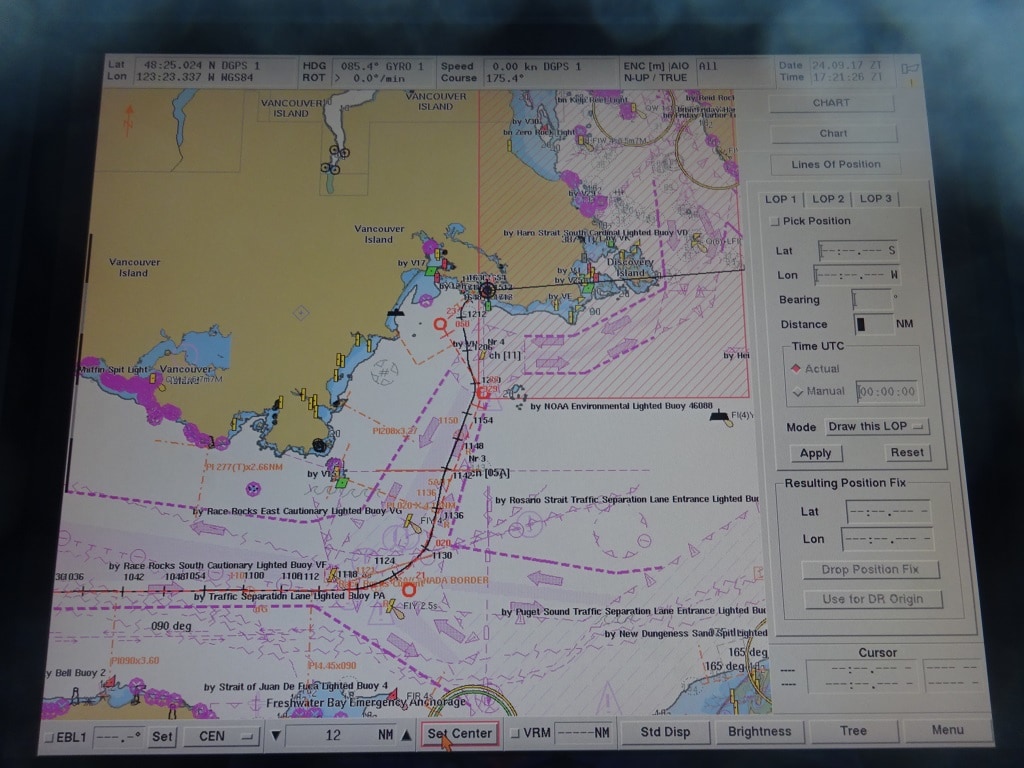 The magenta dotted lines and arrows are there to keep the traffic apart and does not allow you to cut the corner.  Only when the pilot is on board you can leave the regulated track to sail into Victoria. There is traffic control which keeps an eye on all the ships. You have to report and you get told off if you do not follow the rules.

Because traffic for the whole area, Victoria, Vancouver, Seattle, Tacoma, etc. comes together over here, either to get in or to get out, this is a very busy place for ships. As a result the shipping community has long ago created traffic lanes to keep everybody apart. There where the ships need to cross each other’s track lines, a sort of roundabout system have been implemented, to make sure that ships do not cross each other’s bow but sail behind each other while crossing the area. 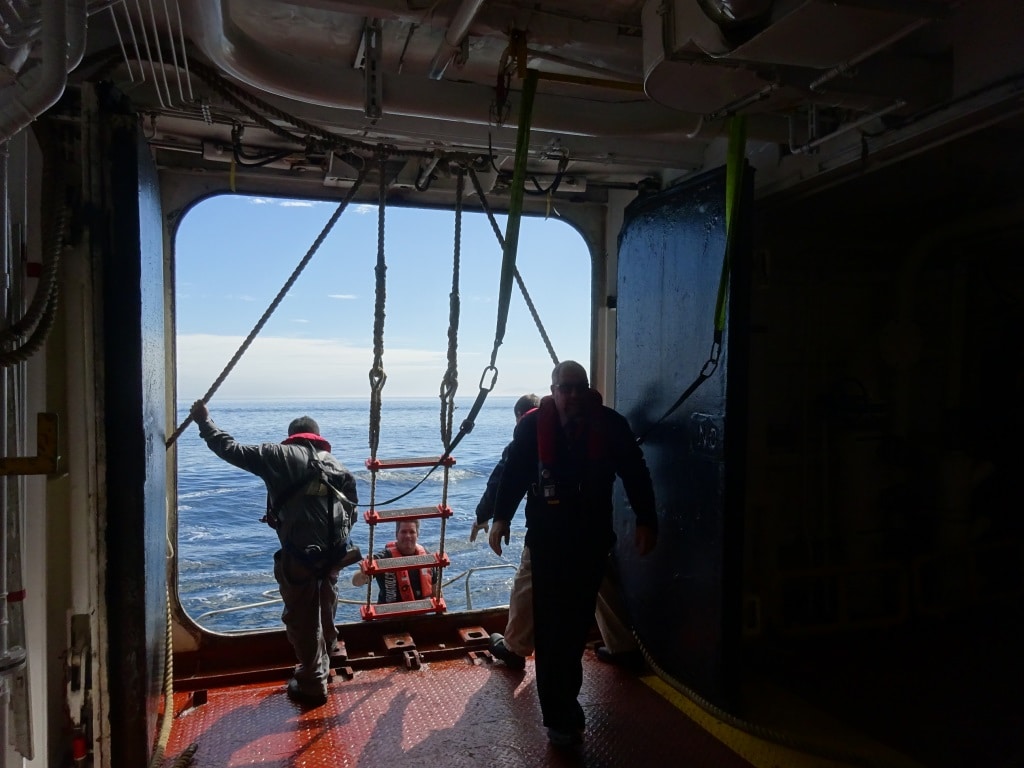 The pilot stepping on board. To ensure safety there is a deck hand on the pilot boat to help him up the pilot ladder and two sailors on our side to help step safely on board. Wearing life jackets is compulsory. Here the pilot has been safely transferred and walking towards the Security Officer to have his I.D checked.

Victoria throws another equation into this busy situation as it also has the pilot exchange point here. Either for boarding pilots who will guide the ships up to Vancouver, or for disembarking the pilots who come down from Vancouver and are destined for open sea. We are then a 3rd happening, by embarking the pilot for going into Victoria, which from the pilot station is barely three miles. So including docking it never takes much longer than 45 minutes from pilot station to being fully docked with the gangway out.

Victoria has a nice port but it can be very windy here so for captains this is always a mixed blessing. Yes we like to go here as it is a nice port and the guests like it very much but if the wind is under a wrong angle then it can be very complicated to get in and on occasion we have had to cancel a call because there was simply too much wind. That same wind is less of an issue for Seattle as it is further inside and then most of the wind has already lost its “teeth”. 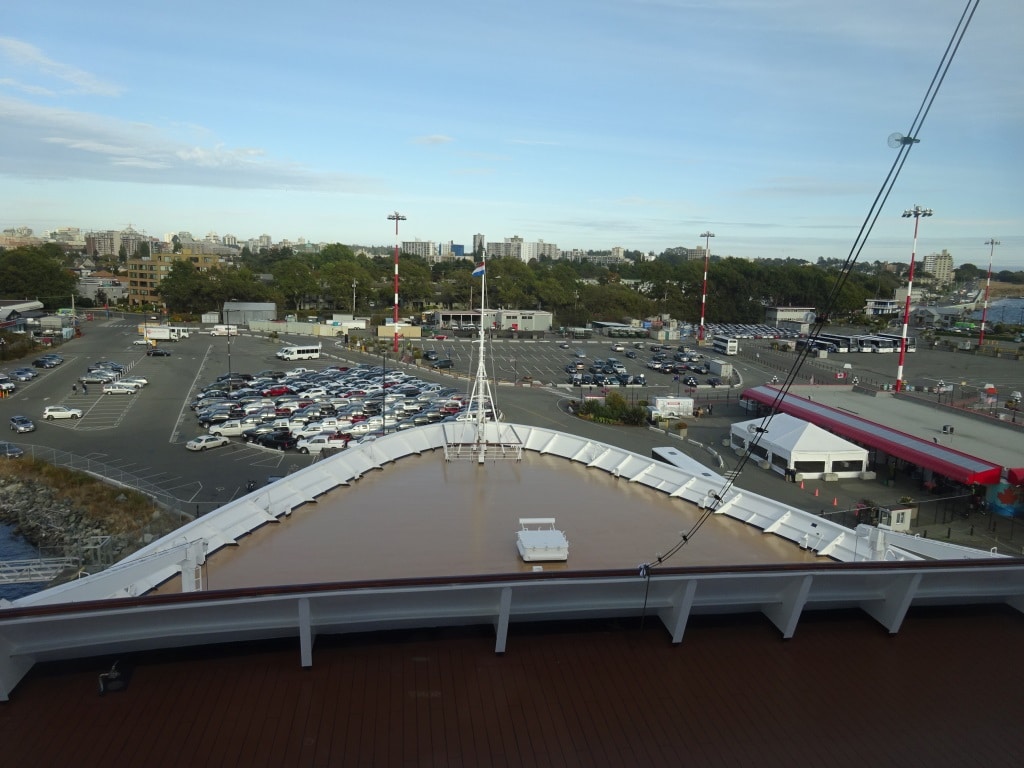 If you push the ship in as far as it can go, then it looks as if you have parked in the local car park.

Today we had just a gentle breeze going, just touching wind force 3, and we sailed into port without any issues. The pilot hopped on board at 11.45 hrs. and 30 minutes later the ship started to ease into the berth. Here in Victoria we prefer to go nose in as it is a more natural maneuver to swing just 90o from an easterly course to a Southerly in the open harbor area, then to go stern way into a narrow space and bring the propellers or Azipods close to the dock wall. The dock is just long enough to accommodate the length of the Amsterdam and thus inching the ship forward as much as possible is also much easier than doing it stern way.

The ship will stay in Victoria until 22.00 hrs. and then will have a 6 hr. crossing to Seattle where it will start docking around 04.30 hrs. It will be a short night for the Captain and the Navigators as it will not be until midnight before the Pudget Sound pilot is on board and then 3.5 hours later the docking approach to Seattle will start already.

Once the guests are off, all mayhem will break lose with the ceilings being opened up for pipe replacement and carpets being torn out for renewal. While this is starting the ms Amsterdam will cross the bay to go to Vigor shipyard near Tacoma where we will stay for two days.

Unusual for Seattle, but good for us, is that we are not expecting any rain, or wind, and have a mild day with temperatures of around 13oC. 56oF. Not a bad way to end a very nice cruise. 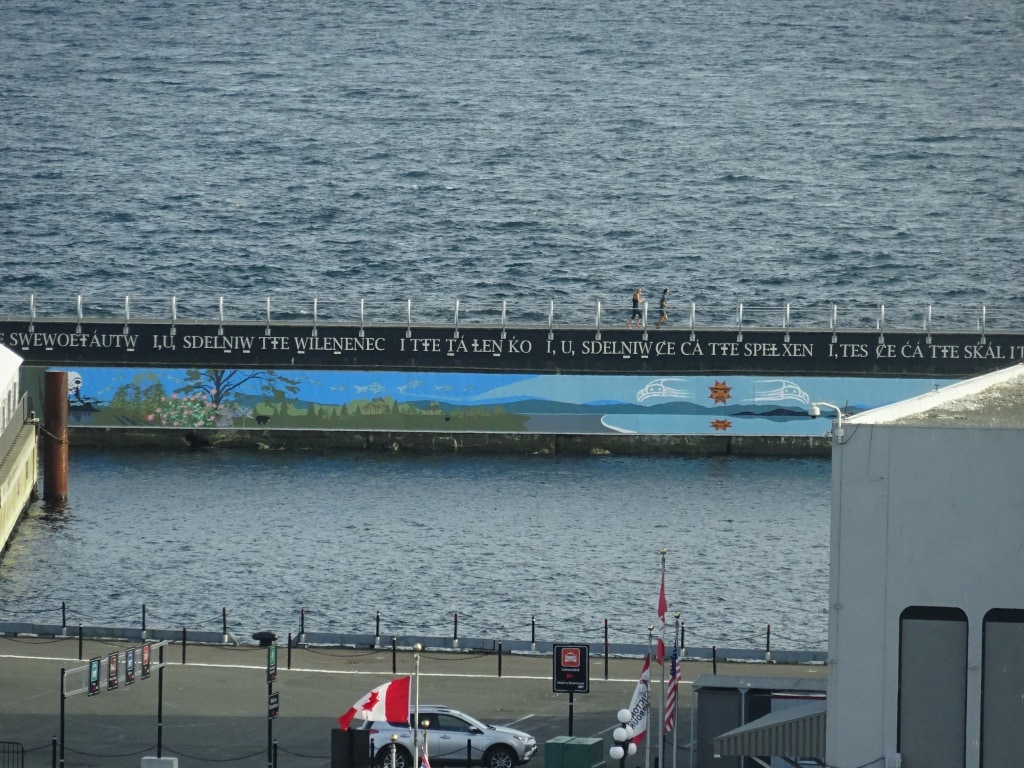 This mural is painted on the inner breakwater of the port. Anybody who can decipher the language ??