Sitka today turned out to be a very rainy day. Although the forecast said that it would dry up in the afternoon, it seems that somebody forgot to advise the Weather Gods as it just kept raining in an advanced sort of drizzly way.

The good ship Amsterdam docked at Sitka this time, as a dock was built a few years ago at the cargo area of the town. Basically the area where the tug and tows come in with all the containers with supplies from the lower 48.

Until 2013 every cruise ship, unless it was very small, had to anchor on the south side of Sitka where there are four designated anchorages and at times these were all occupied. The advantage, as long as you were on the inner anchorage or at the 7 Fathom anchorage, was that it was a short tender distance and you landed straight in down town.  The other two anchorages were further out and caused a long tender ride.  The inner anchorage and the 7 Fathom were not suitable for the larger cruise ships and thus they had to go further out. Their length made it impossible to swing around on the tide and then, either they had to keep their engines on and work against the current which tried to swing the ship around or go to one of the two anchorages further out. 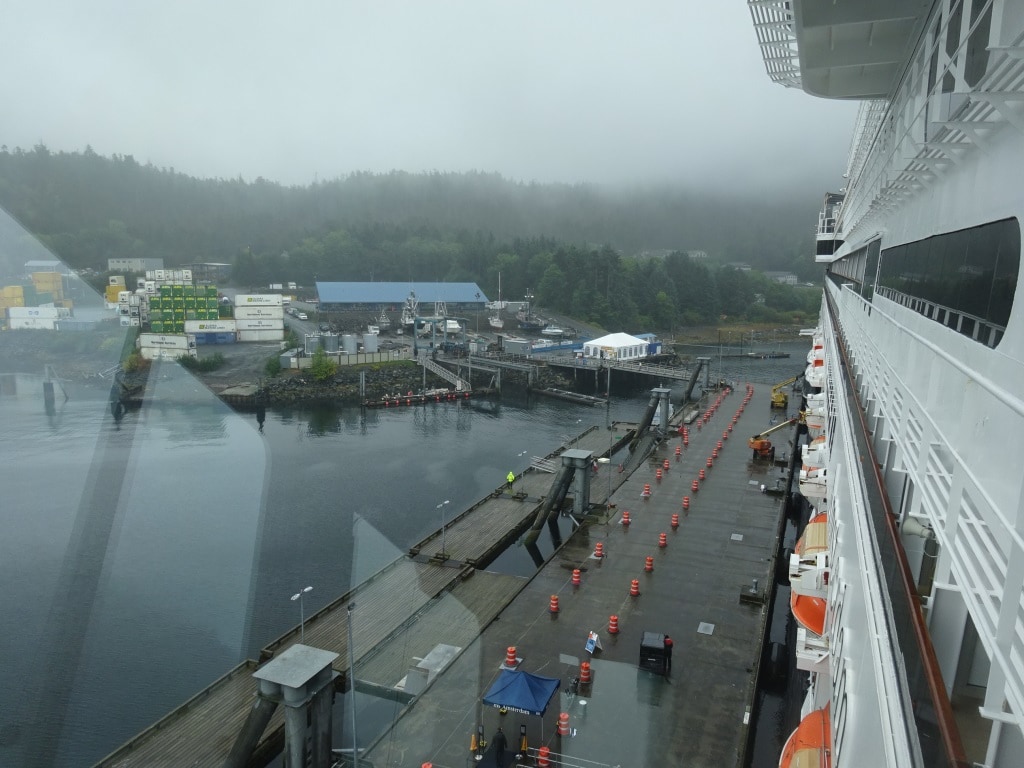 The dock as seen from the bridge of the ms Amsterdam. The white tent is a sort of Visitors Meet and Greet. Note the containers on the dock which are brought in by tug and tow.

Thus the decision was made to create one big dock in the cargo port which could handle one big cruise ship. Who was going there? We have the regular Alaskan pecking order again. Those who have been here the longest go first, if the ships are the same size. If that does not apply then the biggest ship will dock that makes the largest number of calls during the season.  If there is only one ship then of course it is easy although that ship could opt to go to anchor.

With tendering the tenders sailed straight into town. First exclusively into the Marina, which is on the East side but that upset the shopkeepers whose shops were on the west side of the town. So a second tender landing was created and the tenders would call one week at the East –Marina –Side and the next week and the West – down town- Side. If there were more ships in on the same day, those ships were equally divided over the two landing areas. We had to do a lot of work in those days to keep the shopkeepers happy in Sitka. 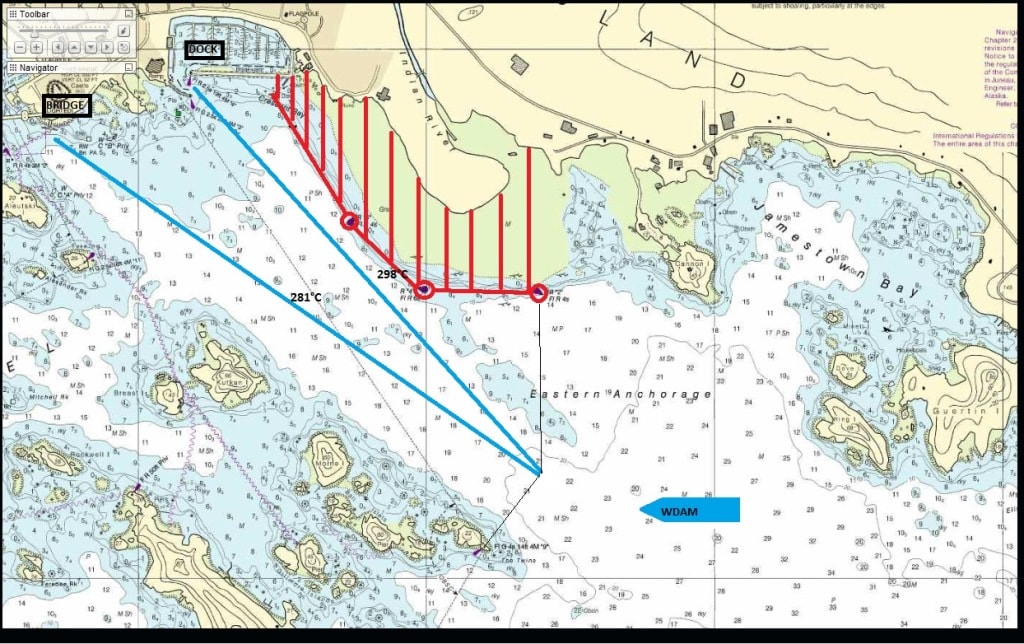 Shop keeper navigation. One week we steered 298o to the Marina and the next week 281o to the bridge dock. The blue patch of shallows is called the 7 fathom bank where we preferred to anchor.

For the guests who go to town from the cruise dock, there is a free shuttle bus system which takes them in 8 – 10 minutes to Sitka itself. For myself I still have to figure out what the best option is for the guests. Dock at the North Dock and need to use the 8 minute shuttle into town or be at the inner anchorage and have a 5 minute tender service to the shore. For us who have to run the tender service it is much better to dock. It takes a lot less labor and we do not get wet and cold while standing there conducting the tender service. If we would have had to tender today, it would have been quite miserable and very chilly. 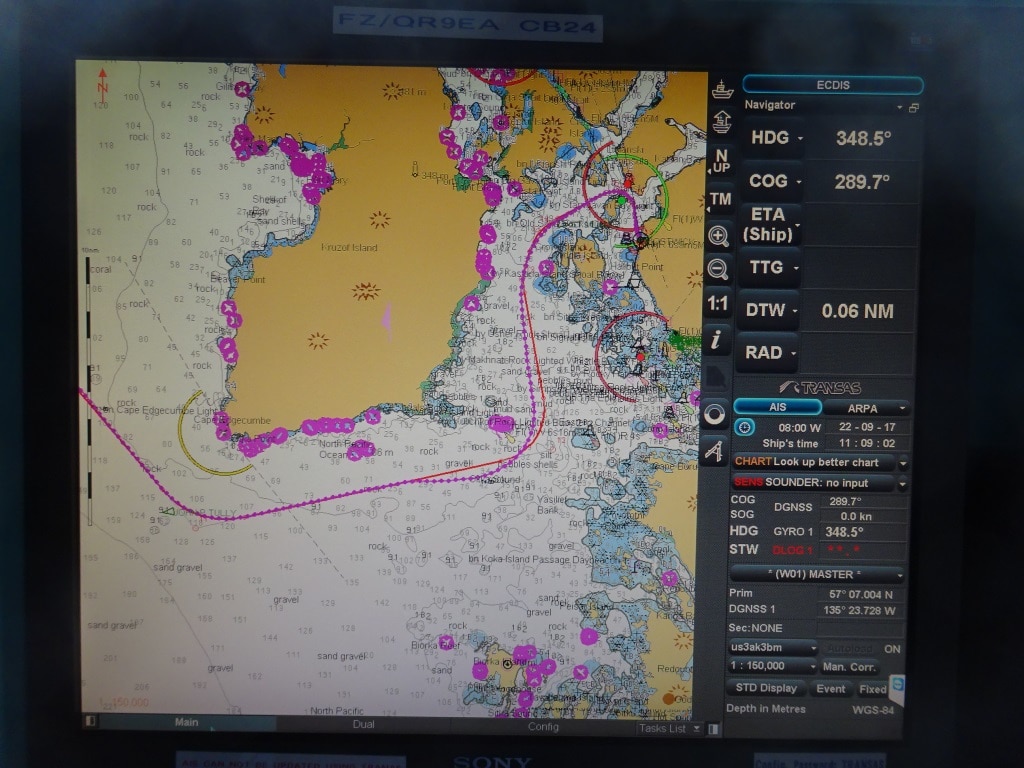 The route to the dock. When going to the anchorage you sail straight on instead of changing course to the North.

We stayed in Sitka from 08.00 – 16.00 hrs. and about half the guests ventured ashore. Those who stayed behind had either been there before or decided to wait to a next trip when it would be dry and sunny. Sitka does have it attractions though. It used to be the capital of Alaska when it was still Russian owned and remnants of the Russian culture are still very much visible. The heritage center keeps the old traditions alive and several buildings from the old days are still there. I like the place as it feels that it is the least commercialized of all the other ports, compared to Juneau, Skagway and Ketchikan.  Russian souvenirs are very much in vogue although I must admit that I saw a shop in Juneau which had much better quality.  So there is a challenge for Sitka not to lose its edge.

We sailed at 16.00 hrs. and went from the drizzle into the Fog. A large area of “very low hanging clouds” is lying along the South side of Vancouver Island and we have to sail straight through it. So the captain will be busy with honking the horn every two minutes to let the whole world know that the ms Amsterdam is in the vicinity and on its merry way to Victoria, Canada.