The Gulf of Alaska must have thought it was summer time as the sea was as smooth as could be. Just a low swell was still running from the South West but it was a really low swell and did not affect us at all. Main focus of the day was the visit at Hubbard Glacier. We normally call there between 2 and 8 in the afternoon but with days getting shorter, the captain decided to arrive at noon time at the entrance so would still have day light for the whole period. That meant cranking up the speed a lot not good for the fuel consumption but some of it will be regained again when sailing down to Sitka at a lower speed. 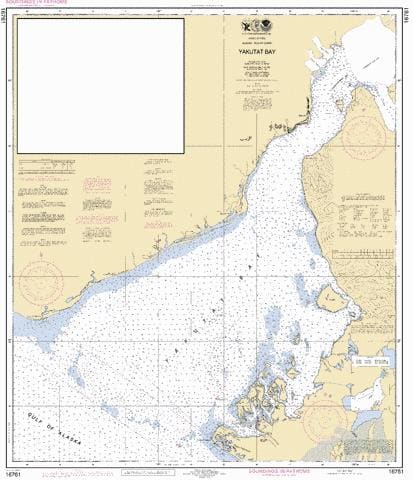 NOAA chart US 16761 showing the whole of Yakutat and disenchantment Bay. Latouche is the bump where the Bay bends to the North East.

Hubbard Glacier is located at the top of Disenchantment Bay, which is a 2nd bay behind the Yakutat Bay. The border is roughly at point Latouche about ¾ up.  The name disenchantment was given to the bay by the Spanish Explorer Malespina who thought that he had found the entrance to the North West Passage. He had not as he was stopped by an ice barrier called a Glacier and thus was very “disenchanted”. Looking from Disenchant Bay down to the Yakutat, the bays are separated by a promontory on the Eastern side called Point Latouche or Latouche. It is surmised that George Vancouver named it after the French Naval Commander Latouche. 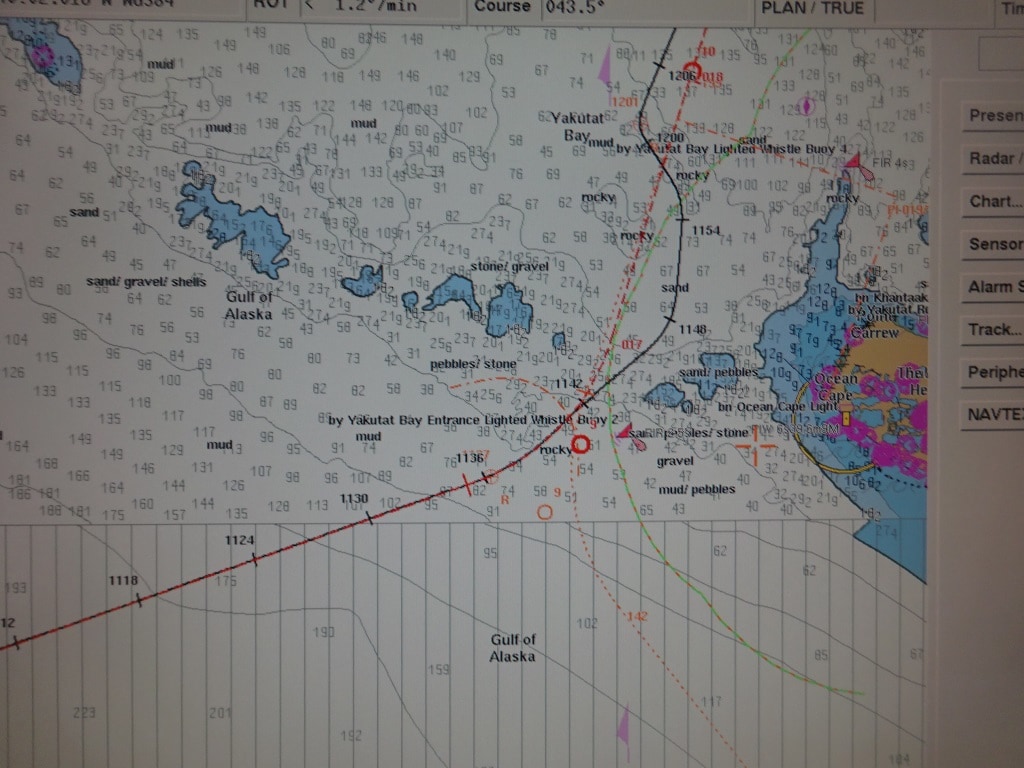 We enter the bay sailing through a gap in the shallows and then make a lee for the pilot boat. (See the black course line deviating from the red/planned route)

Yakutat is a native name or at least the English version of the Tlingit name: Yaakwdáat. And the bay is accordingly named after this town located at the entrance. When we enter the Yakutat, we are coming back into US territorial waters and that means we need to get a pilot on board. He/she boards from a boat coming out of Yakutat after having flown in from the South. The town itself is very small but it has an airport which services the whole area. Long time ago I sailed in there once with the old ss Rotterdam to facilitate a Medivac. It was quite funny as they had never had a ship that size come into the bay which forms the inner harbor and the man in charge, the local harbor master, had decided to take an extended lunch on that day and at that time. So he missed the event of the century. He gave the pilots considerable stick over it but it shows that long lunches are detrimental to work. (Although very good fun)

Once the pilot is on board, the pattern is normally to race as fast as possible up Yakutat Bay to save and create extra time for when the ship comes to the ice. You never know how much ice there will be as Hubbard normally caves a lot but can be quite erratic. I have sailed in the past all the way up to the face of the glacier but have also been stuck at an ice barrier just North of Latouche. 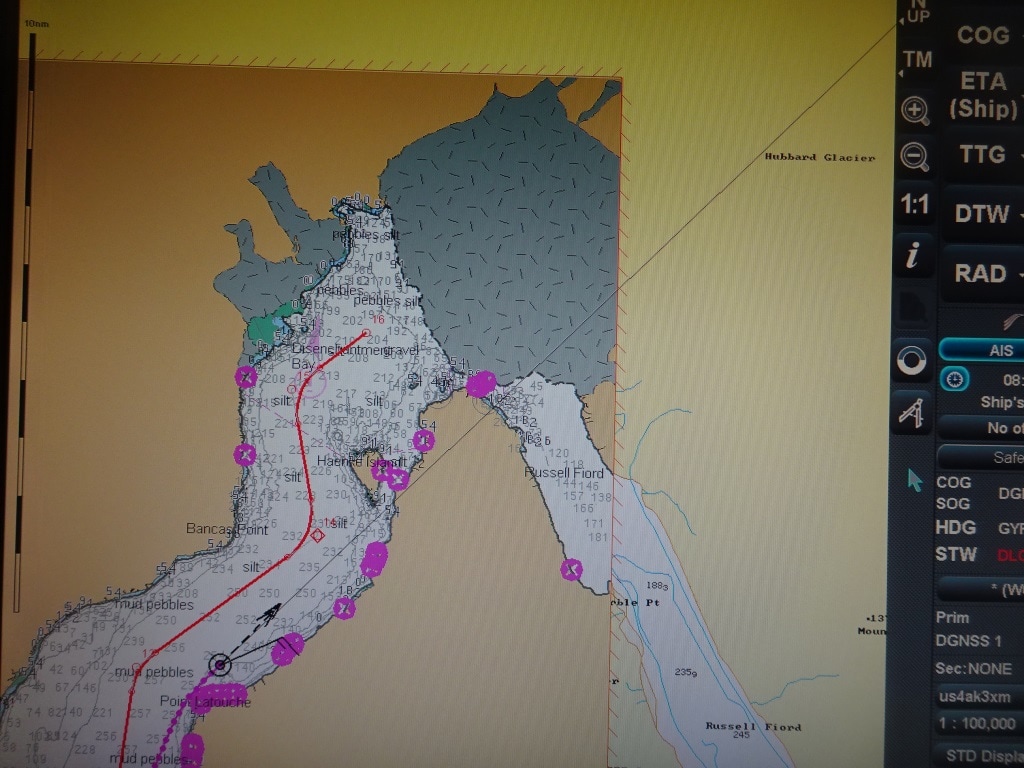 We try to sail mid channel courses but it all depends on the ice. Icebergs do not always give way to a cruise coming in and thus today the ms Amsterdam was hugging the Eastern side of the bay close to Point Latouche.

Today we had the best of both worlds, there was a lot of caving but there was also a lot of space between the ice bergs. Thus the ship could get to a nice spot south of the Glaciers face. Close enough to see the caving going on and far enough out to keep perspective of the whole area. Hubbard Glacier is immense with a face extending close to 3 miles and then there is an inlet to the East which extends the face even further. A number of years ago, Hubbard advanced suddenly and that inlet was closed off for most of the year. That caused the waters to rise inside and keep everything trapped until the water pressure became too strong and the ice burst. (Or the Glacier retreated again. I cannot remember, it was nearly 20 years ago) The environmental world was quite concerned about the dolphins trapped inside and about the danger of a deluge coming down the bay. 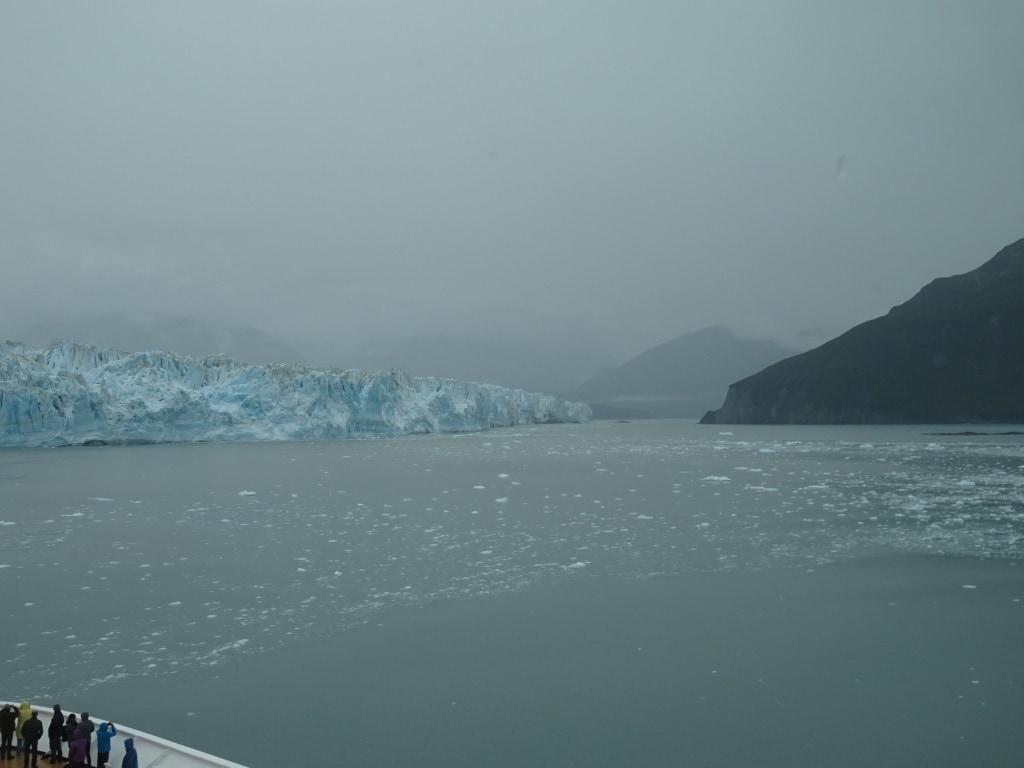 A number of years ago this side arm, called Russell Fjord, was completely closed off by the Glacier. Water inside rose 45 feet from Glacier melt water and rain until the opening burst open again.

We had a rainy day in the Yakutat but it proved my point once again: with overcast skies, the natural blue colors of the ice are much better visible than with a lot of sun light. 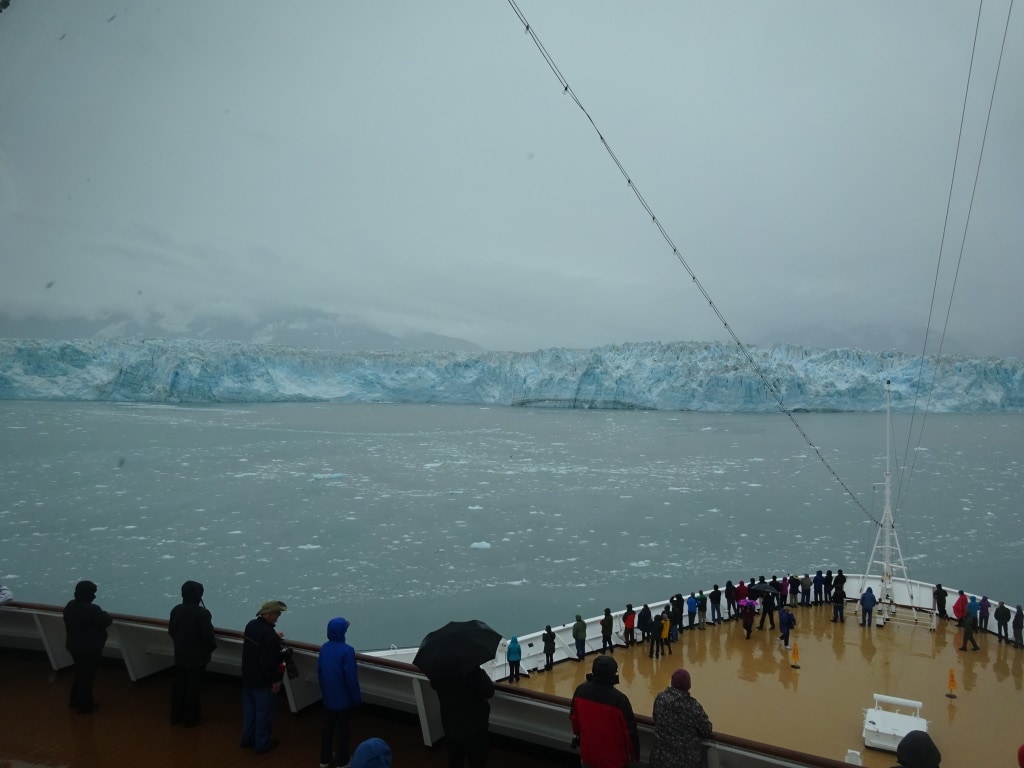 The true blue colors of a Tide Water Glacier.

Tonight we will sail down to Sitka where we will be docked by 08.00 hrs. in the morning. Sitka has had a dock now for some years but it will be a first for me, as I always was assigned an anchorage in the past.

Weather: Overcast with a chance of showers, no wind predicted and temperatures around 55oF. or 12oC.