Akueyri is just a hop and a skip away from our last port of call and thus our schedule called for an early arrival. We had to be docked before 7 am so the invasion of the town could commence on time. 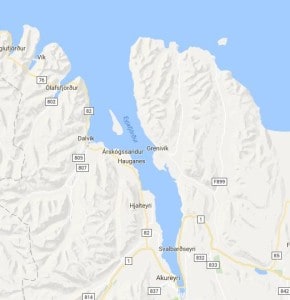 Akueyri is located fairly deep in a fjord and thus it takes a while to sail into it. The cruise terminal is located at the south side of the town and then the fjord ends in a sort of big and deep pond where ships can safely anchor as well. The fjord itself continues with what I would call a river coming from the inland but you cannot sail on it. Even if you wanted to try, you could not, as the locals have built a bridge over it to get around the fjord /bay.

The town and area is very well liked by Icelanders and many have a 2nd home here. If you pretend to be somebody in Reykjavik then you have to prove that by having a 2nd home in Akueyri somewhere on the mountain slopes. 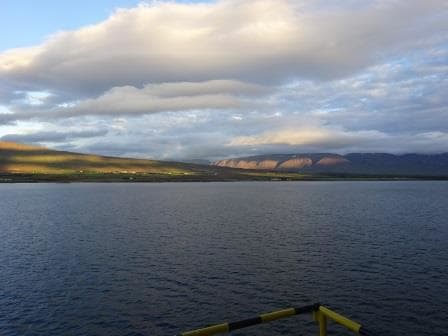 All the white dots are not farms but 2nd homes, for summer and christmas.

According to one of the linesmen (those are the gentlemen who pull the mooring lines ashore) I talked to today it does not work the other way around. If you are an Akueyrian and you would you have a 2nd house in Reykjavik it would not make you more important locally. People would just say, what is he/she wasting his/her money on. 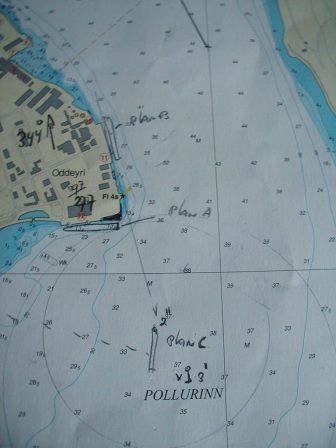 For the weather there are three plans. If too much wind at Plan A, we shift to Plan B and docked nose or stern into the wind and if that does not work we go to Plan C; anchor.

The only challenge this port has for cruise ship sailors is, that the wind is often blowing through the fjord in an almost North / South direction. The cruise ship dock is in an East /West direction and docking with a northerly wind means fighting against it to come along side. From the south it helps you with docking but then you have to hope that you can get off the dock again on departure. Today the weather was fully in synch with our cruise schedule. On arrival the wind pushed us to the dock. At mid morning and early afternoon it was sunny and wind still and by 3 pm the wind had turned to the North and pushed us off the dock again. How lucky can we be? 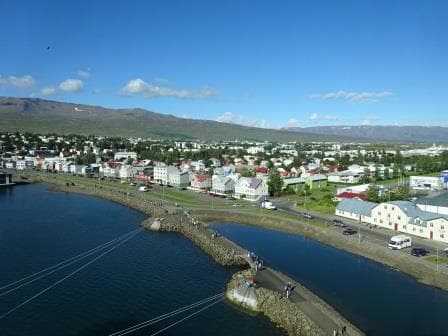 The Koningsdam bridge view, high above the town. Many guests walked the streets and even climbed all the stairs to the church.

Having nice weather is always a bitter sweet experience for a captain if you depart early. Today the sun shone and the temperatures were very pleasant and thus a lot of guests came back at the very last moment.  They then still have to be processed by security and that takes time and thus we could not completely adhere to our 15.00 hrs. departure time. So sometimes we pray if the schedule is tight, can we please have a short shower about an hour before departure? It really helps with getting everybody back on board in time. But once we could go, we could employ the blow-away maneuver which always makes life easier.

Akuyeri was blessed today with two cruise ships. In the late morning a little one came in called the Ocean Majesty. 16000 tons and a maximum of 700 guests. I think this year she sails charters for a German company. I know her well, in the past my wife worked on it as a tour escort and I tagged along twice to see ports where even the Prinsendam could not get into. It is in the blogs somewhere in summer of 2009 when I broke the golden rule of only blogging about HAL and blogged the Greenland cruise this little ship made. It was then chartered by an English company and the whole cruise on 3 star level was a real happening. Basically the way we used the sail in the 70’s and 80’s. Not too many rules and regulations and slight touch of dis-organization thrown in, to keep everybody sharp. It is nice to see that she is still going strong.

Now we start crossing the Norwegian Sea on our way to Aalesund in Norway. The weather looks very good with hardly any wind. So hopefully that will not result in a lack of visibility. Iceland is two hours behind the continent and thus we have to go two hours forward to get into tune with Norwegian Life. The first one will be tonight.