It was a very small world this morning when we arrived. The good thing was, it was nice weather, the bad thing was, we could not see it. 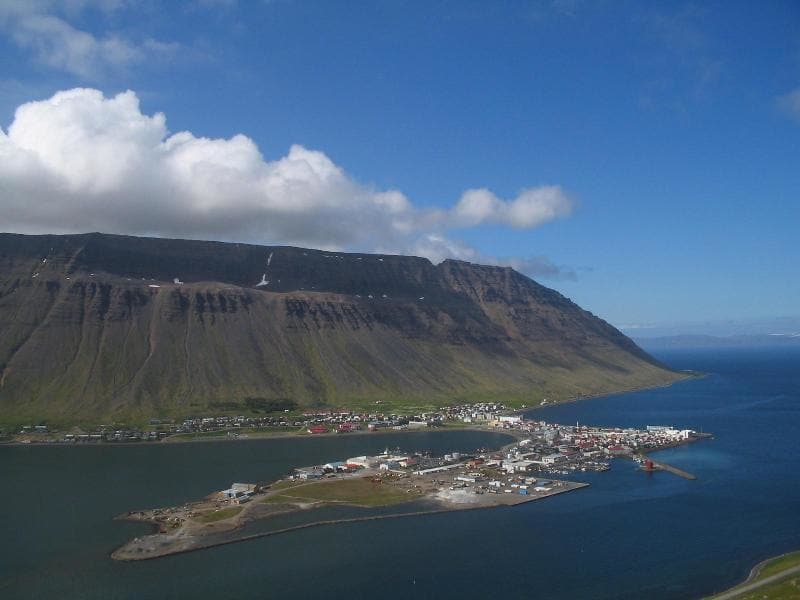 This what we should have seen on arrival.  The dock is in the foreground and we tendered to where the red tower is located. The ships anchorage is to the right just off the photo. (Courtesy, somebody who donated to Wikipedia)

And thus the deck department of the Koningsdam went to battle stations. We have qualified tender drivers on our tenders who are trained and before they receive a certificate of competency have to do a practical and theoretical exam. However when we cannot see anything then the company requires Officers on the tenders who have full nautical licenses. I was this morning on deck early to see if my students…. Tender operators in training……. were doing what they had been told; everything according to the rules and regulations.  Which includes safe working practices; executed in the correct sequence and it all with good communication.  In a few days’ time they will have their exam and I do not like anyone of them to fail. So we train from early morning to the end of the working day on the job, if we get the chance. 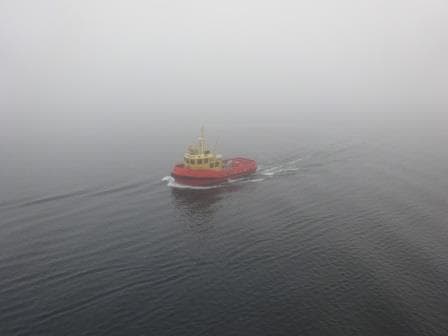 That is as far as visibility went. The pilot boat at 15 meters away and it was worse on the anchorage.

The Koningsdam has six tenders and we were expecting that the guests would be very eager to go ashore as soon as the ship was cleared by the authorities. Thus the staff captain decided to put six tenders into operation at once. And then I was drafted in to help so one of the regular navigators could have a bit more rest before starting.  We did not get visibility until 11.30 and thus I had the chance to play around with a tender for most of the morning. Always fun to do……………… boys with toys……… you know what it is. It also made it possible to continue training 2 of the sailors, who were on the tender and who had to report in after each run and explain what I exactly did with the engines and the rudder for docking and undocking. Thinking about your maneuver is the first step to safely executing it. The guests who used tender 20 had the experience of having the most expensive tender driver of Holland America Line taking them to the shore and back. 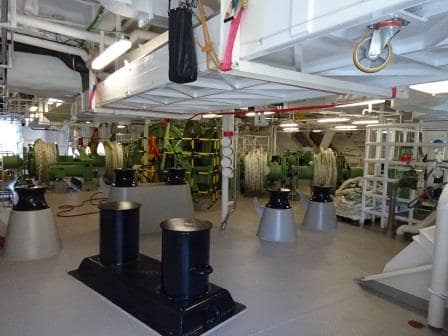 The Koningsdam mooring deck with the starboard anchor winch, note the clean deck.

We have to anchor in Isafjordur as the dock is too short for the Koningsdam and we cannot overhang here as there is no deep water beyond the end of the dock. I asked the Harbour Master if there were plans for an extension and he said they were talking about it already for three years. I suppose Icelandic winter months are long and thus they take their time and are not in a hurry, but it would help their business. There are companies with large ships who will not anchor and thus simply will not call at a port without a dock.  Extend the dock by 50 meters and you get thousands of more eager shoppers to come in. 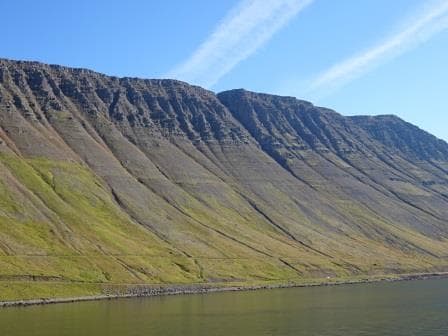 This is what we finally saw after 11.30 in the morning.

The fjord where we anchored is nice and sheltered from easterly and westerly winds. That was also the reason why it took so long for the visibility to return. First the sun had to peak over the mountain tops and then it had to warm up the land and the air to get the water saturation out of the air. But for safe anchoring it was a great day today. No wind at all. If there is a strong (and very cold) northerly wind blowing or a Northwesterly then it blows straight in and then it is sometimes impossible to be here. Today it was good and we anchored in about 30 meters of water and put about 150 meters of chain behind the anchor. 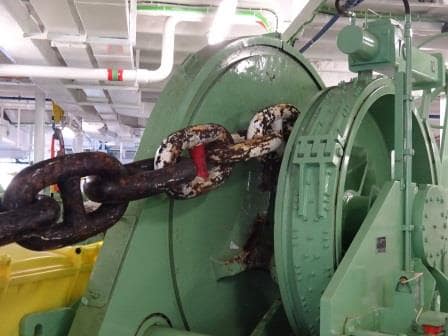 The anchor chain coming in. Each length of 15 fathoms is marked by white chain with a red stripe so we can count them more easily when coming out of the water.

A lot of people think that it is the anchor which is holding the ship in position. That is not the case. The anchor is just the hook which sits at the end of the chain. The chain lays over the sea bottom and its weight and friction with the sea bottom provides the force to keep the ship where it is. The anchor is only a tool to stop the anchor chain from slipping. The holding ground in Isafjordur is very good. Extremely heavy mud which really sucks the chain in. Thus on the departure we had quite a job in getting the chain up and eventually the anchor. Heaving slowly on the winch, not just to get the chain up, but also to give the sailors time to clean the anchor before it went into the chain locker under the winch. It created a very nice muddy mess on the deck and the Bo ‘sun was not a happy camper. 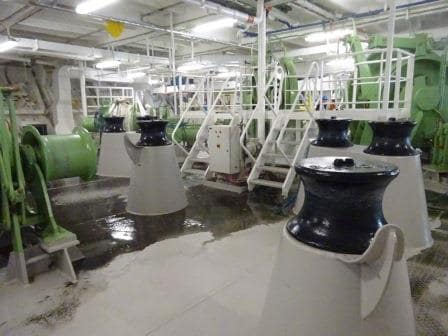 Using the fire hoses to get the mud off the chain made a nice mess on the deck.

Tomorrow we are in Akuyeri and here we dock. They have three docks and one is officially assigned as the Cruise ship dock but we can use any of the three if needed as long as there are no fishing boats in the way. We will have basically the same weather as today; 18oC / 64oF and sunny skies so we might have to find the dock without seeing very much if it goes the same way as today.