Well, it was not an exciting day today as far as the weather is concerned. You always think about Iceland as covered in snow and with a cold wind blowing or dry with erupting volcanos in the distance. However they also have drizzle here. Lots of it. It took the local weather station all day to get rid of it and it all fell on the Koningsdam. Only just before departure the sun peaked through, as if to see if we were still there. 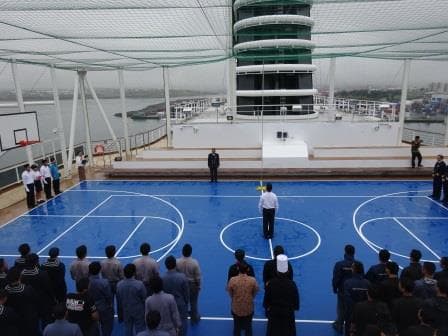 Calling everybody to attention for the commencement of the 71st. Indonesian Independence Ceremony.

That drizzle was not appreciated by me as I was having the sailors play with the tenders again today but it was even less appreciated by our Indonesian Community who were celebrating Indonesian Independence day. The day is officially the 17th. of August but that was tender day in Edinburgh and during such a day nobody has time. This year it was the 71st celebration since independence was declared in 1945 and over 71 years a few days later do not make much of an impact. There is always a ceremony and this took place this time on the Sports Deck………. In the drizzle. There is a standard procedure for this and the whole evolution takes about 10 minutes. 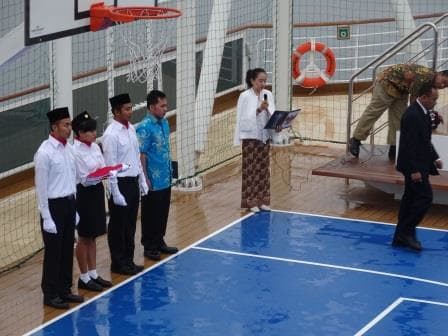 One of our ships ladies reads out the start of the ceremony.

It starts with the calling to order of all the crew present. Then the invited guests are lined up (headed by the captain) and then the commander of ceremonies steps forward. 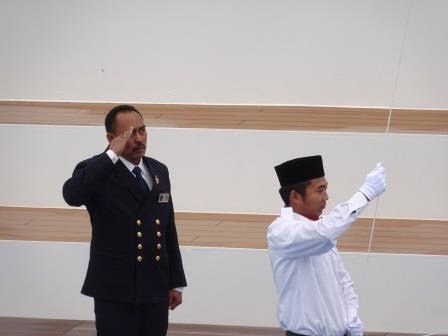 The commander of Ceremonies, the Ship’s Bo’sun.

(Normally the Bo ‘sun, in being the most senior Petty Officer on board) We have Indonesian officers on board but somehow the Bo ‘sun is always the big man. He approves the start of the ceremony and then three crew step forward to raise the flag. As we nowadays also have Ladies from Indonesia in the crew it means that one of the flag bearers is a Lady. 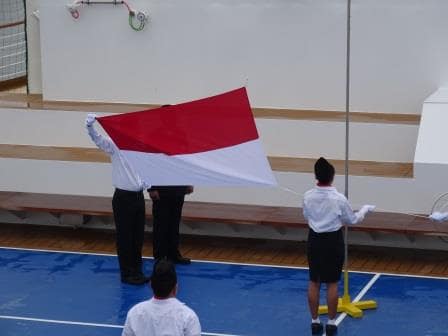 In 1945 it was not possible to create and distribute a new flag. so the solution was use a dutch flag, as there were plenty of those around, and remove the blue part and thus have a new country flag.

During the hoisting of the flag, the Indonesian anthem is sung while the flag goes up. Then there is a minute of silence for those who have fallen for their country and that is followed by the reading of the Indonesian Independence Declaration. 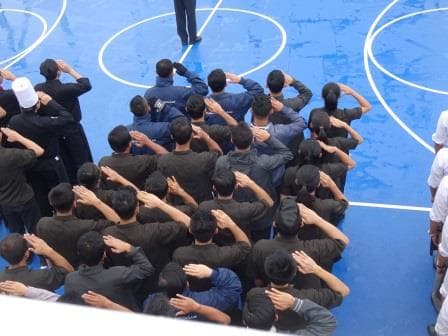 A section of Housekeeping saluting the flag.

The man who issued it, Mr. Soekarno Hatta, must have been a man of few words as the declaration is not very long. I always thought if you issue such a momentous statement which is the start of a new country, you would have spent a few more lines on it. But it is short and to the point. 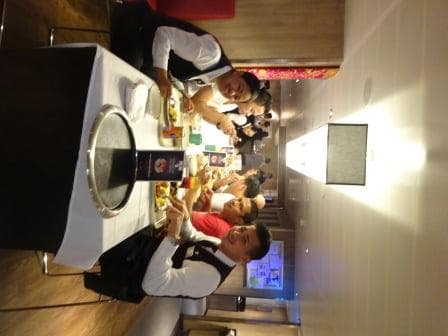 Special Day, Special Food. This is philippino crew but they also like a party and Indonesian Food.

The remainder of the festivities consists of a dinner, which was held this afternoon and a party, which will take place in a few days as tomorrow we have another tender port so everybody has to go to bed early tonight. So this year the Indonesian Independence day has been split in three parts. Quite unusual but what else can we do. 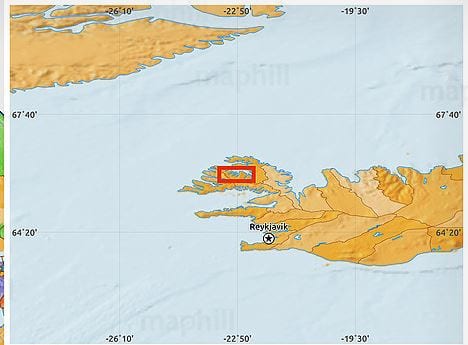 To get to Isafjordur we have to sail all the way to the top of Iceland. We just miss the 66oN.

Our next port of call is Isafjordur located on the middle north part of the island. It is located just south of the Arctic Circle (66oN). For me it is basically the quintessential port in Iceland. The area is bare and stark, in the middle of nowhere and a large mountain ridge looms over the town. If you think about Iceland, then this is what is on your mind. And that is why we are going there. To sample the real Icelandic situation. It has a nice port but the R class of our company (Rotterdam, Amsterdam, Volendam, Zaandam) are the longest ships that fit in. Anything longer and part of the ship will be stuck in the mud. Not something a ship is built for and thus we have to tender.  Sailing in is very scenic. Luckily for those who do not want to get up at 05.30 in the morning, sailing out is very scenic as well and then you can see it all after the 17.00 hrs. time.

The drizzle is supposed be blown away by an increasing wind and that will bring sunshine with temperatures of 14oC / 15oF.  If the wind does what it has told the forecasters then it should not be of any concern. It is supposed to blow from the East and that puts a big mountain between the wind and the ship.