During the evening the wind and waves picked up further but the Koningsdam surfed nicely and we had a steady ride. By this morning we were completely outside the influence sphere of the bad weather near Ireland and it turned into a nice and sunny day.  A nice happening was the passing by of the Prinsendam last night which was coming from Iceland and on its way to Europe. We passed her at 18.00 hrs. at a one mile distance, which at sea is the regular clearance distance that we have to maintain. Certainly when both ships are going at full speed. The Prinsendam guests had an unexpected surprise as they got an announcement from Capt. Emiel de Vries. The Master of the Prinsendam, Capt. Tim Roberts thought it good fun to hold the vhf speaker in front of the ships P.A system so the captain on the biggest ship in the fleet could say hello to the guests on the smallest ship. I do not think we have ever done that before. 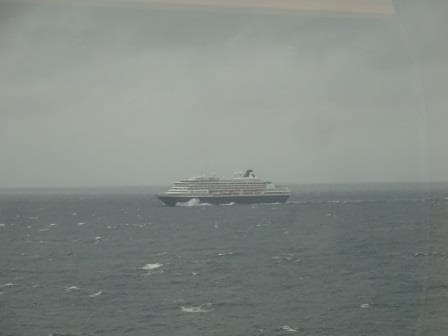 The ms Prinsendam charging East bound at 18 knots. The Koningsdam was going Westbound also with 18 knots. Hence the passing was quick with a relative speed of 36 knots.

Coming from the South East you sail to Reykjavik via the south side of the island and that means by 08.00 in the morning we made landfall and could see the coast. By 10 am we were so close that the buildings on the land were clearly visible. On the south side there is quite a bit of Industry, including agricultural with green houses and from those you could see white steam leaving the chimneys. Most of that white steam is heat, freely available in Iceland due to the volcanic action under a very thin crust.  It also pays for cheap heating costs in the winter. The whole city is under tunneled with a large piping system which brings boiling water to every house in the area. I have been told that houses which are more outlying have a private system. As it is not expected that this volcanic action here will stop in the foreseeable future, people will not have any problems with keeping their houses warm. 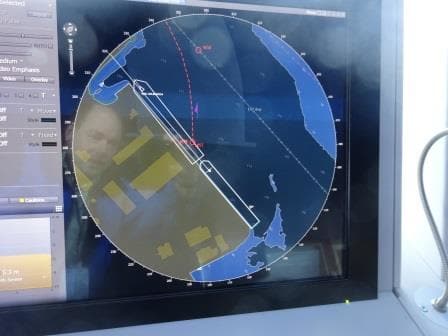 The Radar screen shows it clearly……… the dock is full.

Reykjavik had to deal with a luxury problem today: two big ships in port. We had also the MSC Splendida in which had arrived earlier. Both the Splendida and the Koningsdam are too long for any of the other piers and thus they had to share the main cruise pier. And that only just fitted . The Splendida only had bow lines going sideways and the Koningsdam only stern lines going sideways and the ducktail of the ship was still sticking out. I have seldom seen two ships so using a dock space in such an optimum way as today.  It is not ideal to have the mooring ropes under a 90o angle, as the better the spread, the better the ropes can hold the ship against the wind or passing ships which might make the ship surge. Today with the good weather it was less critical and the most important item of mooring today were the spring lines. They keep the ship from moving aft or moving forward. Extremely important for the gangway but today also for not drifting into the MSC Splendor who was docked quite close once the local authorities were happy with location of the Koningsdam. 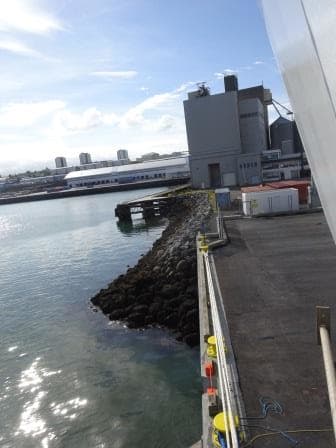 When we park the ship for an overnight stay we increase the mooring lines with at least two more lines. Would we normally dock with 4 and 2 (four lines going forward and 2 –spring-lines going aft) it would then go up to 5 & 3. Due to the unusual configuration today the captain decided for 7 & 3 and that will keep the Koningsdam happily alongside. Two people, who will not be happy, will be the sailors who constantly have to adjust the ropes. The ship docked at low water and then it only went up. And as it was spring tide today, it even went higher than normal. So the good ship Koningsdam was taken up by a big hydraulic elevator to a height of 14.0 ft. or 4.27 meters. And then after 19.51 hrs. tonight it will go about the same distance down again. In the coming days when the spring tide influence fades away, the tidal difference will go down to 9 feet and maybe even less.

This means the lines have to be paid out (given slack) or heaved in (made tight) to allow for the height difference, continuously,  while at the same time keeping the ship alongside the dock and the gangway free of movement. 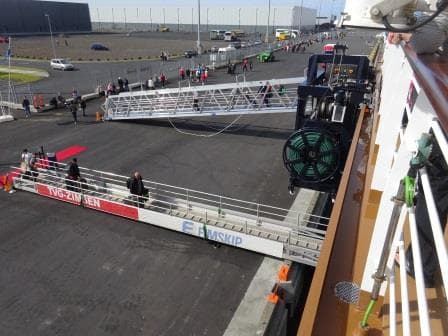 On arrival we could use two gangways as the tide was just starting to go up and thus nearly 3000 guests could march ashore without much waiting.

To make dealing with this height difference a little bit easier, the port has made available two long gangways. One for the gangway door which will be above the dock at high tide; and one which will stay above the dock even after going down by 4 meters for the low tide. Guests will be going on and off all day and night as in Iceland we also run tours in the evening and thus constant access to the ship is critical.

For the weather tomorrow we will have to look and see. In the late afternoon a weak frontal system moved in with overcast skies and those skies might have some clouds which will produce showers tomorrow. And that will bring the temperatures down to 58oF or 14oC. Luckily the water of the blue lagoon will be warm. Also courtesy of all the volcanic action.