Once we were clear of the coast and the sun disappeared for the night, a white blanket descended over the Norwegian Sea. Thus the Navigators went to Reduced Visibility Navigation (Which means a senior officer is added to the team and if that is not the captain, then he remains nearby on short notice) and started sounding the whistle every two minutes. That is what the law requires and thus that is what we do, even if the guests with balconies right under the whistle are not very happy about it.  Unfortunately when you select a cruise which involves Greenland or Iceland or the North West side of Norway (including Spitzbergen) then there is a fair chance of losing all visibility around you. It is either that or bad weather. 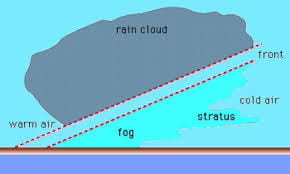 What happens in the sky. Borderline between water vapor and no water vapor.

Why are all those white clouds coming here and insist in coming all the down to the water line and why are they not staying up high in the sky and bother airplanes and not us?  Our fog is similar to clouds high up. Clouds are made up from condensed water droplets which are the result of the air being cooled to the point (what we call the dew point) where it cannot longer hold all of the water vapor it contains. Clouds form when rising air cools from expansion.  Secondary factors such as pressure and turbulence cause the shape of the clouds.

That is what we had today. Although the difference between warm and cold was not that great.

In our case we are dealing with clouds which form above the water. And also that has to do with temperature differences causing air to cool.  But because the water temperature is not always constant and the air temperature over it neither, it is not easy to predict when fog will exactly happen and when not.  In our case today, it is caused by a gentle easterly breeze. Not much but just enough. It brings warmer air towards this region where the water is colder. The Gulf Stream splits in two halves under Iceland, one arm doubles back to go west under the Icelandic coast and one arm continues over the North Atlantic towards Europe. That 2nd arm is causing the problem. Here the warmer water has warmed up the air, the sun has been helping a little bit as well and then a gently Easterly Breeze carries it towards the Norwegian Sea. 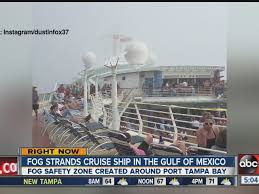 The port of Tampa is notorious for reduced visibility in the winter. And when you cannot see, the port closes down. (Courtesy ABC Action news)

If there is fog, then the sun can help. It is by no means certain that the sun “will burn the fog away” but if the temperature range is close enough, it will. That is what we saw in Isafjordur. Thick fog but no wind to start with and then when the sun started to warm up the land and the sea surface the warmer air caused a different dew point, the water droplets evaporated again and visibility was restored.

Today there is not much wind and the sun has to warm up a large area of water, which is much slower to warm up than bare rock, and thus visibility is struggling. It took today nearly to 1 pm. before visibility became more than three miles. The magic number was we are allowed to stop blowing the whistle.  We are not expecting much wind to happen in the next 12 hours and thus the “low cloud” situation could return in the evening. Unless of course we come to a warmer patch of water which will affect the air cooling down. This makes it also very difficult to exactly predict when fog will happen.

So we will continue our voyage towards Norway. At noon time we were 170 miles north of the Faroer Islands and about half way.  By mid-morning tomorrow we will approach the pilot station of Aalesund and dock about an hour later. If the water temperature remains the same then I expect that the weather situation will remain the same and the whistle will continue to blow every 2 minutes, until we come close to Aalesund.