To sail from Puerto Chiapas to Huatalco means crossing the Golfo de Tehuantepec. And there you can have this very nasty funnel wind. It seems as if it starts out of nowhere, it does not go anywhere, and it stops as abruptly as it starts but it can reach winds speeds of up to 50 knots or even more. Predicting it is not easy either as it depends on the weather in the Gulf of Mexico. But this time they did predict it and both the pilots in Chiapas and Huatalco were confirming the expected bad weather. So for us the first question was when? 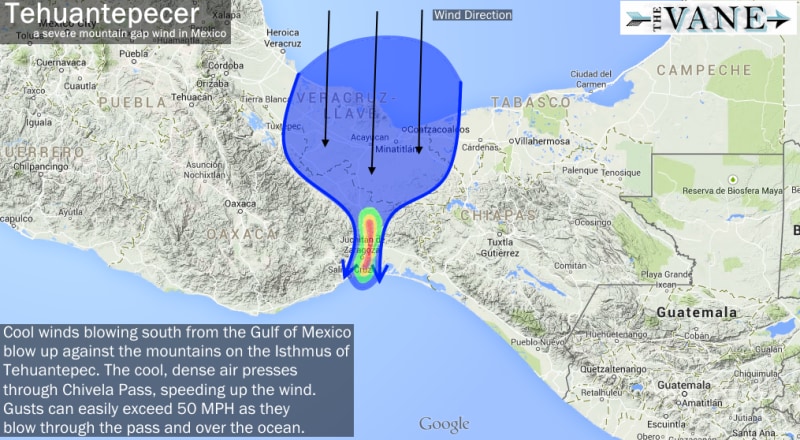 This is what is causing this local wind. Wind being pushed through a small gap in the mountains. (Diagram courtesy: website: The Vane)

A Tehuantepeccer wind is caused by a weather front that drops down from the Gulf of Mexico instead of going up inland. If this happens, then it pushes a high pressure system into the curve of Mexico which on the Caribbean side ends up near the Yucatan Peninsula. The mountain range running down the middle of Mexico keeps that pressure system in the Carib or the Gulf. But there is a tiny gap where the mountains are less high. That tiny gap gives access to the Gulf of Tehuantepec. So the pressure can get through and is pressed into a small gap and thus increases in velocity. On the Pacific side you have the town of Salina Cruz right in the gap and Huatalco and Chiapas on either side. When the wind comes through, it keeps intensifying as it feeds off the warm water until the sheer size of open water lets it disperse. 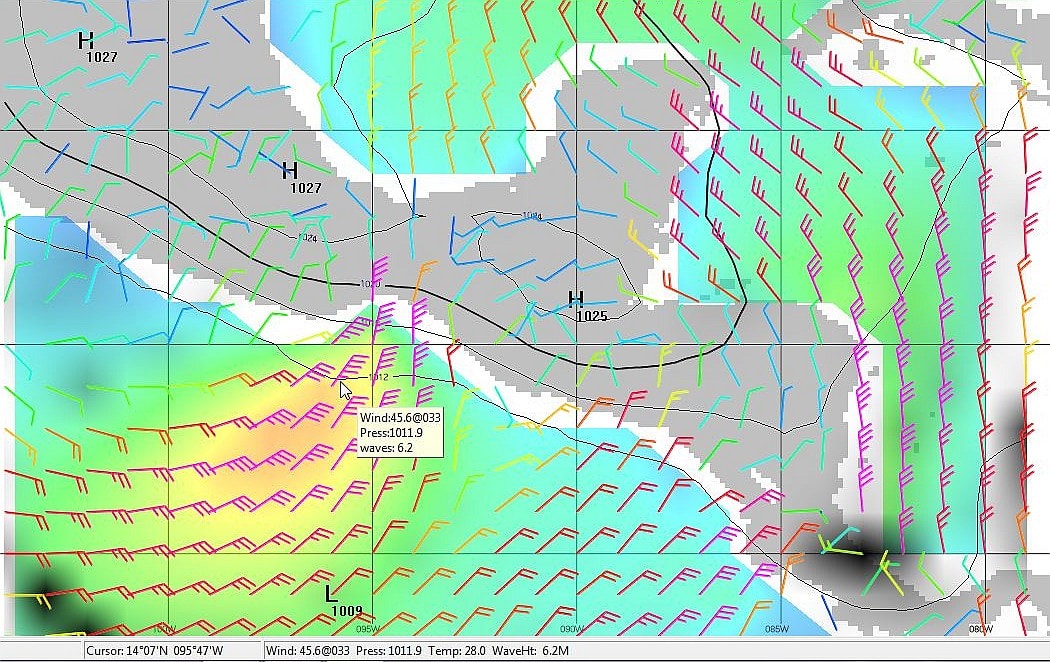 This is what we do not like. the wind field is fanning out to the West and Huatalco could just be affected by it.

The important part for the sailor is the angle of the vortex of the wind. If it is perpendicular on the coast, then yes we will get a lot of wind while at sea but the ports will not be affected. If the wind blows under an angle into the open sea, then either Huatalco or Chiapas can be affected. Luckily for the guests, it is a land wind so it does not bring much swell that can make the ship rock. So while in Chiapas the bridge kept a close eye on the weather charts that are received every day and it did not look that the wind would start to blow until we were well past the middle of the Gulf. So we could get to Huatalco without too much wind. Once at the pilot station we could then see what would be the wise thing to do.  Go in or stay out, depending if the wind would hit the port or not. And thus the ms Westerdam set sail with high hopes for not having any challenges.

And then the pressure system in the Gulf did not want to drop down so the Tehuantepeccer never started to blow at all. We arrived with flat calm seas and a sunny sky at Huatalco and slipped into the port without any issues and the wind, any wind at all, never materialized. The skies remained sunny, the wind stayed away and luckily it was not that humid either, so we had a very good day here. Our guests did not come back all that hot and bothered from their sightseeing as sometimes can be the case in Mexico. Huatalco is a tourist resort created by the Mexican Government and as part of creating work for the locals also the cruise pier was built, which now is servicing cruise ships nearly every day. Most of the tourists that I see, if they are not coming from the ships, are locals from the nearby larger towns. Huatalco is just the beach front area with the bars and hotels. The inland part is called La Crucecita, close by but on the other side of a small mountain ridge and not visible from the ship and or the resort. 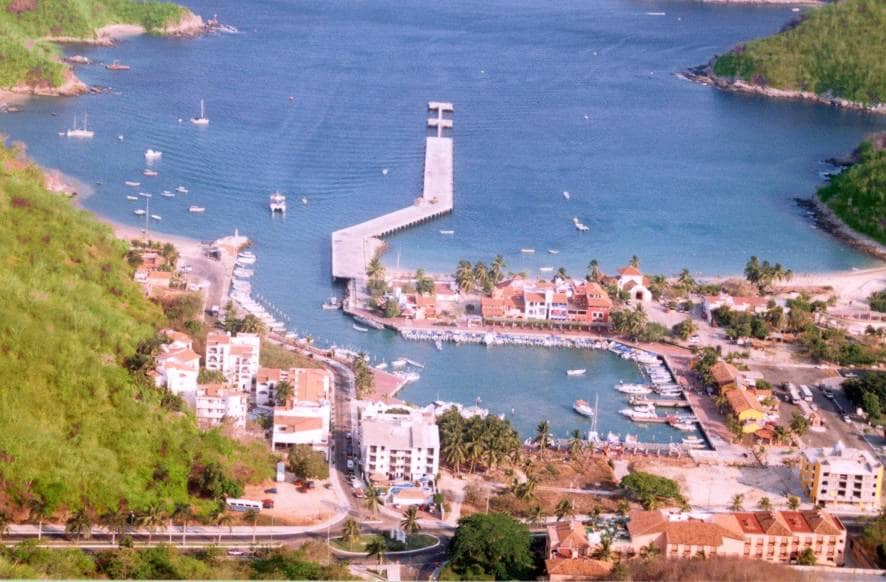 The resort of Huatalco. Two big ships of the Westerdam size fit at the pier and there is room for one ship at the anchorage. Then the ships tenders dock all the way inside the little marina.

We stayed until 18.00 hrs. and then backed out of the bay to head North West to Puerta Vallarta. Tomorrow we are at sea and as we now go from the far south of Mexico to the border of Mexican California, it is a high speed run with an average of 19 knots to maintain. The weather is supposed to hold, with clear skies and smooth seas. So we should be able to see dolphins and turtles.