It is always nice when King Neptune cooperates with our wishes and desires. And he did today by directing the ocean swell to run along the shore and not into the breakwater and entrance to the port. Not too long ago this area had a heavy earthquake and although Chiapas on the coast itself was not hit that much it caused some underwater land sides in the estuary which reduces the depth. The dredgers had been out in force again to make sure that there was enough water again to get in and out………….. under normal circumstances….. but the depth was still a meter short of the standard. Which meant that if a swell had been running, we would have had at least one meter less to play with and that would have been a 10% reduction of the normal depth. Very nasty.

However we were in luck and we did not have to worry. The very minimum depth observed under the keel was 1.6 meters, or 5 feet, which is not much but if there is no swell, we can happily live with that. I have docked with less under the keel and as long as you move over the shallows at a slow speed then you can work with small margins without any difficulty. And thus without much delay we docked at the passenger terminal for a nice and sunny day in Mexico. Swinging around on arrival so we would have a clear shot out in the evening; just in case the wind would pick up in the afternoon. 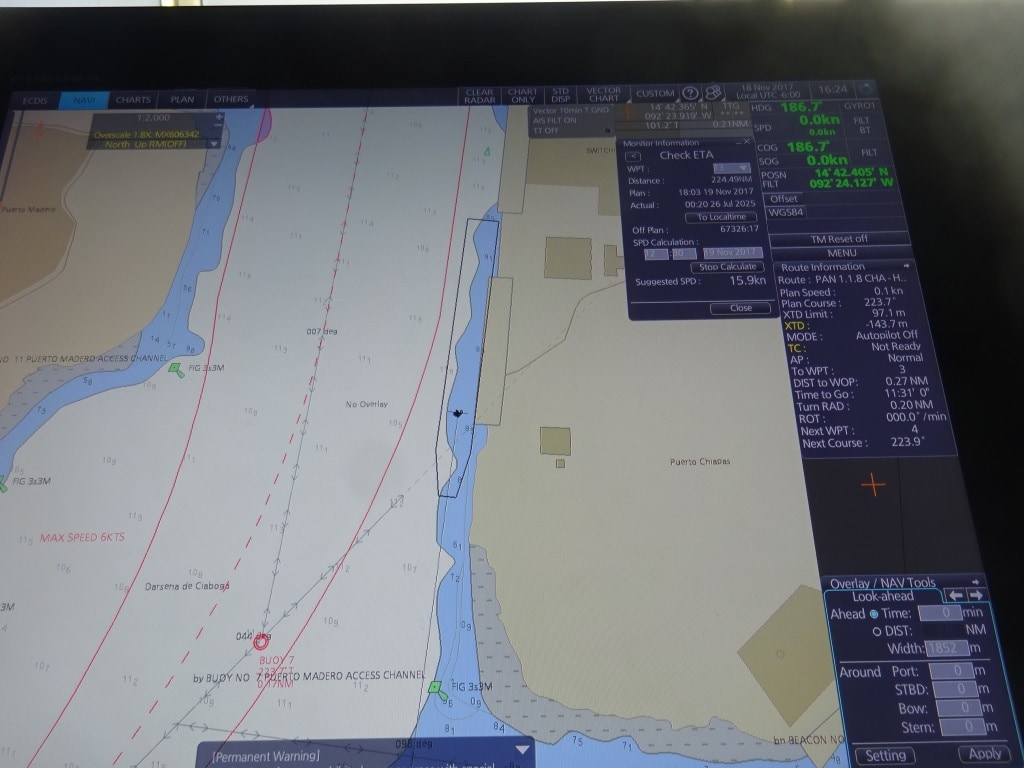 Still docked alongside. First part of the maneuver is to go sideways and get onto the dotted line, and what ever you do remain in between the red lines as they indicate the safety boundary’s.

Puerto Chiapas is also a port which is ideal to train new officers in conning the ship as sailing out only entails 3 small course changes and slowly increasing in speed while doing so. Ideal to get a feeling for the ship, especially when you are just starting with practical ship handling. Thus today the 2nd officer of the 4 to 8 watch was going to have “the conn” supervised by the Captain, the Staff Captain and the local pilot. In the good old days junior officers seldom got the chance to play with the ship and then were sort of stuck when they became close to being captain. In those days pilots did most of the maneuvering as it always involved tugboats so the captains themselves were not that experienced either. Then came the bow and stern thrusters and the whole ball game changed. In the beginning power was marginal so you needed a quiet day for training but now we have so much power that the captain can always carry out corrective action if something happens. 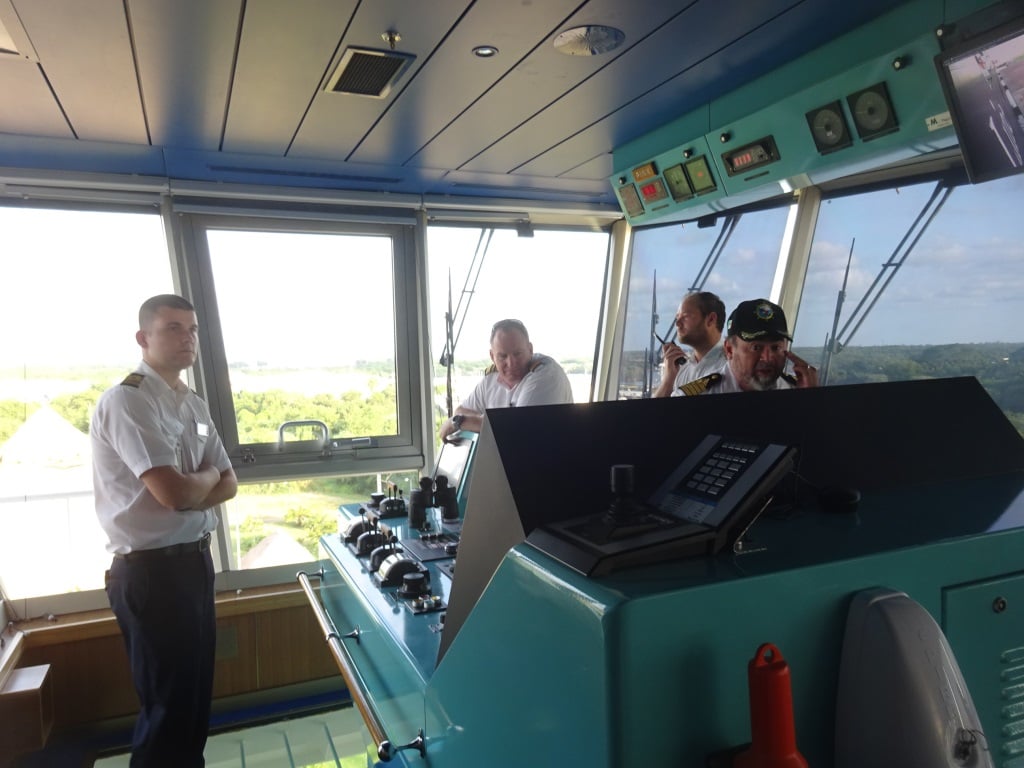 To give everybody a chance the bridge teams are nowadays built up in such a way that you can easily rotate without taking the overall responsibility away from the Master. Team members can just assume different functions.  So today we had: 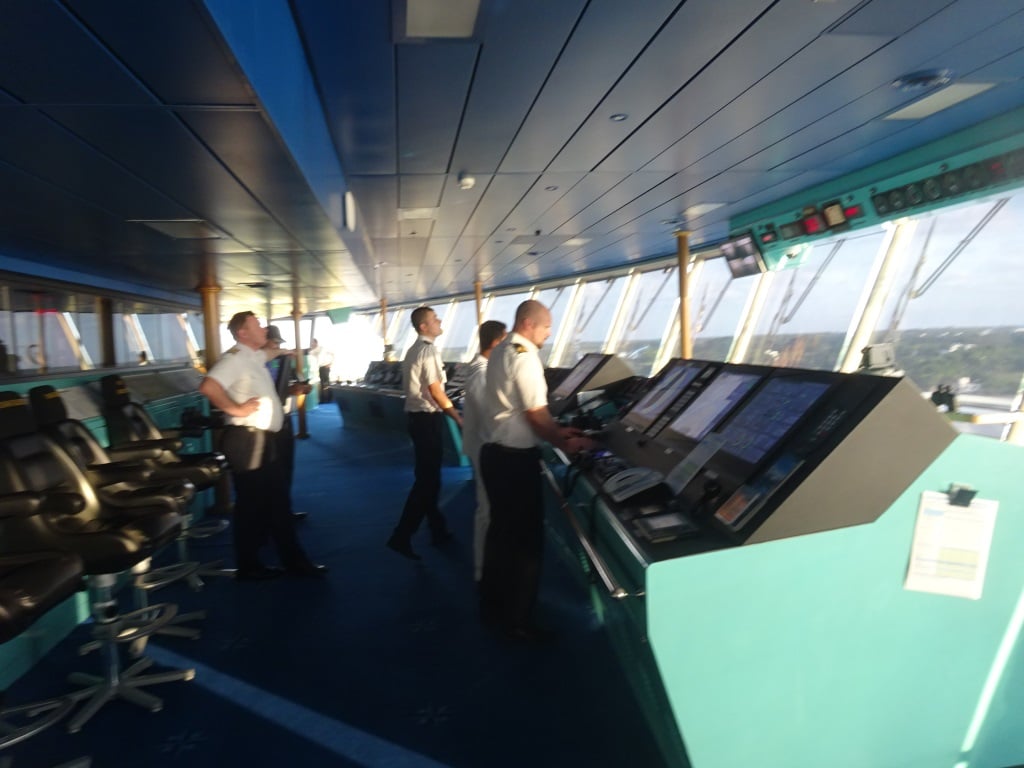 Once the ship is in the middle of the fairway, the whole team moves to the center of the bridge to sail the ship out. 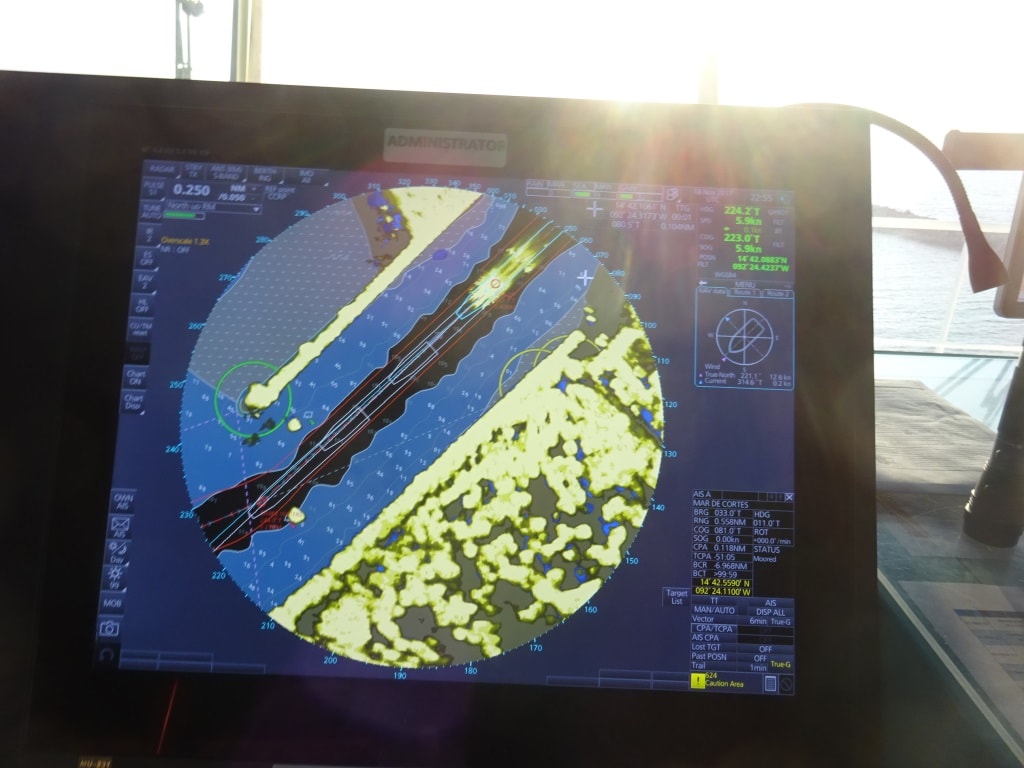 The Radar predicts the movement of the ship 3 minutes ahead based on course and current. As long as we stay in the black we are in good shape. As you can see there is not much room for error as the ship barely fits in the dredged channel.

We sailed outside exactly on the dotted line as planned and once the pilot was off, turned to the North West and headed for our next port of call Huatalco de Santa Cruz. There is a chance of a Tehuantepec wind starting to blow but to me it looks it that that will happen after we are well past the area. So we should have a nearly windless sailing and a great day tomorrow.