Early this morning at 01.50 we crossed the equator and we are now back in the Northern Hemisphere.  The area we are travelling is called the Doldrums, an old sailing term indicating that for most of the time it is a wind still area and sailing ships could drift becalmed here for weeks. “Most of the time” as it is not the case for us. Since we left Nuku Hiva we have had North Easterly winds between wind force four and six and with it, 8 to 10 feet of seas.  That gives the ship a comfortable ride, but not the very smooth ride one might expect from this area, if one had to believe the old sailing ship lore. Things are positively nasty up and around Hawaii, with strong winds and high seas, but at this moment the weather forecast does not indicate that it will come this far south. We will sail under the edges of the cloud system that goes with it, but the weather guru’s are not foreseeing anything worse for this area at the moment. 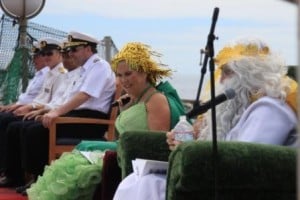 King Neptune and Mermaid Queen and the ships staff.

Today we had a visit from King Neptune. He should have come on board during our first crossing of the equator while going south to Bora Bora but he could not make it. There is only one King Neptune and there are many cruise ships nowadays. Thus his visit came on the rebound.  We could not have had better weather, with partly overcast skies that kept, the sun from beating down on the deck.

His Majesty arrived with his entourage at 10 am. And for the next 30 minutes the crew who had never been across the equator were brought before King Neptune and after being properly sentenced, sent to the barbers for a cut-and-shave. Then as tradition demands, the Captain and the ships staff decided on their fate, dump in the pool or not. 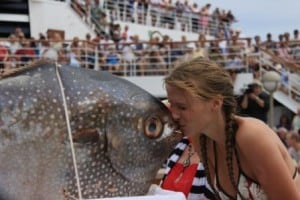 After seeing King Neptune, the first thing to do is”Kiss the fish”. And yes, it is a real one.

To be dumped in the pool, might look like the worst option but it is not. It is much worse to be covered in gook after a visit to the barber and then to sit on the edge of the pool, slowly drying out and getting itchy all over.  For the cut and shave we use colored food dye from the kitchen.

This makes it possible to empty the pool at sea without compromising the environment when we clean up afterwards.  By using various colors it makes it look impressive and gives a better view for the camera’s. 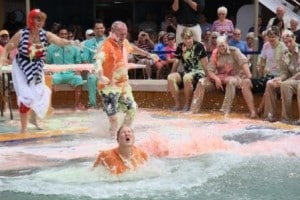 The Event Staff  being dumped in the pool.

When the ceremony is over, it is always a hurried exit for the ships staff as it would not be the first time that Hotel Director and or Chief Engineer ended up in the pool as well, caught by some disgruntled pollywogs. Nothing very much against that, but normally it means that the pagers/beepers go into the drink as well and then new ones need to be bought; at $ 450,– a piece, maybe good for the fun but not good for the budget.

The ship is now sailing in what is really the middle of nowhere. We are about as far from anywhere as possible. 1500 miles from the Society Islands, 1500 miles from the Hawaiian islands, 2400 miles from the Galapagos islands and about 1600 miles from the nearest mainland.  The nearest ship that I am aware off is the Zaandam who is on the San Diego to Hawaii run, and she has been enjoying a very windy cruise. They had the bad weather against them, when they went there, and looking at the weather map, they also have some very bumpy weather with them coming back to San Diego. They are scheduled to be in port the day after us and then turn around for the next cruise, which on the first day might be very bumpy again.  The Statendam will go south and run away from all this North Pacific mayhem and should sail in very tranquil waters near Mexico. As long as the weather guru’s have it right, which I start to doubt a little bit by now. 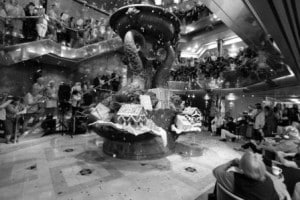 The lighting of the Christmas tree in the atrium. (Photo courtesy, various officers, including the ships Purser Donny)

Today we also started the run up to Christmas, with the lighting of the Christmas tree and some Christmas caroling with the guests. The whole ship is being decorated and the ginger bread houses that you showed a few days ago, have been put in position. I will post a few photos tomorrow.

Tomorrow will be our 3rd sea day and the weather should continue as it is, breezy with a 10 feet swell running from the North East, making the ship gently move.