The weather remained unchanged and was in synch with the weather forecast for a change. Wind from the north East and that made it a bit breezy on the outside decks as the ship was going against it with about the same speed as the wind velocity. The seas were normal for this area with a combined wave and swell height of 12 feet, which made the ship dip up & down a little bit but no pitching or slamming and thus it was hardly noticed. We are under the influence of the South Equatorial current which moves from the Westside of south America to the East side of Asia with a velocity of 0.5 to 1.5 knots and that is holding us back. Today we had the full brunt of 1.5 knots to enjoy and thus the ships engines had to run full out to deal with it.  Tomorrow we will slowly come under the influence of the Equatorial Counter Current which runs to the East and in between the North and South Equatorial current.  I hope that this counter current will be as strong as the South Equatorial current so that mother nature will pay back a bit of the fuel bill that I am currently running up. 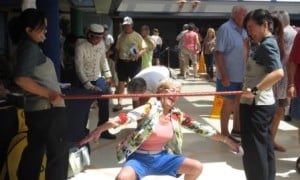 Today we held the Statendam Village Fair, an invention of the then time cruise director on the Prinsendam Thom Faulkner. When I transferred to this ship I kept it in the back of my mind in case the Statendam was going to do a long cruise and thus we scheduled it in for this one. Its success depends highly on the participation of the crew on the ship.

If you have the right stands/booths in place, then guests will eagerly join in. They had received 10 Appie Bucks in the cabin the night before, legal tender during the fair, and the rest was up to us.  The whole area around the Lido pool was turned into a Village Fete with Booths of the various departments and for 1.5 hours everybody returned to the days of their youth and fun was had by all. 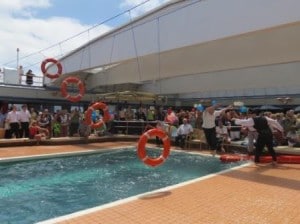 The 2nd officer walking the plank, after a guest managed to throw a heaving line through life buoy number 3.

The pool was taken over by the Deck department, who as pirates had their fellow officers walk the plank if a guest managed to throw a heaving line through a life ring.

The most difficult ring merited the most senior officer. In the end the 4th officer, 3rd officer, 2nd officer, sec. officer, staff captain and finally the Cruise Director had to take the plunge. 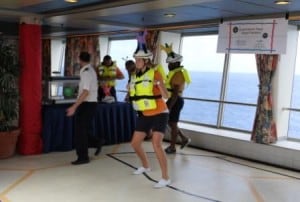 Target practise with the Event staff. A ball had to hit the deck first and then on rebounce try to hit a moving event staff. With a lifejacket as protective padding against hard hitting balls.

Other stands had: ring toss around bottles (Bars), hitting food cans(kitchen), Limbo stick (HK) Guess the collective age of all spouses on board (Lesley with the other spouses), airplane throwing with brochures (Cruise consultants/ Shorex), guess the number of pearls in the bottle(Shops on board), precision dice throwing (Casino), turn on the light (Engine room), hammer the nail (Dining room), Target practice (Cruise staff), photo darts/harpoon the staff officers (Photographers), and test your medical knowledge (Medical Dep). 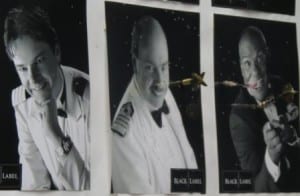 Somebody hit the bulls eye. (All photos courtesy of Henry HRM clerk)

Some guests ran out of money very quickly but the prize winners did quite well; the top scorer having accumulated 215 Appie Bucks after having started with 10. Long lines at every booth and I got the impression that the crew enjoyed it as much as the guests did. Long after the ships whistle blew to indicate the end of the fair, the ship was buzzing with laughter and good memories.  The first prize was the display chart in the Lido on which I plot everyday our progress through the cruise and it also displays a print out of my daily blog. Then there were cookbooks, bathrobes, Pinnacle dinner with wine and DVD’s to be won.

The afternoon was taken over by the Deck dept. again. They inflated the training raft (after it malfunctioned last time) and then held a virtual bridge tour in the Showroom at Sea with the Staff Captain, being the senior navigator on board, taking questions from guests.

Tomorrow will be our 2nd full day at sea. The weather should remain the same, Partly Cloudy with a fresh breeze from the East and slight seas.