We have now lost the South Equatorial Current that was pushing against us and we are coming under the influence of the Equatorial Counter current, which is pushing us the other way. The ship is now making the same full speed through the water as over the ground, and we even get half a knot extra from the current. That will remain so until this evening, when we come slowly under the North Equatorial current. This one is more sideways and should not hold us back as much as the South version did. An unpleasant issue is that the weather is not according to what was forecast. The bad weather North of Hawaii is pushing further south and that brings overcast skies with occasional showers to us and increased swells. Not much of an increase, but each foot above 10 foot of wave height results in an increase in ships movement. In other words, with 12 feet of swell, the ship goes more up and down than with 11 feet. That will stay with us until tomorrow, when it is supposed to reduce to about 7 feet. (….according to the weather forecast) 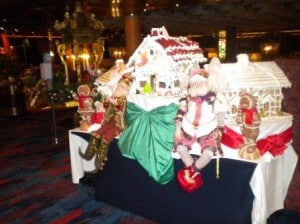 Most guests have developed good sea legs in the past three weeks and as a result all activities on board were well attended. Last night we had two Mariner Parties, held in the show lounge. We needed to use the main lounge as we have so many Mariners on board who were either holders of medals or received a medal. Today we held the first of three Mariners Luncheons, which incorporates all these medal holders as well. So we have three lunches as after such a long cruise as 99% are Mariners. I think there are only a very few who are on their first HAL cruise ever.

For the rest it was very much Lecture day. From morning until the evening, there was somewhere something going on that was informative or amusing or both. We have the regulars such as the Techspert with his computer classes, the Party Planner with her Cooking activities in the Wajang Theatre and then there is the Exploration Speaker series going on, with lectures about Languages and Astronomy, travel to faraway places, and Ocean Liners. For the latter, yours truly stepped in. Normally on a 14 day cruise I do the History of Holland America Line, as that is all the time I can afford. On a longer cruise with so many sea days it is a different story. One side effect of the HAL lecture is questions if I cannot put the HAL history in a more International context. That is what I did today. No Holland America Line ships, but the Golden Age of the Ocean Liners between 1900 and 1940. Famous ships such as the Normandie and the Queen Mary who for battled for the Blue Riband of the Atlantic. Then luxury ships per-say, the Titanic, Olympic, the Imperator and Vaterland who vied for the money of the rich traveler with unabashed luxury. A good hour of information and hopefully entertainment with photos of those old ships both from the outside as well from the inside. Two days from now, on the 19th. I will do the HAL lecture. 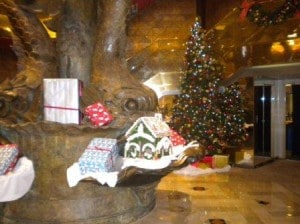 Our first attempt to change the Atrium fountain into a christmas tree as well.

Yesterday we put up our Christmas decorations. We had them already on board since 23 November but we decided that while visiting the South Sea Islands a Christmas atmosphere did not go together very well. Thus we waited until yesterday when we were north of the equator again. The only things we are now waiting for are the Pointsettia’s which will come on board in San Diego. I will not be there, as I am going home at the end of this cruise, but I have asked the Hotel Director to fill up the top level of our Atrium fountain, so you can see a sea of red flowers from above.

Tomorrow will be our 4th day at sea, still sailing in tropical waters and by that time about 400 miles North of the Equator. It will be interesting to see if the weather does what the weather guru’s are predicting.