Today we had a sunny day and everybody at the yard perked up. Our Italian friends are normally already quite noisy but the ships corridors noise level has now returned to normal levels. If there are two Italians arguing about why something is not the way it should be, then it is not advisable to stand very close. Plus we never know when it is an argument or when it is a friendly discussion. And today a lot of discussions were going on as more final inspections were taking place and more was handed over to the owner. Guest cabins but also the Ships Hospital was under scrutiny. Our Sr. Doctor has arrived together with one nurse and they want to get going but nothing can be started up until it all has been handed over. Most medical supplies are already waiting in the warehouse and the earlier they can start the better it is because it is a lot of equipment and each item has to be checked; because with humans involved we cannot just pull a spare part out of the box and assume it will work.

All the Deck and Engine Officers together in the HAL yard office at o8.00 hrs, getting ready for the next day.

For all those final inspections, the company has a whole army of officers on standby. Each morning they receive the schedule for the day and around 09.00 they all march off to their own area of expertise. Nowadays technology is so complicated that each item needs a person who is fully submerged in the topic. The Staff Officers keep the oversight but they can only act if they get the detailed information from the officer in charge. For items such as AC Stations (located over all the decks), Lifeboats (climbing in and out of 22 of them), or looking at over 400 Fire Screen Doors it includes a lot of walking and thus there are no officers in the yard who have not lost a few pounds here and there.

These are the signs we will (hope to) see more and more of every day,

Today I came across the first two modifications compared to the Koningsdam. The Koningsdam has a green bunny as the center piece of the Cabana area on deck 12 behind the Crows nest. That bunny is so out of place there, that everybody loves it because it is so unusual. But apart from generating a smile, it does not do very much. Here on the Nieuw Statendam it has been replaced by a Jacuzzi with a halo above it which acts as an umbrella for shade. The setup is somewhat similar to the Cabana area on the new Seabourn ships. Also there the focus point of the deck is the Jacuzzi. I loved the bunny but this is a very good idea to give the Cabana people an extra perk. 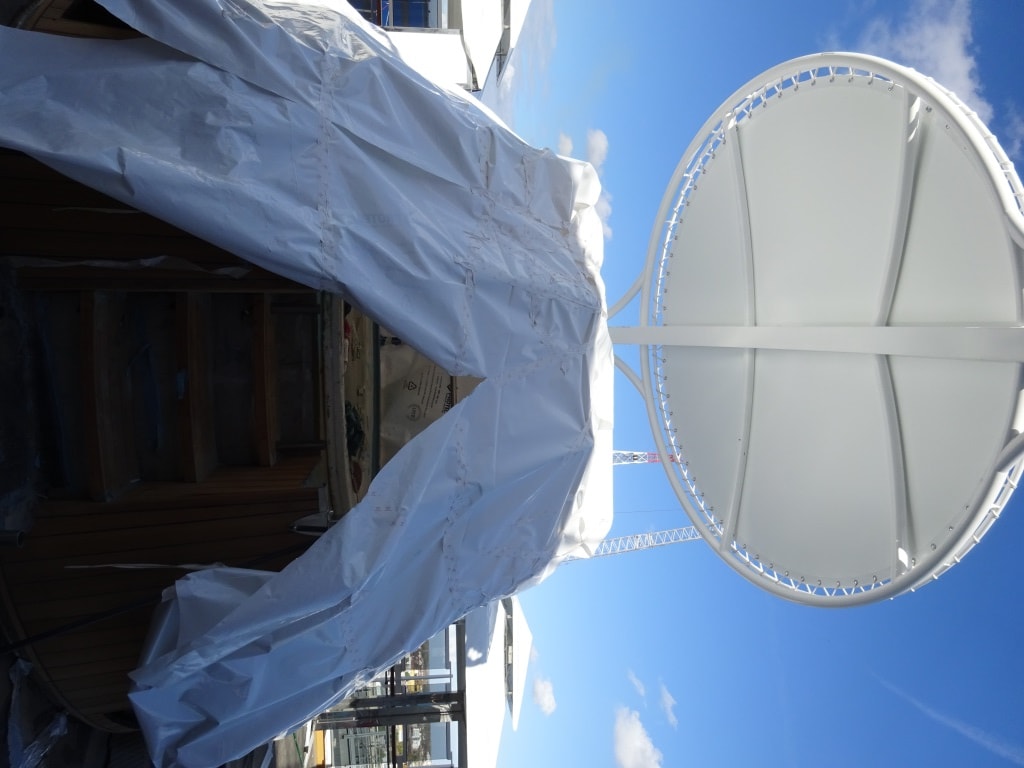 The new Jacuzzi on Cabana Deck with the Halo / round thing above it is to provide shade.

The 2nd change observed is in the Tamarind restaurant. On the Koningsdam there is a small Sushi bar in the ps. aft corner and because sushi is becoming so popular on the ships this bar has now been doubled in size for the Nieuw Statendam. There is also a seating area next to it with little booths for those who do not like sitting at the Bar. The rest of the Tamarind restaurant has remained the same and will no doubt prove to be as popular as ever. 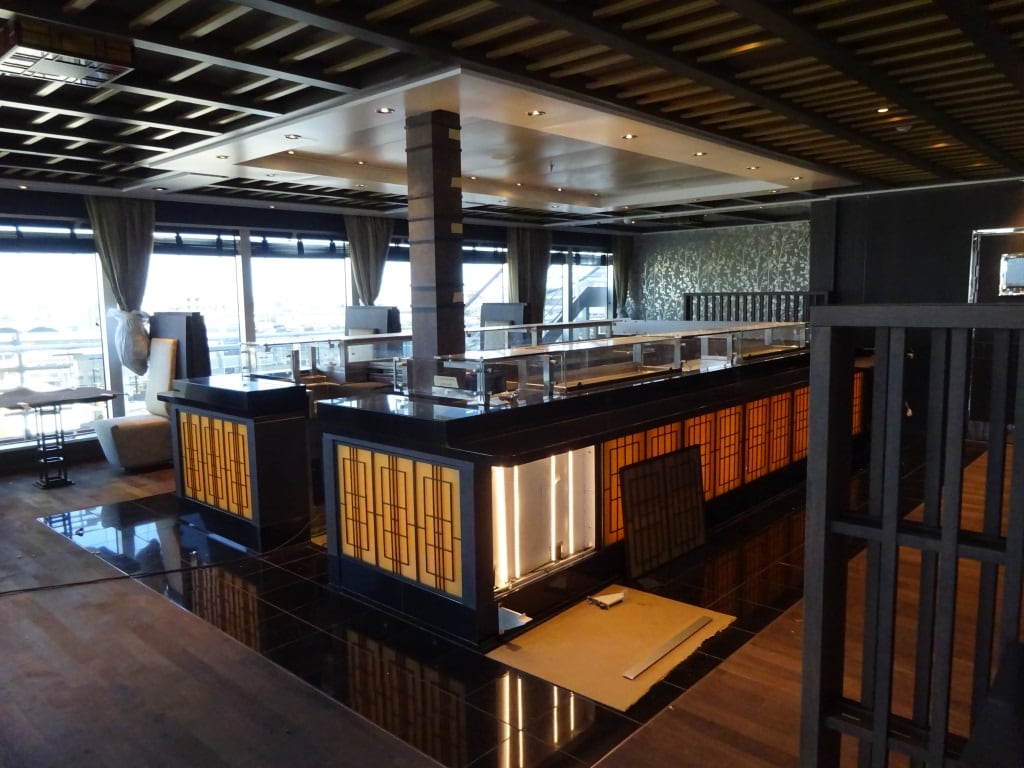 The new Sushi Bar in the Tamarind restaurant. Guests can now sit in a square instead of in a straight line.

In the meantime you have to be careful walking around the ship as everywhere there is painting is going on. In some places it is just a touch up for where the paint got damaged but in the Fan rooms and on the outside decks, the final coating of white is applied. And the applying of the paint is not done in a “touchy – feely” way. The painters are completely suited up and their vision from behind their air (read fumes) tight goggles is not that great. So while they move their nozzles around in large arcs to get an even covering they cannot see if somebody is coming around the corner or is sticking their head inside. Of course there are warnings signs but they are in Italian but not every contractor in the yard speaks and/or reads Italian. Thus quite a few of them who did not have a white coverall before, now have one. 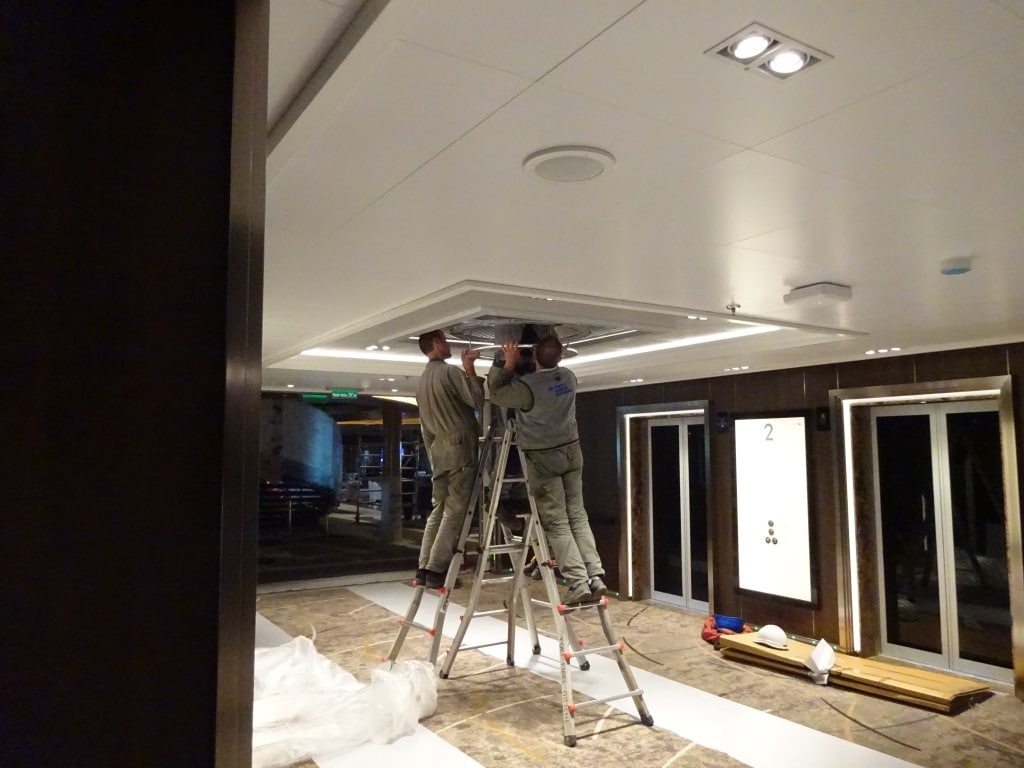 Not everything is finished yet. The more elaborate show items such as the big ceiling lamps in the staircases are only now being put in position. And if you ever wondered how many Italians it takes to get a light bulb in, the answer is:  three.

For the outside decks our ships Bo ‘sun is one step behind them as with the first layer of white paint applied, he can see if the steel surface is smooth enough to make the ship shine when the 2nd layer of white paint goes on. If not, then a remark goes to the shipyard and the surface first has to be sanded down to create a smoother surface and after re-applying a primer, a second try with white paint is attempted. Our Bo ‘sun is Indonesian but he has picked up a large number of Italian Phrases, nice and not so nice, to get his point across. It will be quite some time before he will be completely happy but he wants his ship to look nice and so it shall.

Tomorrow the routines noted above will continue as we have less than a month to go before delivery. Also tomorrow we will have more rain which is not a problem for us here in Marghera but it could be a problem in Venice. The weather forecast is quite pessimistic:

More unsettled weather is on the way for Venice and surrounding parts of Italy as a storm arrives from Thursday into Friday.

A brief period of southeasterly winds could result in renewed flooding problems Thursday into Thursday evening corresponding with high tides.

Rainfall of 13-38 mm (0.5-1.5 inches) will accompany the gusty winds and further elevate the risk for flooding.

So we can only hope for the best.