I mentioned the bad weather yesterday and it was even worse than expected. Water level reached the 4th. highest level ever seen in Venice (according to experts in the shipyard) and it resulted in a lot of damage and some very wet tourists. As in this case the water did not only come from above but also from below. The water came more than 1 foot over San Marco Square and that is not very nice.  In Marghera at the ship yard we did not have any problems. The land is higher here as Marghera and Mestre are located deeper into the Laguna and the dock at which the ship moors, which is also the surface level of the shipyard, is quite high. Yesterday afternoon we had the wind push the waves into the yard area but we still had several feet of height to spare. The ship will not even move in hurricane winds as the way she is moored is much more secure than normal. Courtesy of the fact that there is no crew, no engine power and nobody available to do anything. Even the tugboats have to come from far away. So the yard is not just using a regular mooring ropes configuration (which will stay once the ship has been handed over to us) but also heavy steel hawsers on which drums and mooring tackles can keep the wires tight at all times. 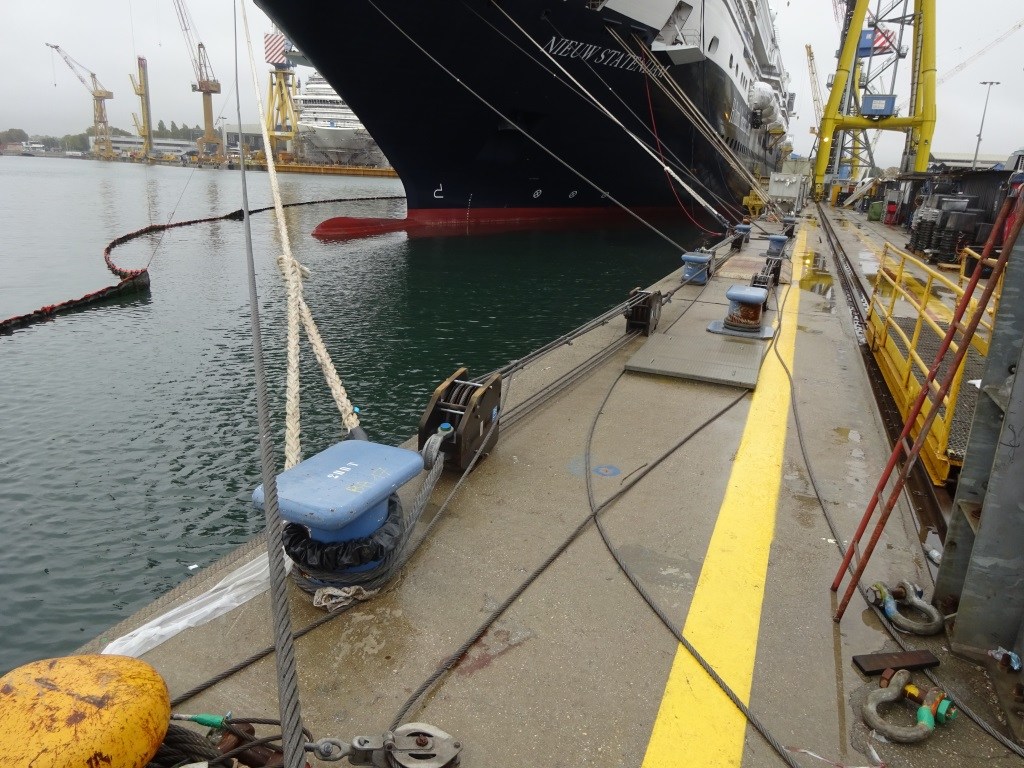 Safely docked against the weather. The white mooring ropes are the normal way the ship is kept alongside. All the steel wires are extra and there are at least six of them, on top of the 8 regular ropes.

Now the weekend is really over and the day of meetings (Monday) is out of the way, the tests and inspections for delivery continue. So the deck and engine officers are running all day long between ship and office to record their findings after another test of delivery has taken place. If something does not work, or what mostly happens…… not work as expected, then a quick report is written. The shipyard then follows up and a few days later there is another inspection. There is not much that goes wrong but with a big ship, a few items compared to the size is still a lot and it keeps everybody on their toes. (Anybody volunteering for testing 3000+ telephones ??) We have 400 fire screen doors on board and those are “always in the way” of those working in the area, so when one has been tested and found ok by the installer, it does not mean that it still closes perfectly when the official inspection happens a few days later. If it is just a small adjustment, then it can wait until all the yard workers are gone, if it is more major then it will be fixed now while there is still time. 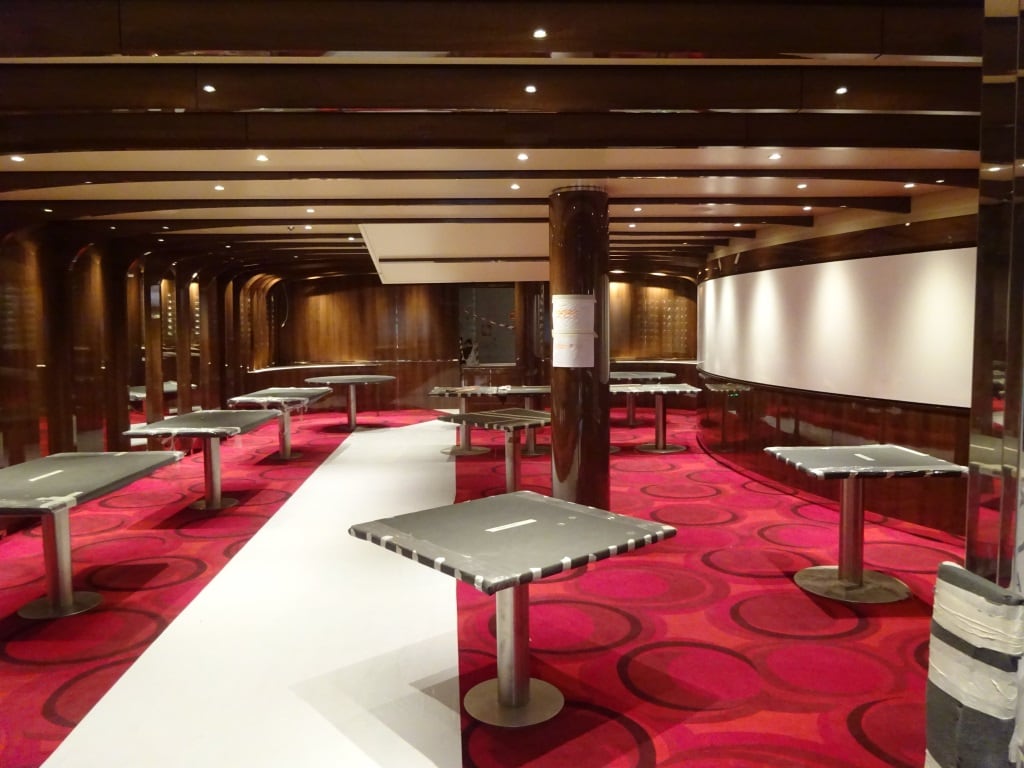 The Sel de Mer Restaurant. All finished. Now waiting for the decoration (See the white wall) and the chairs, table linen and cutlery which are all owner supplied.

Hotel is active on another level as they have to get ready to load the ship with all that we need, I explained the process yesterday. Also they face the challenge of getting all the 900 crew on board and processed. We have currently about 150 crew already on site (bused every day to and from the hotels) but they all have to be changed from a “yard worker” into a crew member. Thus tomorrow we start with handing out crew ID cards and that means standing in line to have our mugshot taken. After the 10th. we are expecting about 150 crew joining each day, who will all need to be processed and then given, helmets, safety shoes and coveralls as long as yard work is going on. 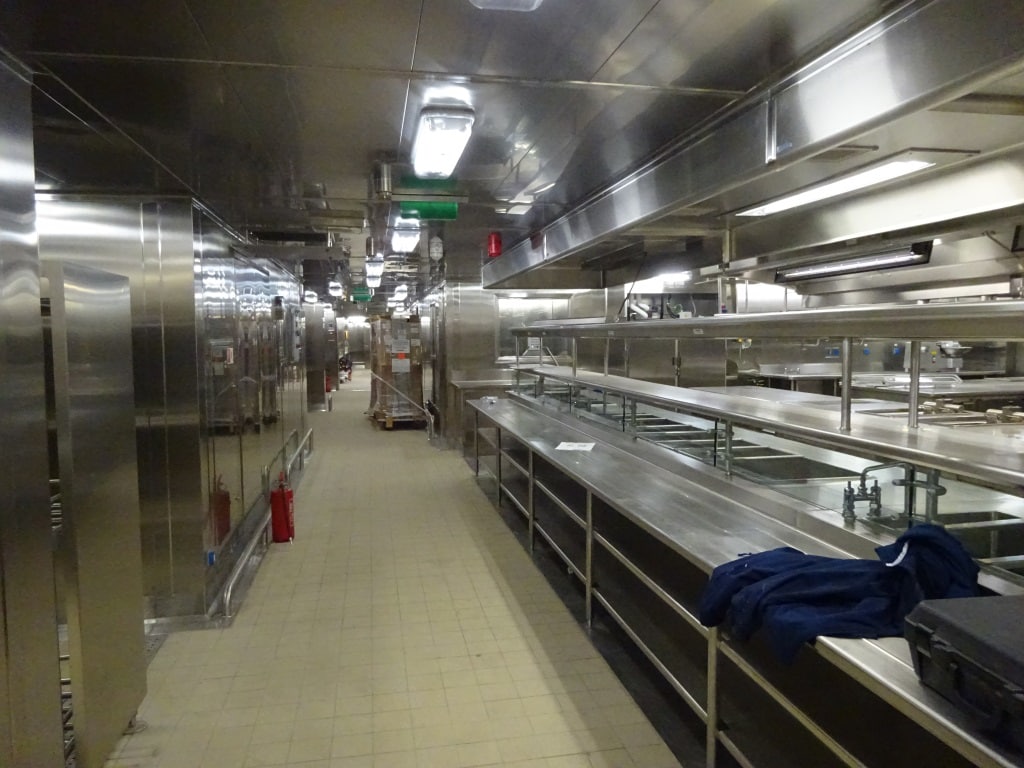 Same for the main Galley. Most of the work has been done and the yard has now started installing the Owner supplied Ovens and other operational equipment. See  what is standing on the pallet, still ina  carton. It is a sort of oven for keeping food warm while waiting to be served.

Also the Fleet trainers arrived and they will be busy with training each crew member in his/her safety function. About 400 crew have sailed on the Koningsdam so they are familiar with the size and layout of the ship but as a vacation time tends to wipe everybody’s (safety) memory clean, we will start all over again. Plus we are facing at the moment a relentless flow of new regulations coming in as the nautical world keeps changing faster and faster. Auditors are now running the world and if something has happened anywhere, we can rest assured that in the near future an auditor will investigate if our procedures are so watertight that whatever happened, cannot happen with us. 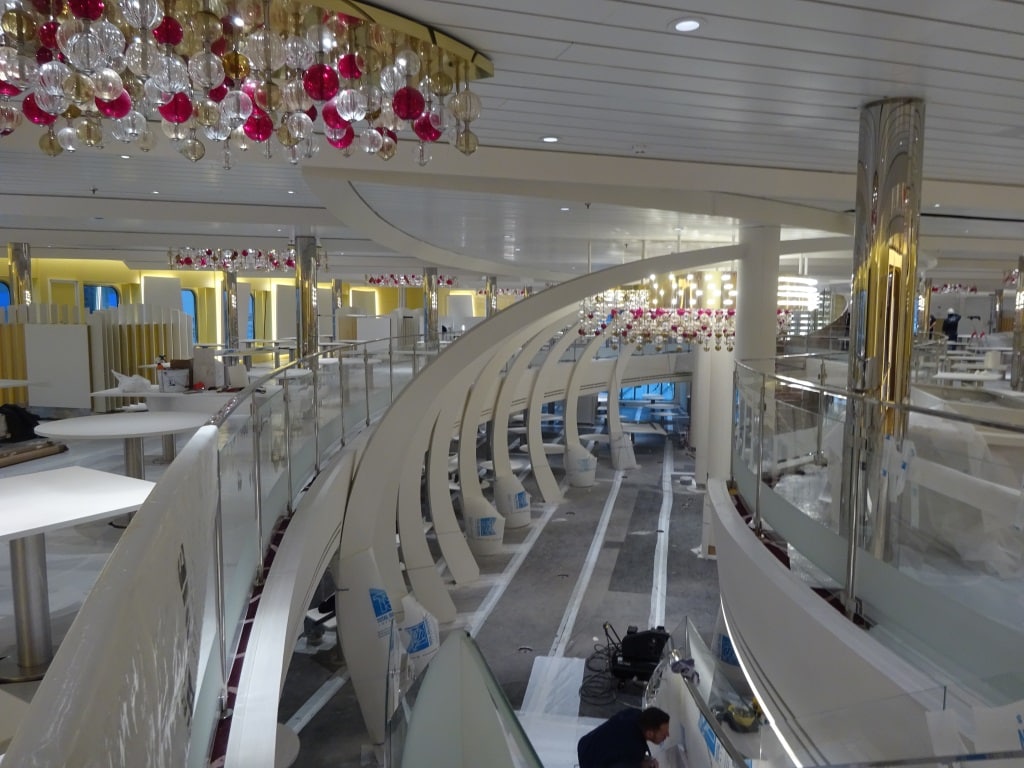 The Main Dining room. The carpet is covered with wood as painting is still in full swing, but for the rest, already for the Dining room Manager to move in.

I have started in the same way as I did with the Koningsdam, reviewing the security implementation. While the Security Officer is busy with his CCTV and ensuring that the yard workers and the crew will follow the rules once the ship is ours, I am looking at the flow of activities for when, if all the crew are called to stations to help out with any security scare we might have.

The weather improved today and will continue to do so tomorrow. So we will be fine, but the Venetians will be busy pumping out cellars and removing the debris brought in by the floods. I hope it will work out for them as on Thursday, more rain is expected, although not all day long.