Here I am at the shipyard and ready to help out with finishing the ship. I have been parked in a hotel just outside the town of Mestre and everyday there is a whole Armada of Buses and cars moving towards the ship in the morning and back again in the late afternoon. Mestre is the district town in this area, with Venice to the North and Marghera (where the ship yard is located to the South East) 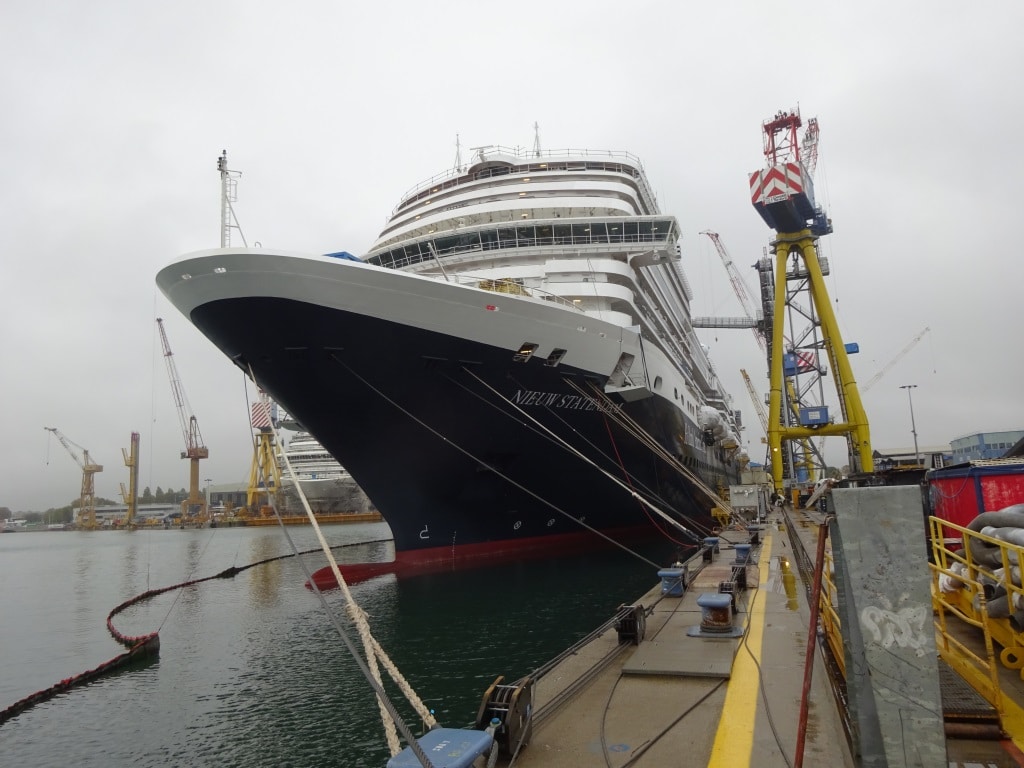 Here she is. Almost ready to set sail across the Oceans. Tucked away behind her is the Carnival Panorama which is still in the building dock as she is still in the steel construction stage.

The group of officers who oversaw the construction from the beginning live in apartments in this area and the second wave including Yours Truly, stay in various hotels in the area. The rest of the crew will arrive after 10 November and they will go directly on board. It would be nearly impossible to accommodate all this crew in hotels as most of the hotels here also do a roaring trade with sightseer’s going to Venice. A golden tip for those who want to see Venice and not pay the heavy prices of the Hotels in Venice itself; book a hotel in downtown Mestre opposite the Station and take the bus or train into Venice. The train takes less than 10 minutes and they run at least every 30 minutes. 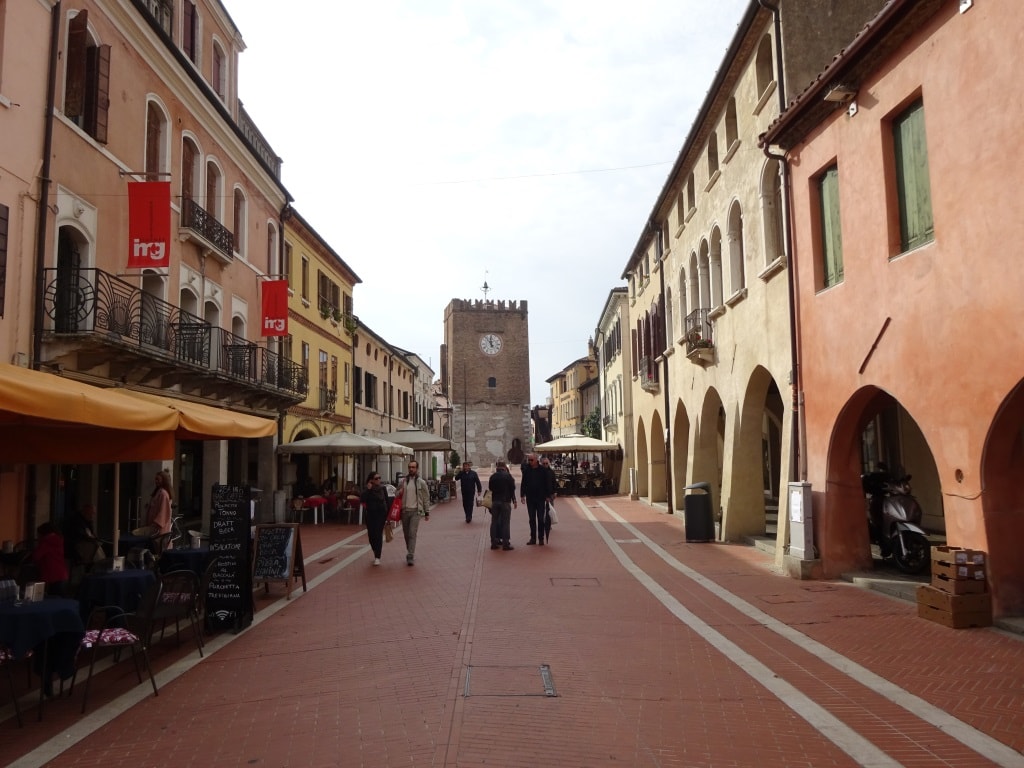 This is Mestre on a Sunday morning. Not much happening as they were all still in church or at the Marathon.

As the shipyard was closed yesterday I took the opportunity to have a good look at Mestre. I have been to Venice many a time and if heading that way, I would be very tempted to go to a very good 2nd hand bookshop there and make a major investment in the local economy. The problem is I am not going home anymore until 19 December so I would have to fly all my purchases back from Fort Lauderdale. Thus I went to Mestre. Nice little district town with some old houses and a tower in the middle and a beautiful market on Saturday morning. On Sunday they had a marathon going from Mestre to Venice (They can run along the train and car track to Plaza Roma where all traffic halts). Our chief engineer participated in the half marathon, he did not win, but he made it home again.

For those who followed the Koningsdam getting ready in March 2016 (or want to re-read it in the archives) you will recall that that ship was way behind schedule. Not caused by Holland America but by organizational issues from the ship yard. Only when they moved one new building to another yard they were able to free up sufficient labor to get rolling. Still Holland America had to postpone delivery by three weeks and even then it was all hands on deck to make it a success. But Holland America people do like a challenge and so we did make it a success.

With the Nieuw Statendam it should be less of a rush as the ship is nicely on schedule. Work inside is consists of mainly finishing off, installing the last pieces and testing to see if everything works. Most public rooms are ready or nearly ready as far as paneling is concerned and the while the Koningsdam was still a horror show of wires, cables and ventilation pipes everywhere, all has been nearly removed on this ship. 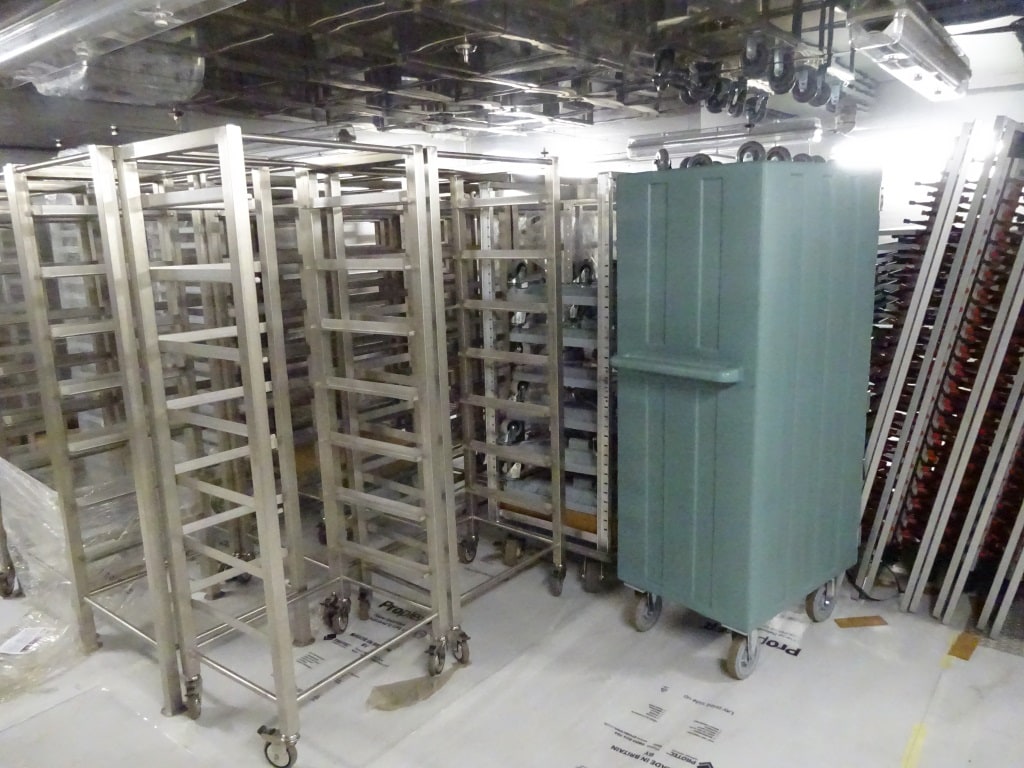 This does not belong in a store room but is used in the galleys and the pantry’s.

Because of the advanced state of progress, the crew who have arrived are nearly all drawn in with getting the owner-supplied-contents on board. There is a system for that; all is received in the warehouse and signed off. Then it is brought on board and temporarily stored in the ships store and provision rooms. The Cold rooms are not cold yet, so every room can be used. From there it is separated and item by item is stored in Guest rooms. (Quite a few of them have been delivered already and are complete except chairs and bedding) As soon as the public and work areas are handed over, the materials for that specific area comes directly from the one specific cabin and can at once be stored where it belongs without having to be sorted again. A very good working system as it ensures that the Ware houses ashore have enough room to keep receiving more goods for the ship and it gives the crew enough time to separate everything on a timely basis. 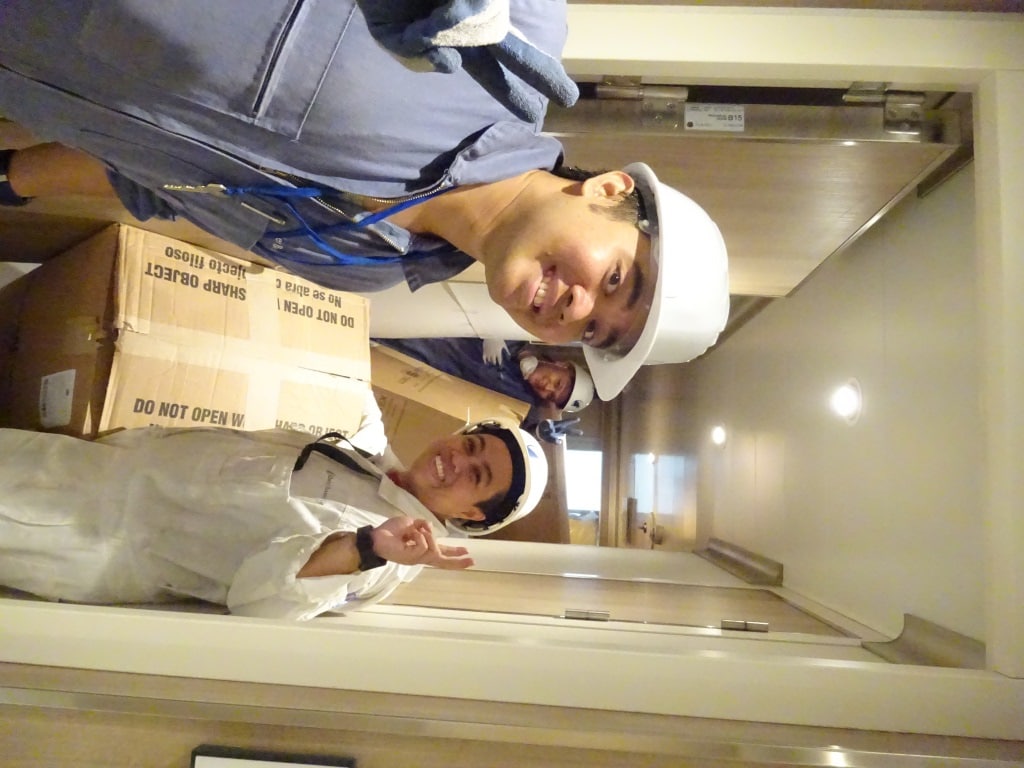 One of the guest cabins being stuffed with parts for in the ship. We have cabins full of chairs, crockery, cutlery, linen etc.etc. All waiting to be re-directed to the correct location.

So things are looking good and the main focus point of everybody in the coming days is to get everything  that it’s  owner supplied installed and squared away; and then focus in the last 14 days is to get the ship cleaned, everybody trained, and completely ready for the shakedown cruise. 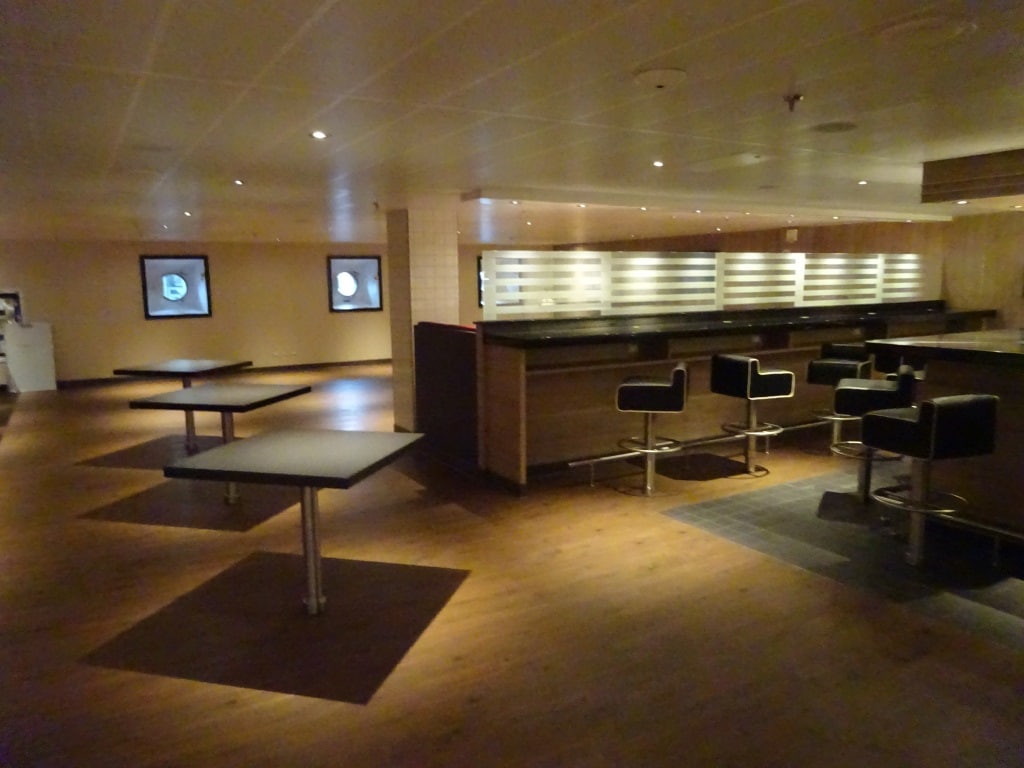 The Petty Officer  Mess ready and completed. Only the chairs have to be delivered.

The only thing that is wrong, badly wrong at the moment, is the weather. Since last night we have torrential rains interspersed by Strong winds due to a weather system lying over the center of Italy. On the west side of the country it is so bad that they closed the port of Civitavecchia today. I think two ships were supposed to come in today for a turn around, so there will be lot of unhappy campers. (Or happy campers as they get a day extra at sea if they not do have to go back to work or fly)