Today we are in Livorno and for me this is a crazy port. It is a large and very modern port but then they have a medieval entrance which requires a 90o degree turn to get into the port. All the ships go via the south break water opening. There are two openings and I assume that in medieval times the idea was to enter via one entrance and to leave via the other. But the north entrance / exit has silted up and is now only useable for small craft.  Dredging does not seem to give a permanent solution as A. it will silt up again very quickly and B. if too much mud is taken away then the breakwater wall seems to collapse. So even the bigger ships, not built for this old 90 degree turn have to be squeezed in and that is not always possible. So port calls at Livorno are cancelled with a greater frequency than would have been the case if they had a more modern port entrance. 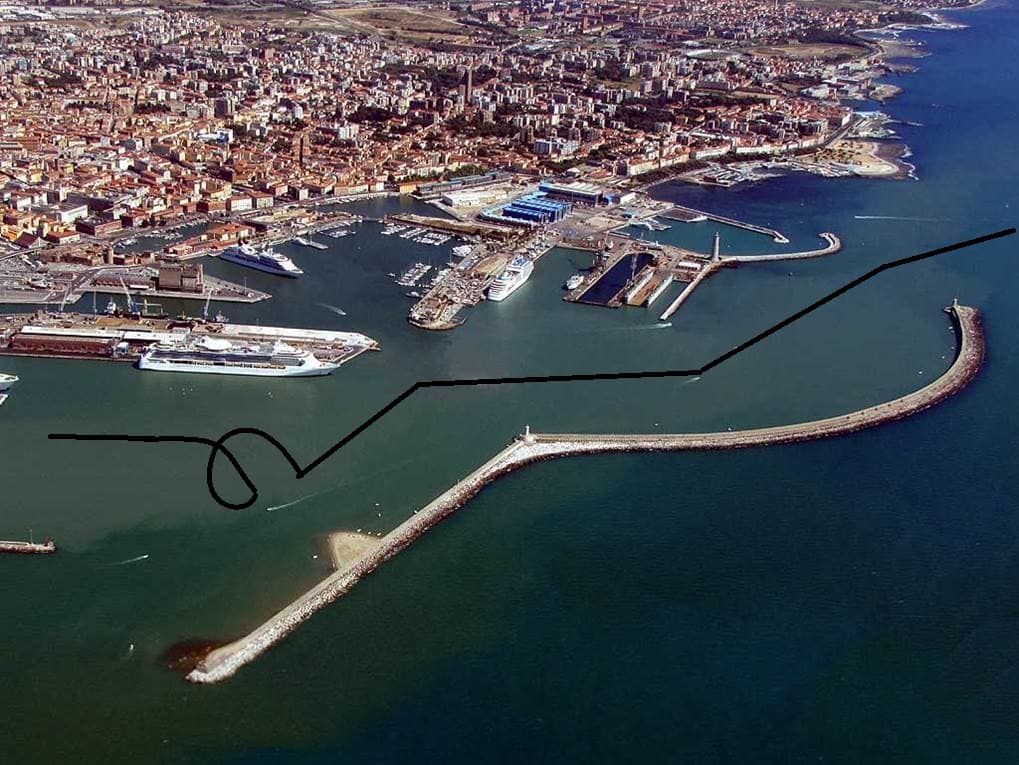 Livorno from the air. The black line shows the maneuver the Captain has to make to get to the dock. Also notice in the photo the sand/ mud banks around the breakwater on the lower left hand side.  On a windy day is happens that a swinging ship comes too far south and puts its nose into the mud. Soft mud, so no bump, no damage and with a kick astern all is well in the world again.

Because of all the squeezing and the swinging in the inner port and the amount of traffic, we docked half an hour later than scheduled. Not that it makes a difference for arrival in Civitavecchia as it is not far away so 30 minutes can easily be absorbed. But it is not ideal for the early morning tours as they will be knocked back as well a little bit. Still the weather was as forecast, over cast but with a nice temperature and hardly any wind, so I think the guests will have enjoyed themselves. Either in Livorno, Pisa, Florence or anywhere else in the interior as the company has a large number of tours going there. This is the area where the Italian Renaissance started and it is visible. When I walk around here I always get the impression that the Romans were not even finished building, before the Renaissance builders knocked them over the head to take their place.  So it is a wonderful area if you are into antiquities and history. 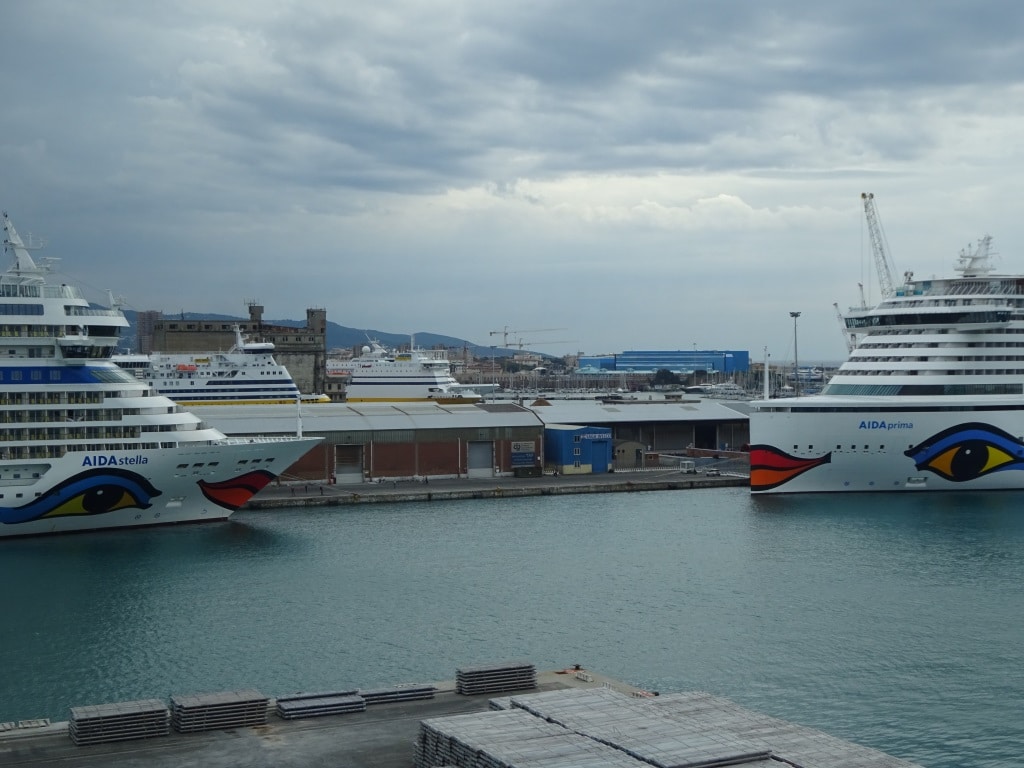 To the left the Aida Stella with the bulbous bow and to the right the Aida Prima with the new X-bow design. In the back the ferries to Sardinia and Corse.

In port with us today, a lot of ferries which sail to the nearby islands and two cruise ships, the Aida Stella and the Aida Prima. They belong to our sister company Aida cruises of Germany in the same way as we have a joint venture with Princess and Seabourn in the HAL Group, Aida is combined with Costa Cruises and they have a combined Operations headquarters in Rostock Germany. Aida’s product is totally different to ours as they cater for Germans  with a very casual style of operating. I would call it Buffet Style as the emphasize is (of course) also on food but a bit more easy going in the set up than with HAL.  What they have as a trade mark, is a full size brewery on board where they make their own German Beer while sailing.  I find that a great omission on the Hal ships…………….Maybe HAL should go that way as well as the Craft Beers that we sell on board (we have at least 12 brands going now) and we see increasing sales year by year and thus there should be a market for it. 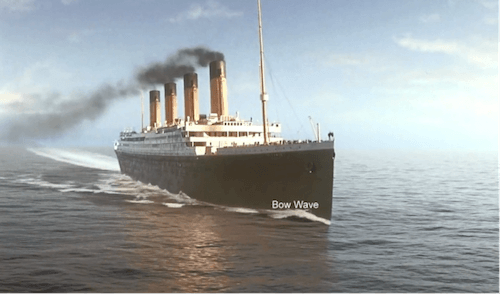 The Ttanic had a straight bow. And the unkown artist made a nice bow wave. You can see the chop along the hull, with a more modern bow that would not be there.

But the reason I mention these two ships is because they were docked nose to nose today and gave a clear indication of the changes in ships –bow – design. Ship architects have been tinkering with bow designs as long as there are engine powered ships. It went from a straight bow (until the 1920’s), to Maier Bow (late 920’s), then to the angled bow (1930 – 1970), then to Bulbous bow (1970 until now). Then the Axe bow was developed for the offshore and now we are entering the era of the X bow a sort of modification of the Axe bow. The later one has now been installed on the Aida Prima. All these efforts are made to reduce the friction of the ship (called drag) through the water and thus reduce the fuel costs. The Koningsdam still has a conventional bulbous bow and so will the Nieuw Statendam. What the third ship of the Pinnacle Class will have is anybody’s guess so we will see. 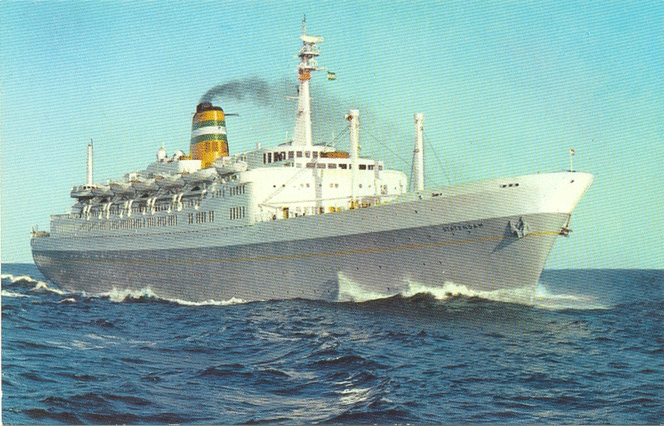 Our beautiful Statendam of 1957 had a rake bow.

This is my last blog for the coming week. I leave the Koningsdam tomorrow in Civitavecchia and then fly home until 26 October. Then I will be on board Nieuw Statendam from that date onwards until December 19. That period will include the finish of the newbuilding, the startup of all facilities, the shakedown cruise and then the maiden voyage. Pending connectivity there will be a blog everyday as usual.