The ship supposedly docked at the pier was not a ship but a number of barges carrying out maintenance to this floating dock. (The Monte Carlo Pier is a floating pier, connected with a hinge system to the shore and with several strong anchors to the seabed) And of course those barges were today not at the pier but doing something important at anchor. But whatever the case might have been, no docking for us. So that gave the captain a headache with the swell. The wind had nicely been abating during the night and now the million dollar question was, has the swell has reduced enough to make tendering possible?

There was a plan B up the sleeve and that was diverting to Villefrance which is behind Monte Carlo in a sheltered bay and protected from the swell from nearly all directions. But that is 10 miles away from Monte Carlo and thus not ideal for the guests. Who then first have to go ashore by Tender and then by shuttle bus to Monte Carlo. But it is an option and still better than cancelling everything.

But the weather Gods were with us today; at day light the swell had subsided enough to be able to create a nice lee on the portside and as we were all alone, nothing stopped the Captain from parking the Koningsdam about 1000 feet away from the entrance and thus reducing the wobbly ride between ship and port entrance as much as possible. You are not allowed to anchor here but nowadays the newer cruise ships mostly drift and use the engines to keep position. 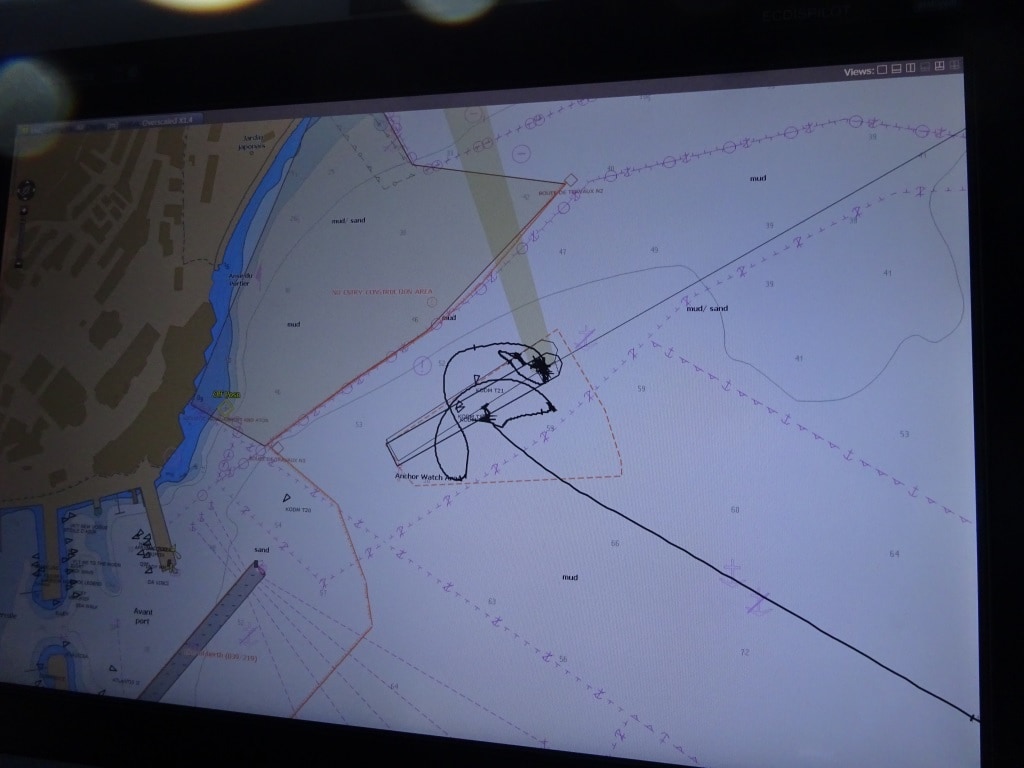 When a ship stays on the engines, it can stay in almost a standstill position. As long as it can handle the wind. But the direction of the swell does not always remain coming from the same angle, so the Navigator is constantly changing the heading of the ship and together with the arrival swing this morning to safely lower the tenders, gives this pattern on the Nautical Chart.

That only thing left is the other problem which Monte Carlo has, local boats. Monte Carlo is full of boys with toys (and no nautical brains), you cannot call them six pack navigators, maybe champagne navigators, who come spouting out around after 10 am on a sunny day. And what do boys with toys do once clear of the breakwater? they go full speed ahead and pull an enormous wake. With utter disregards for any other traffic in the area.  But the weather which is normally our enemy, came to our help: it rained all day. And those boys with toys are normally accompanied by skimpily dressed Ladies (the boys have to impress somebody with their toys) and those ladies are not coming out in rainy weather and thus the boys stay at home as well. Hence a bit of wobble / swell at the platform was the only thing we had to deal with. Compared with the challenges we were expecting, it was not that bad at all.

Another challenge is with tender operation is that everybody wants to get off at the same time. The tours sometimes go right after arrival, especially the full day tours, but those guests on afternoon tours or not on tour at all, take their time. First they go to breakfast and then around 09.00 everybody shows up at the same time. Expecting that flow, the ship had all its six tenders in operation and even a shore tender on standby to get the rush ashore. Two loading platforms at the ship and two docking places ashore; and all was well in the world. Then when guests come back, it depends on the weather whether we have a rush hour or not. If all the tours are coming back at the same time, then there will be a line but the length of the line really depends on the weather. Sunshine and we see a peak right at lunch time and a peak one an hour before departure. If it rains, it is more spread out. It seems that guests get fed up with the rainy weather ashore at different times. 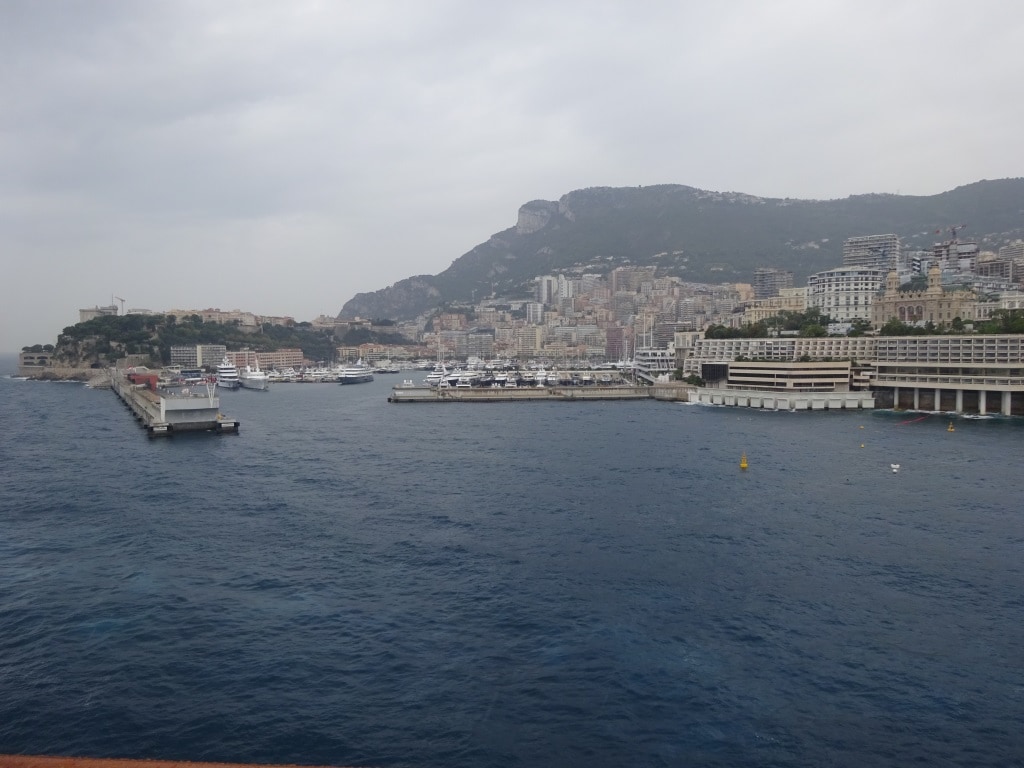 The port of Monte Carlo. From the left to right: The cruise ship under refurbishment. The yacht harbor. The low white yacht is the Tina O. (formerly the Tina Onassis and now available for charter) to the right up the hill the Casino with the brown stone and green domes and under it the Hotel where the GP cars roar under as fast and as loud as they can.

Even for those staying on board, there was something to see with the ship floating right in front of Central Monte Carlo. Apart from French rain, the top of the casino was clearly visible as from the sea side it is not enclosed by apartment buildings. Then there is the Hotel of course, world famous because of the yearly Grand Prix when all the cars roar over the road under that hotel. And they do roar, when cruise ships are there during Grand Prix days, they try to anchor or drift as far away as possible. At our distance today, the noise would still well have been over the 90 decibel. GP drivers seem to have less of a problem with it as they wear helmets but also their engine noise is behind them; while the ships get the rebounce from the tunnel wall which then pushes the sound out over the sea.

Tomorrow we are in Livorno. Hence we are leaving around 10 pm. tonight as even with that time it is only a 10 knot run to the pilot station for early tomorrow morning. The weather is improving. We did lose the wind today, tomorrow we will lose the rain. It will be overcast but that is not too bad for looking at old buildings in Livorno or on tour to Pisa and Florence. The temperature will help as well. 66oF / 19oC, nice weather for a day of walking in narrow streets.