Although the Mediterranean is known for its beautiful weather, it is also a very windy area. In the winter the winds can blow from the north (Generated by the landmass of Western and Eastern Europe) and in the winter from the south (generated by the Sahara). In autumn and Spring with the change of the seasons it can come from anywhere, depending on how the High Pressure Systems are moving and which part of the landmasses gets heated up the most. The Gulf of Lion (the area where Northern Spain curves into Southern France) is an area particularly prone to strong winds and they can come from anywhere, west, north, east or south. When as a captain you arrive with your ship and there is a day with no wind at all, then you really start to worry about why that is and how long it might last.

Today was no exception. During the night we had winds breezing up to 60 knots but luckily coming from the Easterly to South easterly direction. Not nice in particular but a good direction so you can keep up hope that the ship might get into port as it was not a Mistral wind direction. Then you have real issues to get in as the port entrance is perpendicular onto the Mistral Direction and once inside you are either glued to the dock or you blow off the dock. With easterly wind it is a bit better as that wind normally follows the weather forecast and does not play tricks on you. It is fairly reliable with increasing or decreasing and maintaining direction. Still it held all the same back so once approaching the pilot station we had a bit of a traffic jam.

Thus this morning we were quite lucky as the wind calmed down a little bit when the ship came close to the pilot station. Gusting around 20 knots, still not ideal but with the wind on the bow sailing in, you can do it. Swinging around at the berth just takes a bit more time as you have to go deeper and control your maneuver careful as the way the wind is hitting the hull keeps changing while you make the turn. So there is constant adjustment needed to thrusters and Azipods to ensure that the ship drifts as little as possible while making the turn. Although it was windy, the captain decided to swing on arrival as in the course of the day it was expected that the wind would increase again, and indeed by lunch time it was breezing up to 25 knots. 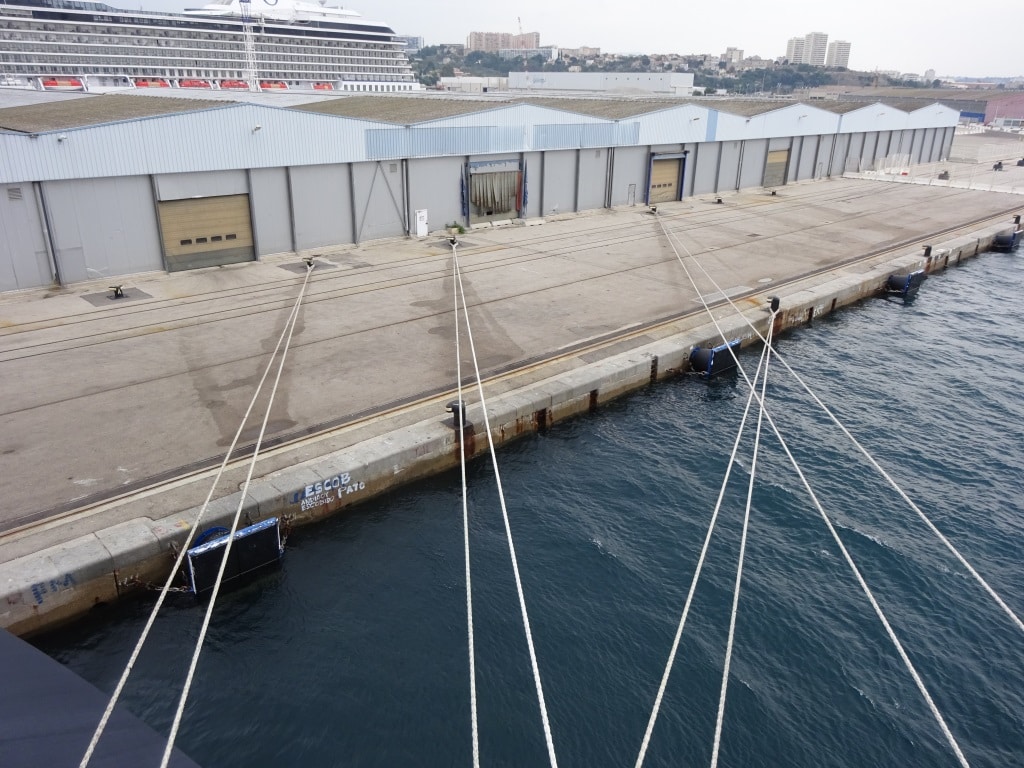 The stern ropes of the Koningsdam. The officer aft put the longest one on the bollard at the edge of the dock. But all the other ropes inland so they would run as horizontally as possible.

The Port of Marseilles has been working very hard with upgrading its cruise port facilities in the last 10 years. It started around 2001 when the old sheds and warehouses disappeared and the first new purpose built cruise dock arrived and in the following years the port area was more and more expanded. Now there are seven berths for cruise ships and today there were three in use. In port the Mein Schiff 5, the Marina and the good ship Koningsdam. For mooring the ships, especially those at the south side of the piers (e.g. where the Mistral pushes the ship off the dock) the bollards are placed more inland so the ship can give out long, almost horizontal, lines and so provide a good holding power. If lines are under an angle down to the dock, then they lose about 30% of their strength already as they are pressing down with an angle on rim of the gap in the hull (which is called a Panama Chock or a roller chock) when leading down to the bollard below. A windy port such as Oranjestad Aruba, where the ships have to push against the Trade Wind, has the same arrangement. The head, stern and breast lines lead straight from the ship to a bollard standing further inland, providing maximum holding power.

Although the Deck department will sing the praises about the port, for the Guests and Crew it is less good. Nice Terminal but very far away from downtown. Hence there are shuttle buses and taxi’s needed to get you to where you want to go. I do not find Marseilles really a port to walk around in (Although they have a small maritime museum at the Chambre de Commerce with very nice models) but the city tour is interesting so I always recommend this port for Tours. Here we have tours going to Avignon (once a papal city), to the Vineyards (Chateau Neuf du Pape) and tours to many of the medieval cities in the hinterland where time literally has stood still. (Hence the many Ruins). Then at certain times of the year lavender fields are in blossom and that is a sight not to be missed. This is between June and August and then tourism increases 3 to 5 fold. Somebody told me that in one year they had a traffic jam of over 200 buses with tourists in the Provence all on one road a sort of record for the area. Luckily they had something nice to look at. I wonder if the ships would have sailed on time that day. 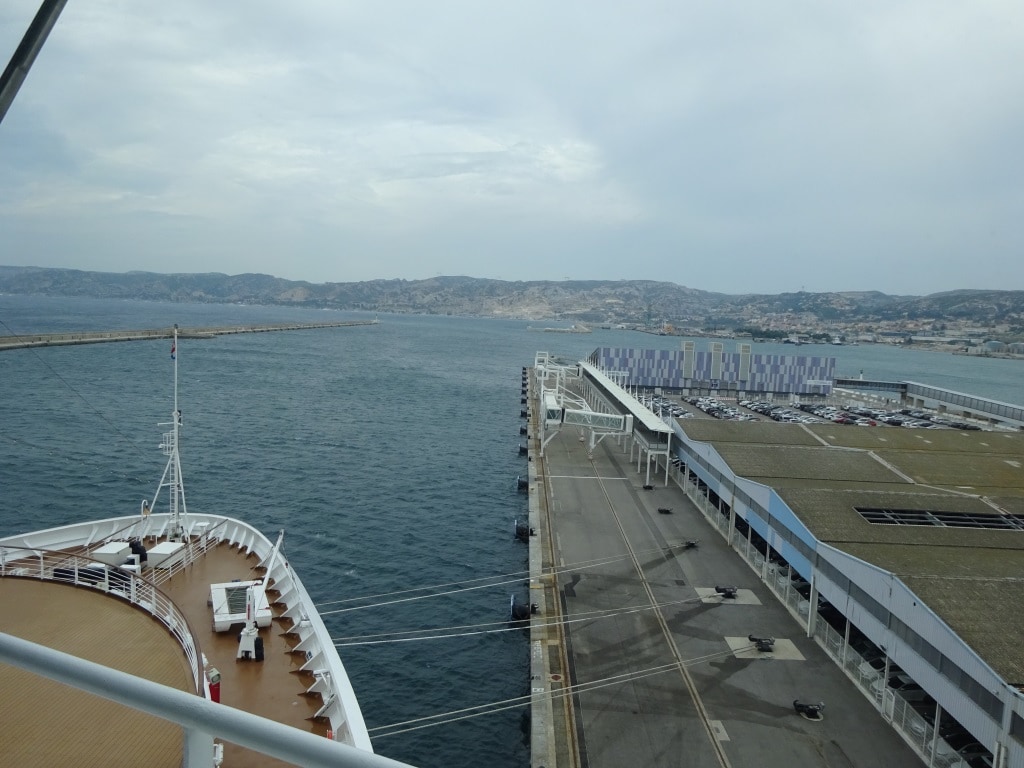 This is not a very exciting picture for a cruise guest but the exit of the port is straight in line with the berth. Which means the captain can just give full ahead and make speed and race out of the port. Note: also on the bow the head and breast lines have been lead to bollards inland.

We will sail at 18.00 hrs. today and as the wind is straight on the stern we should blow out of the port without even drifting. Tomorrow we are in Monte Carlo and we will have to anchor as there is another ship alongside. I have been keeping an eye on the weather as with all this wind here in Marseilles; things can be very nasty as well in Monte Carlo. The good news is that the wind is going to die down the bad news is that it always takes longer for the swell to die down as well. If the weather forecast is correct, then the ship will have no problem in making a lee side for the tenders alongside but it might be a bit of a wobbly ride as soon as the tender clears the ships bow and before it is safely behind the breakwaters. (and vice versa). Time will tell and we will find out tomorrow.