By 06.30 we entered the Bahia de Banderas at which inner end Puerto Vallarta is located. Being located at the end of the bay is really very nice, as the town thus misses the brunt of the storms that come by during the hurricane season. Only, on the rare occasion that a hurricane turns into the bay, is there a real problem but that is seldom.  In the good old days Puerto Vallarta was a sleepy fishing village frequented by celebrities and made famous by some movies. It is understandable that famous people liked this place as it is not as hot, hot in as further south and if you still find it too hot, you drive up the mountain and it is nice and cool.

And cool is was this morning when sailed into the bay. Temperature around 16oC/61oF very pleasant to be out and about.  We were indeed the only cruise ship in port and thus we docked at Pier 1 which is the cruise terminal. The captain had once again decided to put the Pedal to the Metal and arrived early in case the local Health Authorities wanted to carry out an extensive inspection but I think they had heard the good news from their colleagues in Manzanillo  as we were cleared without any wobbles. 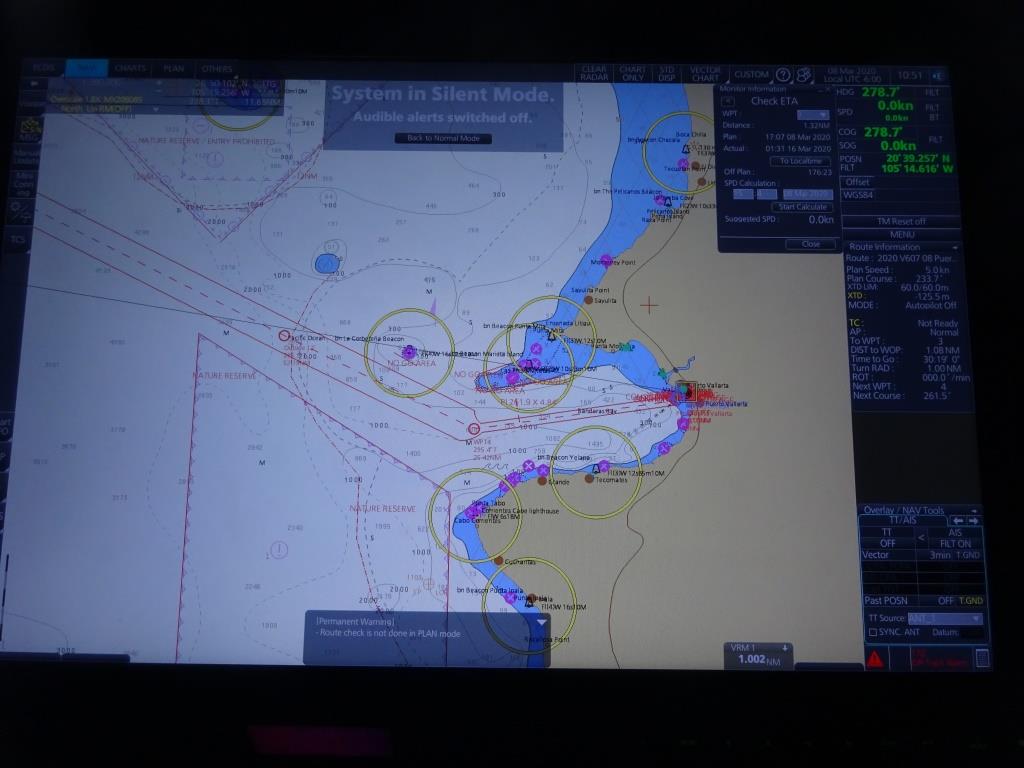 This is the electronic chart with our Path width for sailing out of the Bahia de Banderas after departure. We use a fairly narrow safety corridor while in the bay, and once in open waters  it gets wider in size. Having to do this is all part of the legacy of the Costa Concordia, to ensure that a ship will not go “sightseeing” outside  the most ideal safety margin.

I have been coming to Puerto Vallarta since 1982 and thus have seen it grow. Back in 1982 we had to anchor as there was not even a good pier, only something small and dilapidated for small cargo ships. On the other side was what somebody with a lot of optimism called a navy base and there were 3 apartment blocks/high rises. We liked those very much as with our bad radars and the early morning haze, it was our easy way in. We just aimed for the middle one and all was well in the world.  Then a new pier was built in the winter of 1983 and the port was dredged somewhat. That made it possible for a ship dock at the pier and a second one to go inside and lay behind two anchors and ropes ashore next to it.

In the winter of 1984 that was the Star Dancer which was a ro-ro ferry/cruise ship and which tried to set up cruises where you could take your car with you. That did not really work as there were not many Americans who were willing to take their car to Mexico, so the ship ran more or less a regular cruise and the car garage remained empty. Later, they built cabins in and a casino I believe. I will never forget that ship as I had to pay for the ships postcards when I went for a visit; and even the cheapest Greek outfit that was in the cruise business did not do that. 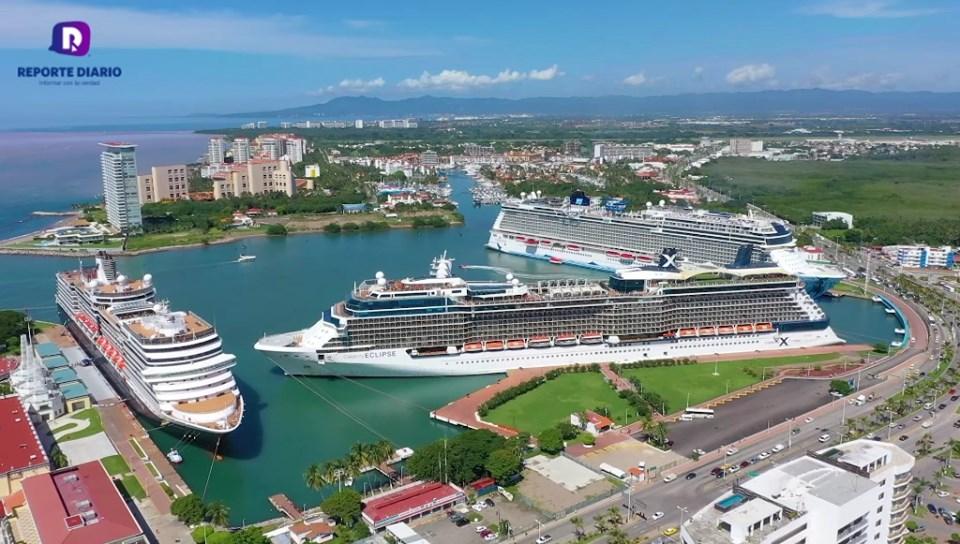 With the big boys in port, it can get quite  tight for everybody to fit in.

Then Pier 2 came, which we now call the Wall Mart Pier and then, a few years ago, Pier 3, the Navy Pier. (Although the navy has nothing to do with it). The Navy docks have improved through the years as well but they are now wedged in between a large Marina and Pier 3 cruise ship pier. Originally the harbor was just a natural swampy pond but by walling it in with Piers and dredging it out, it is now a regular harbor. And because it is deep enough, some very big ships go in and sometimes it only just fits. With the bows and sterns only a few meters away from each other and the ships having to come in the right sequence otherwise it does not fit. Today, being the only ship, we went nose in and once clear of Pier 1, swung the stern around and then went astern alongside.  But if Pier 3 is already occupied and you are a very long cruise ship, you might have to sail in stern ways and then angle around the knuckle of the pier.

Although the cruise business is important, many tourists come for fly-stay holidays and thus the town is always busy. Opposite the port is Walmart, Sam’s Club and a Shopping Mall called the Galeria and thus traffic is very busy as well. A lot of our guests go and visit Wal-Mart only to find out that it sells the same stuff as it home but in Spanish. For our crew it is heaven, cheap shopping just across the street and therefore they always hope that we are at Pier 2 or 3, as that is a lot closer to Wall-Mart than having to  walk all the way around the Cruise Terminal. But if you are the only ship, this is where you go as the shop keepers in and around the cruise terminal want their pesos as well. 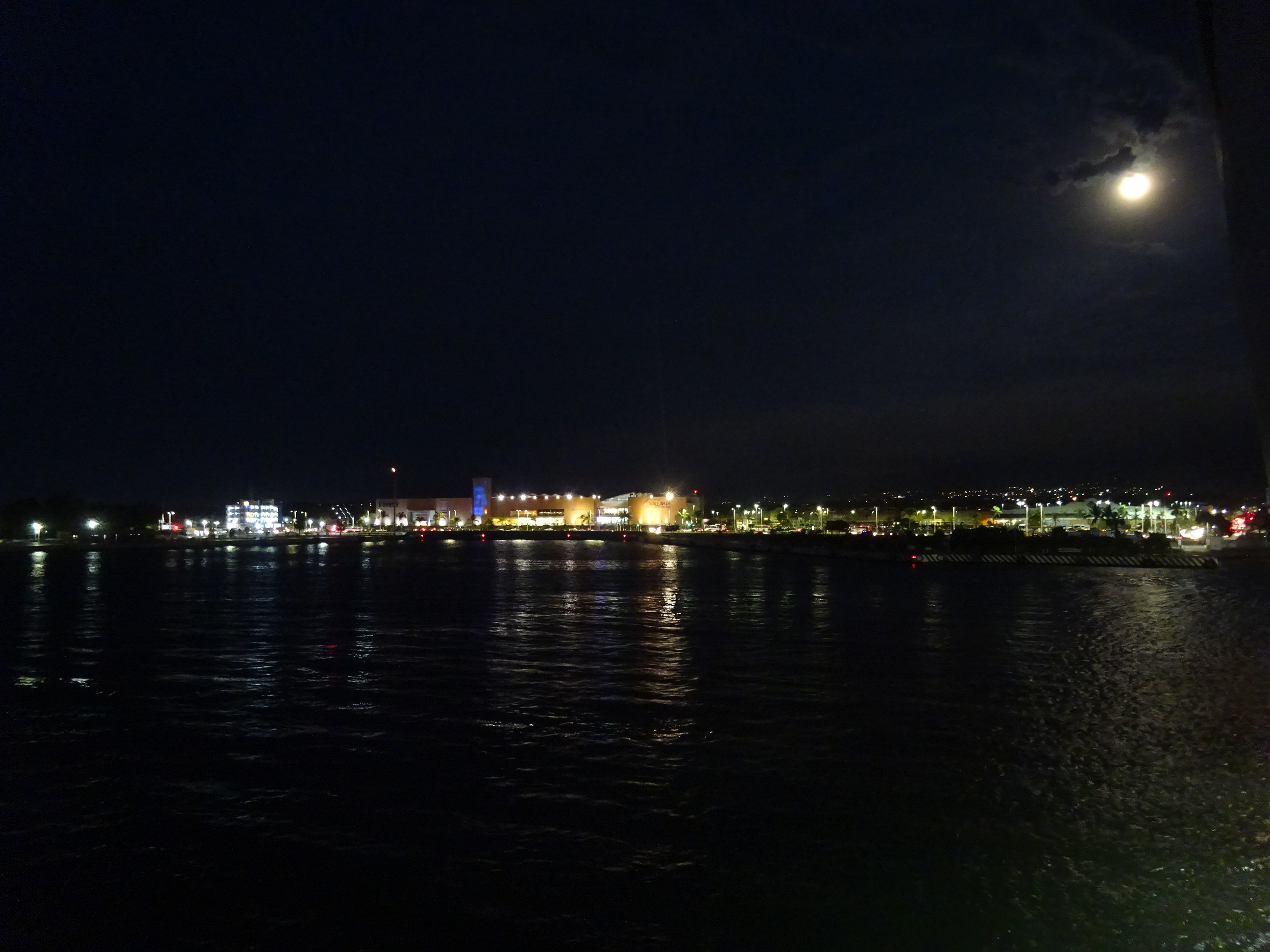 For the romantically inclined: This Puerto Vallarta Walmart by night.

We stayed here until 20.00 hrs. and then sailed out into a nearly flat sea passing the local pirate ship that was on an evening cruise. In the past they used to salute us with a gunshot but as that generated complaints from guests on one or two ships, who thought they were under a real attack, it does not happen anymore.