With the Pacific Ocean behaving in a very “pacific” way, all was well in the world. The ocean surface was flat enough for the guests to pick out all the wild life around the ship and there was quite a lot as we are not too far from the shore today. We are sailing along the coast of Baja de California or the Californian Peninsula which has the large water gap of the Sea of Cortez that separates it from the Mexican Mainland. Plus we are right on the Whale – Highway between this area, Hawaii and Alaska. Whales swim from Hawaii over to the area south of Cabo San Lucas and then eventually go north to the feeding grounds of the Alaskan waters. Because they are congregating here, think in a mindset of several “whale lanes” coming together at a round-a-bout and then all going up the north lane; so this were you have the best sightings until you go to Alaska. Just before noon time today, some humpbacks gave a spectacular show on the port side of the ship, much to the delight of our guests. 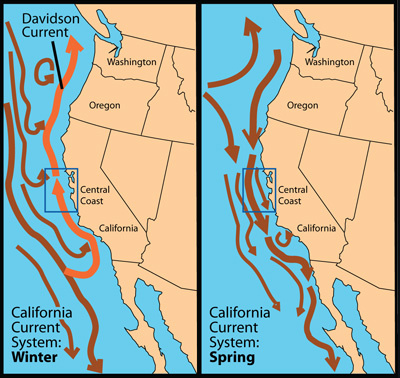 The general status of the current of California and higher up. It brings cold water to the warmer waters south of Cabo San Lucass.

Unfortunately we passed most of this south point area during the night and missed the chance of seeing the waters around Cabo San Lucas. Where apart from the whales, there are also large shoals of Blue Marlin present. Attracted by the meeting of the cold and warmer ocean currents which brings up nutrients from the ocean depths and these nutrients and small animals form the start of the food chain for all sorts of other fish. Same as the whales, also the blue marlin is a seasonal visitor which goes deep ocean for most of the year.  Around this time of the year it is high season around Cabo San Lucas when the Marlins are on the coast. The Operators have a regulated catch and return policy which means the fish stocks are not affected.  Because we passed by at night we did not see all the charter boats going out and coming in, and I am quite happy about that as they do not always follow the rules of the road when regular traffic is coming through. 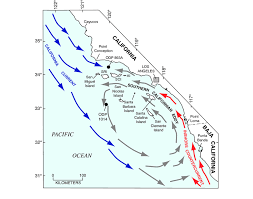 Every captain is a happy camper of he can ride the red current while going up the coast.

Then as soon as you are away from the area, the fishing boats disappear as they are all day boaters, the whale sightings get less as the area where they swim is increasing, and we get the regular ocean traffic back which is on the way from North America to the Panama Canal or vice versa.  Nasty thing for us here is, that most of the time we have the California current against us which brings cold water down from the Gulf of Alaska to the Cabo San Lucas area. Hence the reason why the whales like to travel this route; it is nice and cold.  Thus most of the time we are battling against this current on our way to San Diego. But not always; sometimes the warm counter current (which is caused by the colder water pressure coming down and replacing / pushes away the warmer water) lays a bit further off shore and we just catch it. I have never been able to predict exactly when this happens as no doubt a lot of local circumstances play a role here. Fact is, when the warm water current moves, we get more fog around the area near Cabo. 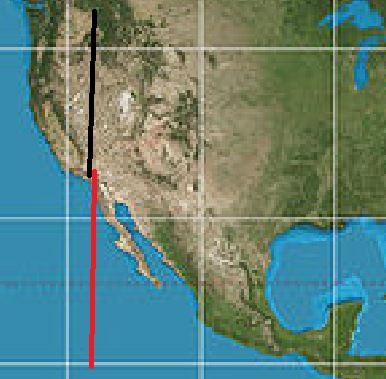 The Mercator Projection which is used by most display charts. USA and Mexico are almost the same.

Tomorrow we have our 2nd sea day and we will still be traveling along the coast of Mexico. Not many people realize how long (North/West) Mexico really is and part of that is due to the false representation on the geography maps that we use. Most of them use a Mercator projection, which is only 100% correct at the point where its projection touches the Earth’s globe. The further away from this point and the larger the distortion. That is why Greenland looks so very big, although being of a reasonable size, it does not go so wide at the top. A better projection is the Peters version, which gives the continents in the right size / context to each other but is distorted in the way it is represented as a flattened globe. The Mercator version distorts the closer you come to the poles and thus Mexico looks a lot smaller than the USA and Canada.  You only really understand this when you are on a ship and you travel for days with the same speed. Then you realizes it takes longer to sail the west coast of Mexico then the west coast of the USA. 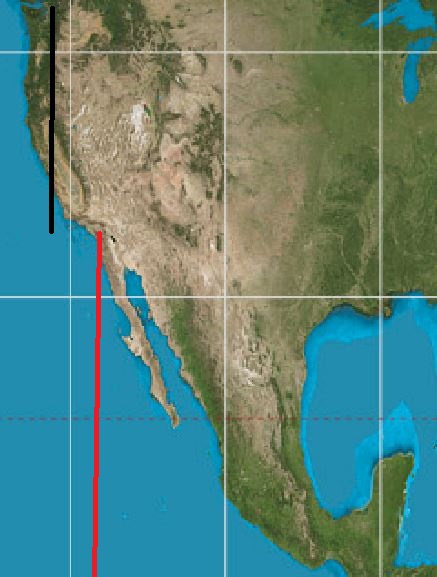 The Peters Projection. The Mexican west coast is now suddenly a lot longer.

Tomorrow we are at sea for our 2nd day. Still along the Mexican coast. Then by 04.00 on the 11th. We enters USA waters and sail for the San Diego Pilot station. Weather has been forecast to still be good and thus we should have a nice final day of the cruise.