The calm weather is holding, we just have some showers in the area, but mainly above land. Mexico is visible at times as we are sailing as much as we can on a straight course and thus the land comes closer or veers away depending on its out croppings. This morning we passed the “nick” on our course line where we change to a more northerly course as the coast also angles back. The most prominent point over here is called Isla Cedros and it is here where we have more current with us or against us or as today, there was not much current at all. The course we are now on, will take us up to the USA/Mexican border and once we pass Ensenada it is only a few miles to the San Diego Pilot Station.

San Diego is a naval base and is big enough to dock several aircraft carriers. Normally there is at least one alongside for overhaul or prolonged maintenance, when new gadgets are built in. The carriers are always on the starboard side when we come in, right next to the USCG base. Most of the smaller navy ships are on the main land side further down past the Cruise ship terminal.  I had the interesting experience a few times to meet a partial fleet, or a complete fleet, coming or going from the base or exercising just outside.

The first time was in 1986 when I was 3rd officer on the Noordam sailing down the coast from Los Angeles to Cabo San Lucas. We were buzzed several times by jet planes and helicopters whose official duty it was to keep a safe parameter around the fleet but un-officially came over to look at the Ladies on the Lido Deck. There was one navy ship which kept calling another one by the name of Norham or similar, only the accent of the caller was so strong (Alabama-nian or something) that we understood Noordam and that was us. So we answered only to be told in a rather unfriendly way to get off the air/vhf as he was having “important communications” with this other ship; which was not answering. So I wished very politely a very nice cruise and left it at that. For the next two hours he kept calling but the “Norham” never answered.

On the way back we came across the same fleet again, only they knew they were right on my course line. Changing course was fraught with dangers as I did not have the vaguest idea about what these ships in formation would do; if I would change course according to the Rules of the Road. So I called the captain and he did not have a clue either. So the decision let’s call them, even if we do not know who to call. So this gave rise to a very nice memory with me on the VHF, This is the Noordam, Noordam, cruise ship Noordam….. Anybody out there in charge of the USA navy fleet on my course line???? Please come in:  We knew that there is always one ship in charge of the convoy, the question just was, would they answer. But yes, 10 seconds later a lady voice came on air: this USS XXXX, what are your intentions. Answer from our side:  Our intentions are to go to San Diego and you are on our course line. What do you want us to do as it seems you are playing war games?  (All sort of war machines buzzing around our ship again) It was quiet for a while; obviously there was a decision making process going on, but eventually came the answer. 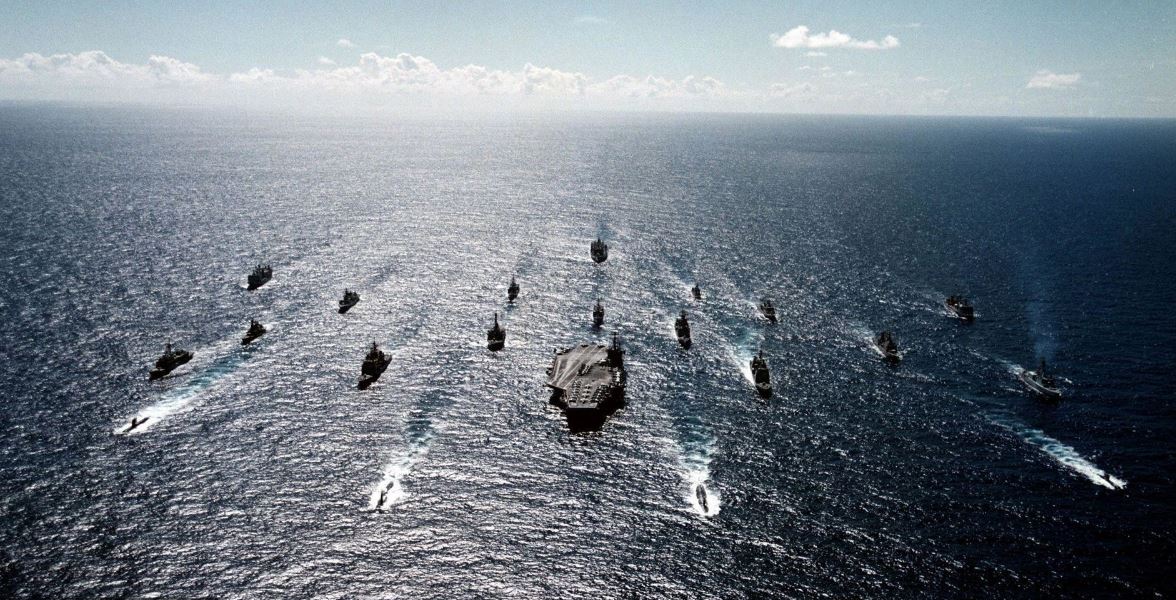 I did not have a camera with me at that time, nor would it have been possible to even try to capture the might of that fleet. But it roughly looked like this, if you put the ms Noordam at the location of that air craft carrier. It was a really impressive moment to see all those grey hulls come thundering by. (Photo courtesy Navy Wallpapers)

Cruise ship Noordam, you can keep course and speed, we will move. And then we had the unique experience of a fleet of about 20 ships (No carrier) splitting up in two halves and passing us on both sides. I think they had decided to make an exercise out of it. Our Captain then went on the P.A and spoke the immortal words to the guests on board: Ladies and Gentlemen, please get out onto the open decks, there is your tax money floating by on both sides of the ship. I tried to say thank you on the VHS but they never answered again. When we told the pilot about it, he was most amazed as he normally could not get any navy ship moved; and here was a young Dutch 3rd Officer who managed to get half of the San Diego Fleet to move. (I do not think that was the case, but I gladly took the credit for it)

So tomorrow, at a very early time, we will be at the pilot station to sail into San Diego. We want to be early as everybody has to get through immigration and seen by the CBP. Also all the crew as the last full crew inspection was 90 days ago. Normally they want to see In transits, like me, at the very end to obtain the zero count. San Diego does it the other way around and all the In transits have to be seen on arrival at 06.30. I think there will be few very unhappy campers tomorrow. Especially if they were not planning on going ashore.

Cruises of the Past