As mentioned yesterday we arrived very early, to start the CBP inspection by 06.30. Contrary to Fort Lauderdale here they wanted to see the in transits first instead of last.  So we all marched through the world stage “in the dark of the night” to show that we were no danger to the country. I got another entry stamp for my collection and I was in compliance again. We were the only ship in and thus we had a large number of CBP officers in attendance which sped up the process considerably. Because here in San Diego there is no option to process people in the terminal; we first see the CBP Officers doing their immigration job on board the ship and then we see the same ones again doing the Customer Officer Job in the terminal. I ended up with the same officer twice and thus first he gave me a new entry stamp and ashore he checked if he had stamped me.

I have always liked San Diego as downtown is very close to the ship and people seem to be less hurried than in a lot of other places around the USA. This morning I went ashore and bought a new clicker (remote control for power points on computer) as there is a big Office Depot very close to the ship. Down town / read Gas town is just a few blocks away so a nice stroll for the morning. To my dismay Macy’s is closing down here, and as I have a penchant for colored jackets, this department store always has my focus. I am still on the hunt by a bright yellow one, but so far no luck. And I cannot order on line as European and USA sizes differ and then if you throw “slim fit” in the decision making process, it means I have to put them on, as one slim fit – is different to another – slim fit. Downtown must thrive on the restaurants and bars in the afternoons and evening as in the morning there was not very much going on, apart from a larger number of Hobo’s having a sort of conference in the open air auditorium. 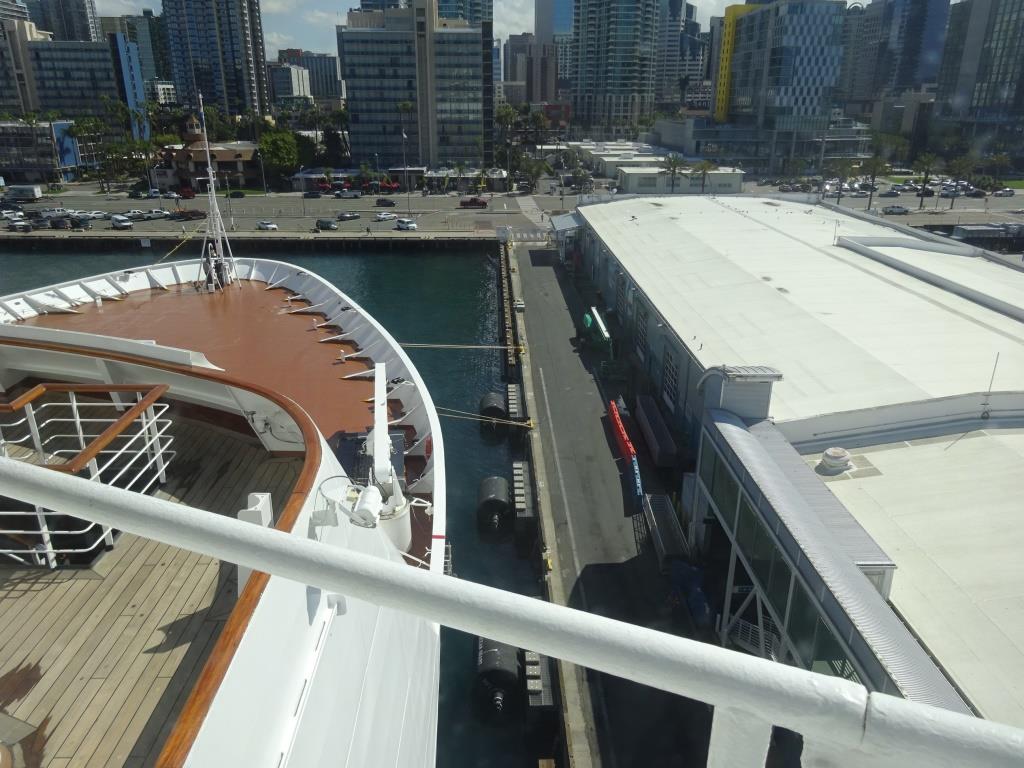 Docking with the nose in -almost- downtown. This dock has very nice and big fenders and they are there for a reason; in case the current pushes the ship faster than anticipated.  Normally our nose would be much further forward but due to using shore power today, the captain had to stay closer to the end of the pier. (and even let the stern stick out into the river)

San Diego is a nice a spacious port, hence the reason why the US Navy has settled down here; but it can also be a treacherous place. First of all because of the fog but also because of the currents. The port is a river estuary and as they are normally funnel shaped, there is a considerable current which occurs during the flood and ebb. Because the entrance is a sort of semi-circle (we go north, east and the river continues south when coming in) the current does strange things and instead of flowing in line with the shores on either side, it bounces back at certain places. 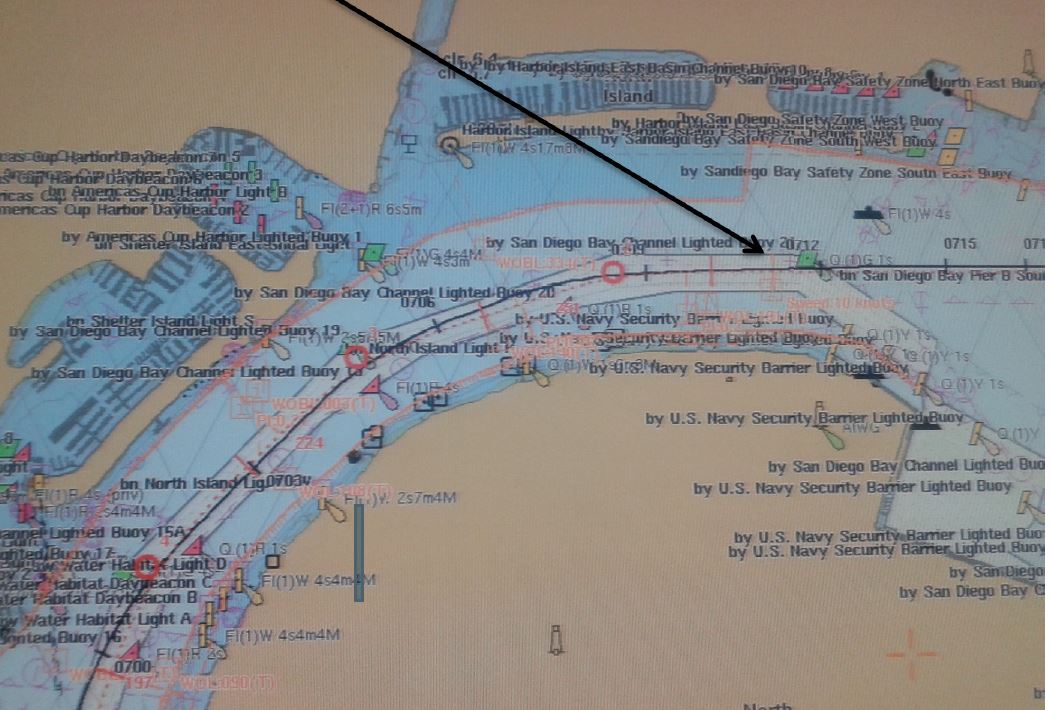 The big turn in the port is where we line up to go to the dock. Where the arrow is, is a crucial moment, as here you find out if the current is following the curve of the port, or that it goes straight, or that it even goes North East and then bounces back.

Our cruise terminal is one of those places. It looks so easy. The dock is exactly in line with the easterly heading of the port, and thus you think, ok when I approach the dock, the current will follow the river bed and we are sailing out of it. And that is not the case. The flood pushed into the top corner where the old sailing vessels are located (Star of India and an Old Russian Submarine) and then bounces back exactly perpendicular to the dock. So if you do not pay attention to this, then you hit the dock instead of going nicely alongside. With ebbing it does the same thing. The current pushes north, bounces back and then goes west. 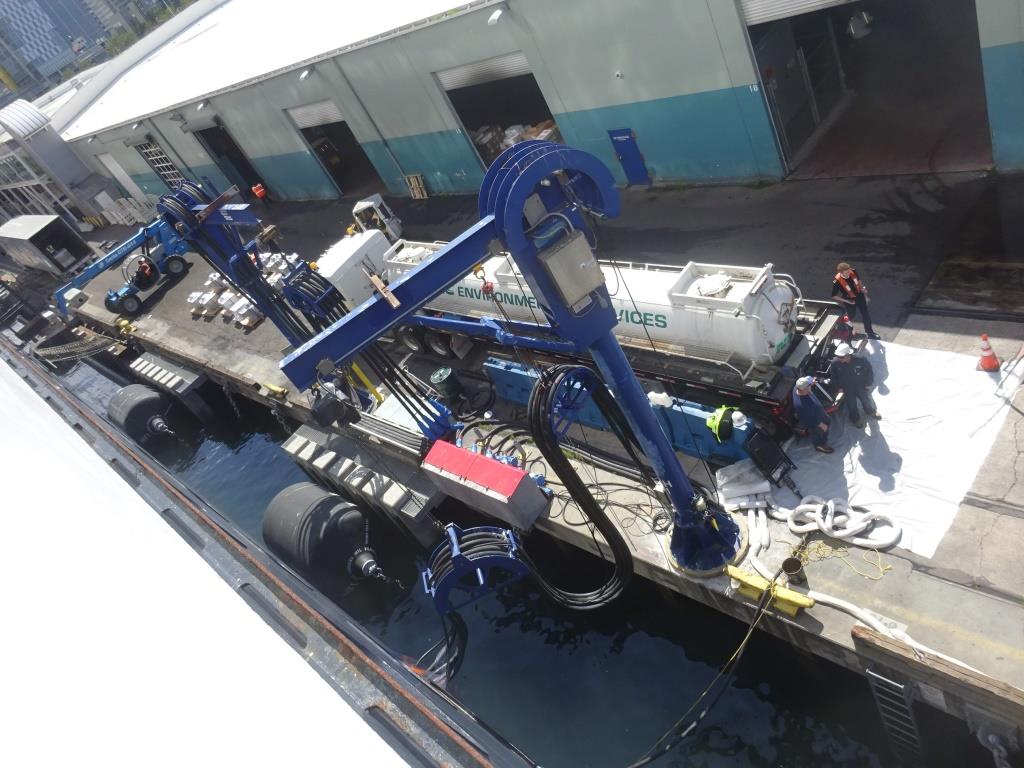 The shore power connection. Not 110 volt but closer to 6 KV. Two stations close together and I just wonder why the 2nd one  could not have been put further along the pier to give ships a better option for docking. With this sort of power you can not hook up an extension cord so you have to park your ships socket opposite the shore line.  The big white tanker on the dock is there to collect “sludge”. Which is mainly oil which the ship cannot further process but can still be used / recycled on the shore.

San Diego also offers the option of Shore power and we gladly use it. This means that as soon as the plug is in “the socket” the engines go off for the remainder of the day. That makes the Chief Engineer very happy, but at this dock the Captain very unhappy. For reasons lost in the mists of time, both shore connection hook ups are near the end of the dock. Holland America Line ships has their connecting station almost amidships. And thus we had to dock further aft than what is normally prudent. We had the Rotterdam sticking out considerably.  Today was a nice day, but if it would be windy from the South or North, then it is not safe to dock this way. But today it worked, so we were on shore power.

The conning tower of the USS Abraham Lincoln. Taking with a tele lens to the other side of the harbor. In front of the carrier is a floating security barrier installed to avoid  fast boat attacks  as a carrier in port without its protective air wing  has limited capability to defend it self.

From where we are docked we cannot see much of the navy hardware when we are in port apart from the US navy ships. There is the old one / museum next to us USS Midway Pennant number 41 and opposite at the regular carrier dock, was the USS Abraham Lincoln Pennant number 72.  I do not think that she was completely out of service for overhaul as there was a Radar turning and a few planes on the flight deck. During most of my visits, there were at least 2 or 3 carriers at the dock, but now only one so I assume the fleet is on deployment somewhere and if I recall correctly part of it is currently near the east coast of Africa where recently things were a little bit tense.

We are now having two days at sea again, retracing our route to Puerto Vallarta. Captain Bas van Dreamed is still in command (see bio on this website under current captains) and all is well in the world. As you can see below all the nasty storms are far to the north and we are going south.

The weather / swell chart of the North Pacific for the next 24 hrs. We are nicely sailing in the blue.