Because we are doing basically the same cruise back to Fort Lauderdale we also have two sea days after leaving San Diego in the same way as before when arriving. For our cruise see chartlet below. How this cruise and future cruises will develop is everybody’s guess. It all depends on what happens with the Corona Virus and what wise men & women will decide about what is best. No doubt everybody is following the news hour by hour as things keep changing all the time. Carnival Corporation is constantly reviewing the situation and we get updated all the time. Processes are refined by the day, depending on what the Experts learn or what the political situation requires. Yours truly has now also been affected by the situation as well, in So far that I cannot travel around the fleet for the time being.

All our ships are healthy but as the company does not want to take any chances that a traveling person including a traveling Fleet Master would catch something while on the way, Inter ship travel has been postponed for the time being. So I am marooned on the beautiful and elegant ms Rotterdam. For those of you who know the ship, there are worse places to be marooned. Hence the plan is to stay on the Rotterdam until April 22nd and then go home from Rotterdam in the Netherlands. All depending on the way the situation progresses and what tomorrow will bring. Thus my blog will now continue with a “Rotterdam” flavor for that whole period. And will now encompass this Trans canal cruise, an East Caribbean Cruise and a Trans-Atlantic cruise.

Our return cruise to Fort Lauderdale.

As you will have heard the cruise companies are offering a no strings attached cancellation program for those who would like to stay home and thus the ship is not completely full. Not ideal, but as I always try to see things in the most positive way, the time made free now can be used by the crew to carry out the extra cleaning protocol that we have implemented. As said our ships and the Rotterdam is clean and we will do our best to keep ashore what is ashore.

So with all precautions in place the good ship Rotterdam is sailing over a smooth sea, with dolphins, seals and the occasional whale frolicking around the ship. Most of the seals were seen last night on departure from San Diego as they seem to enjoy swimming along with the ship, and (maybe) hoping for a free meal if the propellers would hit a fish.  So they swim in the wake of the propellers, just outside the white stuff and bob up and down.   Once outside we lost them as we sped up but on occasion we still see them in the distance. 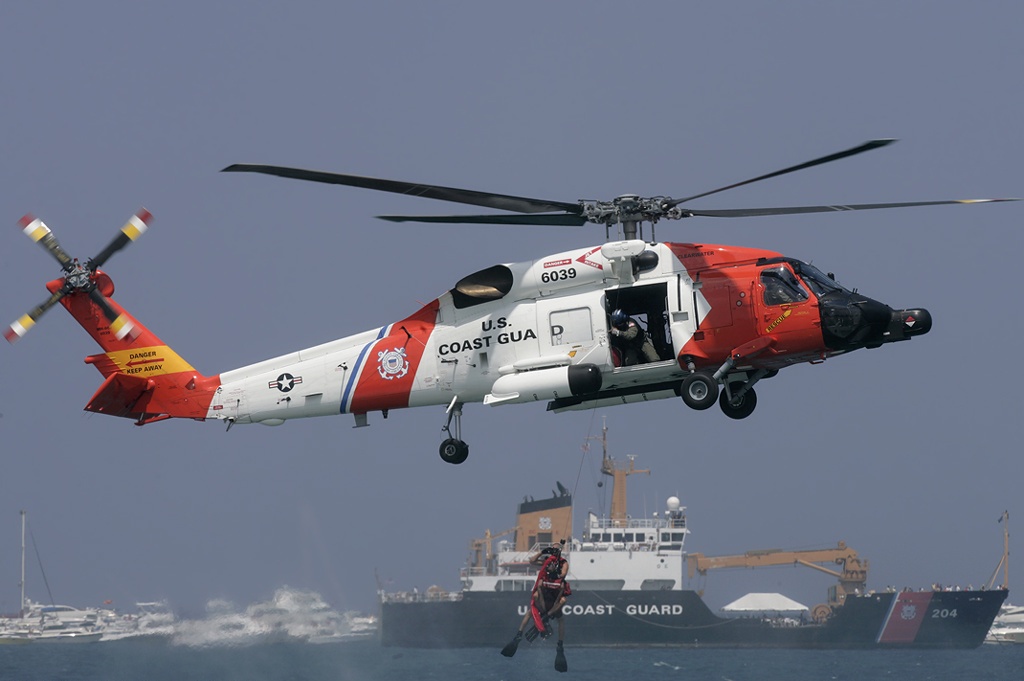 A USCG -Jay hawk- helicopter doing exercises. The man on the wire is called a Swimmer and the operation is controlled by the Winch man (see in the door opening) while the pilot is fully focused on keeping a stable as possible position. (Photo courtesy USCG)

What we also saw, was a Navy helicopter doing Search and Rescue exercises about a mile away from the ship. For that purpose they had a smoke beacon in the water. Of course some of the guests at once thought it was a ship on fire but I was able to calm down those in the portside Lido, with just a simple observation: Ships on fire do not bellow pure white smoke. It is either dirty grey, brown or mostly black. A few minutes later they all realized what was going on as the helicopter flew over again.  They were exercising approach maneuvers and hanging maneuvers but I did not see a swimmer (frogman for European Navy Experts) going down to the beacon.  I think the focus of the exercise was on realizing that the smoke on the water does not necessarily indicate the same wind direction as 300 feet or more higher up. 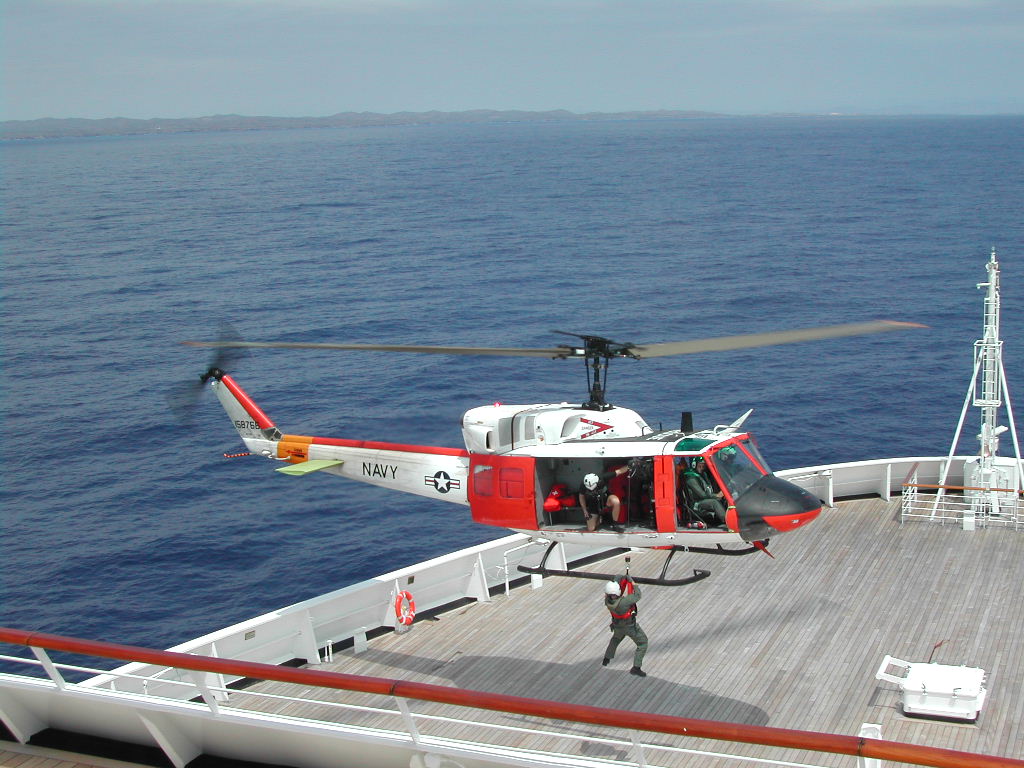 And this is the Navy of Guatenamo Bay when I took the Maasdam there. They used a more open helicopter as it was nice weather and  the base was only 5 minutes away.  (I think they were painting the helicopter when we called them as I had never seen a Navy helicopter before, or since, with green winglets…… first coat of primer ????) But they got two patients off the ship in a very fast way and they both survived. So that is something to appreciate. For the skills of the pilot, the winch man and paramedic hanging on the wire.

That is a thing that we have learned during the multiple medivacs that are carried out on our ships. Often the pilot gets pre- information about wind and weather and then when he/she arrives at the ship they have to make their “own weather forecast” as the wind still varied in strength and direction and then there is the turbulence in the air caused by the ships movement. Most of the time we have USCG conduct these medivac’s but I have also received help in the years past from the Navy when we had a medical situation (Guantanamo Bay). Here in San Diego it would normally be the USCG that comes out, but it was good to see that the Navy was also practicing as a retrieval from the sea is not soo easy as it looks.

Tomorrow we have the second sea day, and then we should get a bit of current with us, if the current is where it normally is. The weather should continue to be good as all the nasty stuff is staying to the North.