Sailing through a smooth Pacific Ocean, as smooth as I have ever seen it, we approached Manzanillo. It was smooth enough today to see the birds sitting on the water and the turtles peddling by.  Or better said surfing by if they were close to the ship. When I first went to sea I always worried about turtles getting in the propellers until I started watching them to see what happened when they came by. Well, what happens is that they are pushed aside by the bow wave. Turtles, due to their shape, are like corks on the water; corks that can swim. So when they are swimming on a ships course line, they are pushed aside by the pressure wave that is generated by the bow. That bow wave spreads out further and further away from the ship’s hull and the turtles follow, bobbing along on the crest of the wave. By the time they near the stern of the vessel where the propellers are, they are well clear. It might be a bit of a startling experience for Mr. or Mrs. Turtle to be lifted up by this un-expected wave and carried sideways but it does ensure that they do not come to harm.  Bulbous bows were invented to reduce fuel consumption but they also work very well as a gigantic turtle mover.

Even when the ship goes slow the pressure wave is still there and while sailing into Manzanillo bay, the turtles aiming for the same direction where gently pushed aside while the good ship Rotterdam steamed towards the anchorage area. With the Corona virus on everybody’s mind and cruise ships being the focal point of attention, local health authorities do take precautions. Same as in Corinto, the Health Authorities here wanted to board & clear the ship before it was allowed alongside. Hence we were directed to the anchorage and a deputation of the Local Health Board came alongside by launch and set up shop with the Doctor. Civil Servants are never in a hurry so it did not go as quickly as we had hoped for. The moment the Captain was advised that there would be a pre-inspection, he put the pedal to the Metal and got into the bay by 11.30. But the anchorage where we had to float was not close to the dock and as the pilot was not allowed to board until the All Clear was given, he was not coming out until the all clear. All in all it was an hour later than planned that we were alongside with the gangway out. But the ship is flexible and thus we are simpler staying an hour longer so it is equal time ashore. 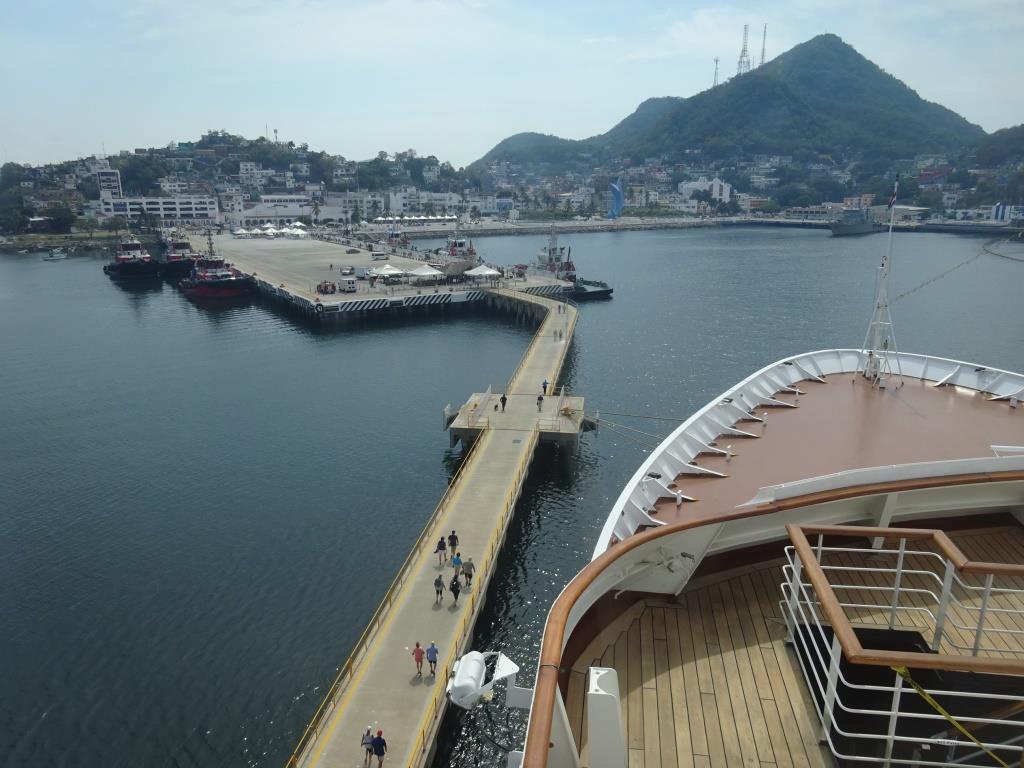 The cruise pier is a long and narrow arm, but with a wide podium at the entrance. When there is no cruise ship in port, the area is used as a harbor depot but now we had the local bands playing under the white canopies. The town itself is right outside the Dock gate. But do not expect a tourist place such as Puerto Vallarta, this is much more laid back. But it still has some old local Mexican charm.

In the mean time we did lose the Seven Seas Splendor. They did the same thing as we did, hugged the shore to sail around the Tehuantepeccer, but their schedule is much slower than ours from now on. While we had Huatalco they had a sea day. While we are now in Manzanillo, they are in Acapulco and when we are in Puerto Vallarta they have a sea day again. Eventually they will also call at San Diego, but a day later. 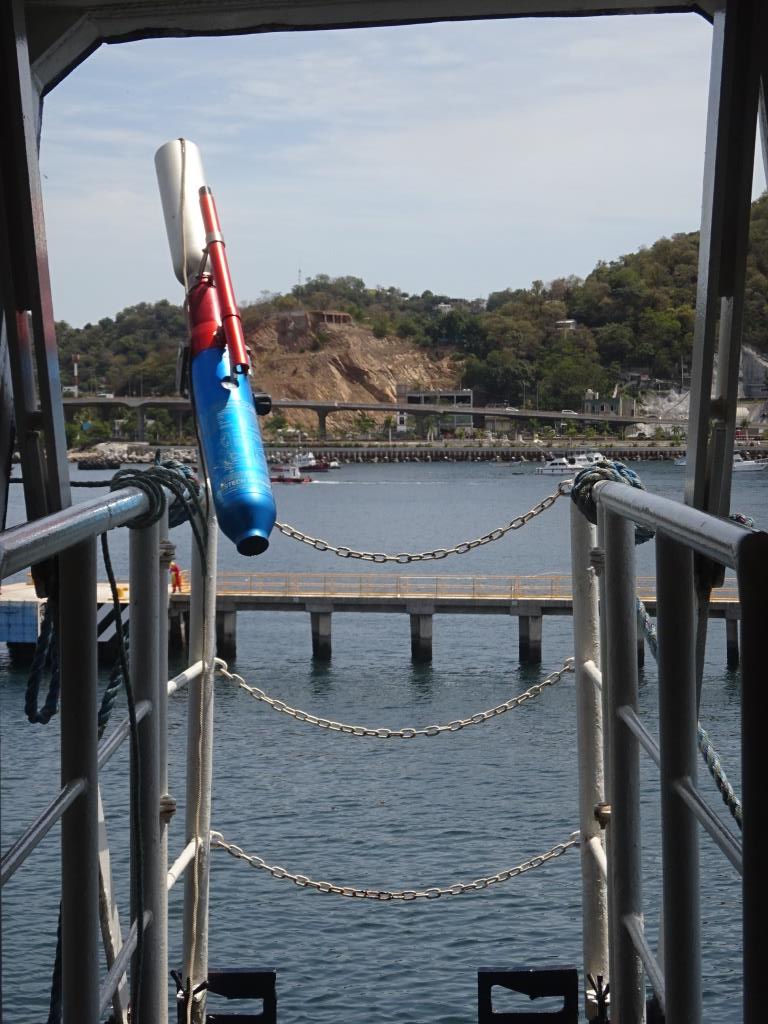 Today I was on the forward mooring deck assessing the arrival procedures, and we used a Line Gun to get the messenger line ashore for the ropes. We have a gun like this on standby if current and wind are expected  to make it difficult to bring the ship alongside.  A Line Gun reaches a longer distance than a man can throw a rope, so you can also use it  to get a rope ashore faster.

I am a bit amazed that they call at Acapulco as the port is still a bit of a question. The town itself is fine, but the outlying areas are not. And thus if you call there you have to ensure that all the guests remain in the town / safe areas.  Most will do so, but there is always One who will venture out. And when something happens, it is not the One who ventured out who will be held accountable but the shipping company who took everybody there. As far as I know, things are getting better by the year and hopefully we can return there one day. This year there are 30 cruise ship calls scheduled but that is nothing compared to the good old days. The locals must have suffered greatly with cruise and land tourism disappearing and I suppose that most of this industry is gone now. For the port it mattered less as the cruise pier was also used for exporting Volkswagen Beetles that were produced in a nearby factory.  As far as I know, the production of the Beetle has ceased but I assume that another model is now being made there.  But hopefully we will return again. Acapulco always scored well with the guests as it was a wonderful port for the guests who wanted to go out in the evening as well for the crew. Holland America pulled out starting with 2017-2018 winter season because of security concerns and now it is wait and see until better days arrive. 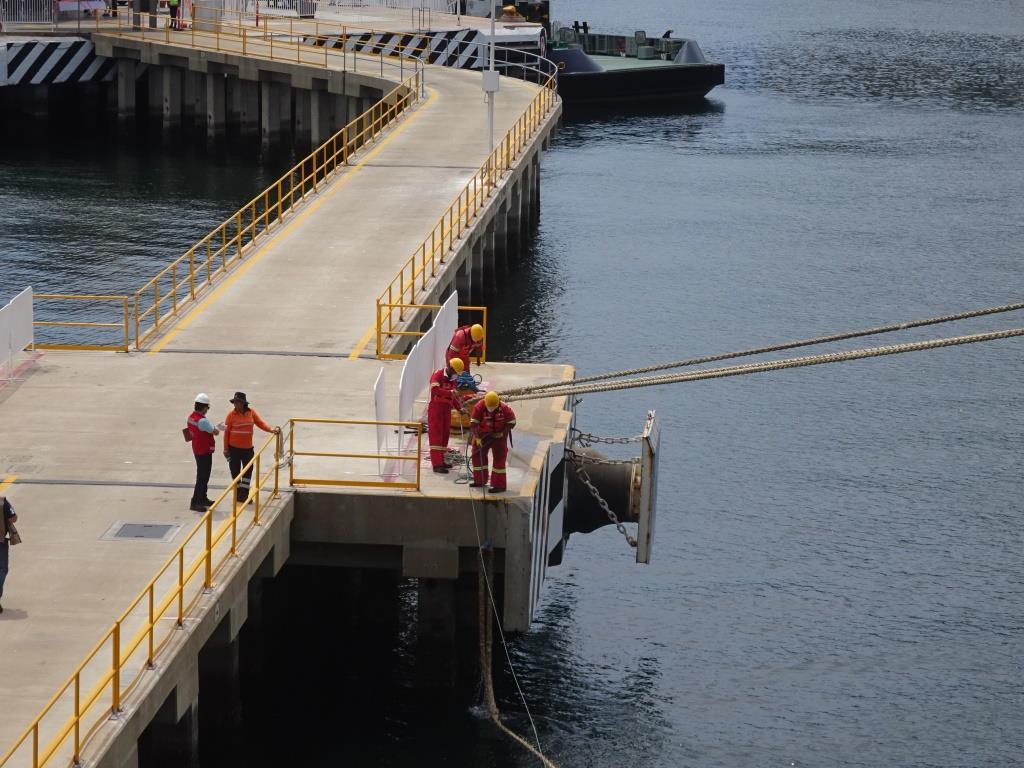 This what I like about Mexico. In all the ports the linesmen are in some sort of identical coverall and hard hat. They do not complain or argue, they just pull the ropes ashore and put them where they have to go.

Tonight we will sail at 20.00 hrs. and then race around the corner to Puerto Vallarta.  Around 07.00 we will enter the Bahia de Banderas and then enter the port around 0900. Maybe a bit earlier. We are supposed to be the only ship in port but that might not be true as the schedule I am using from the internet has not been updated in the last few months.

Weather for tomorrow: Sunny 84oF / 29oC and very little wind.