As mentioned yesterday, we prepared ourselves for the Tehuantepeccer storm that would be blowing this morning. And we prepared with an abundance of caution. And it was a good thing we did so as this was a real nasty one. We always expect 50+ knots of wind and heavy seas (away from the coast) but it blew a lot harder than 60 knots at times. The Captain reported that the highest wind gust observed was 88 knots and periods of a sustained wind of 70 knots between 05.00 in the morning and 07.00 in the morning. That is Hurricane force wind strength. Seas were observed between 12 and 18 feet at times. So much wind blowing caused the ship to list somewhat, although the engineers pumped everything they had from the low side to the high side to minimize the effect.

Did the guests notice a Hurricane force wind? Yes but only by looking at it from the Lido windows. The Lido was busy with lots of them sitting behind the windows and watching Mother Nature rage around the ship. But because the ship hardly moved it did not feel like a very bad storm. That movement of the ship was prevented by going north and skirting the wave field at the 12 feet line. (The ship remains rock steady up to 10 feet and then starts to move more and more with higher waves) 12 feet does not cause that much movement if we keep the angle correct and it minimizes the mileage we have to make extra. Because every mile extra might cause a later arrival in the next port. 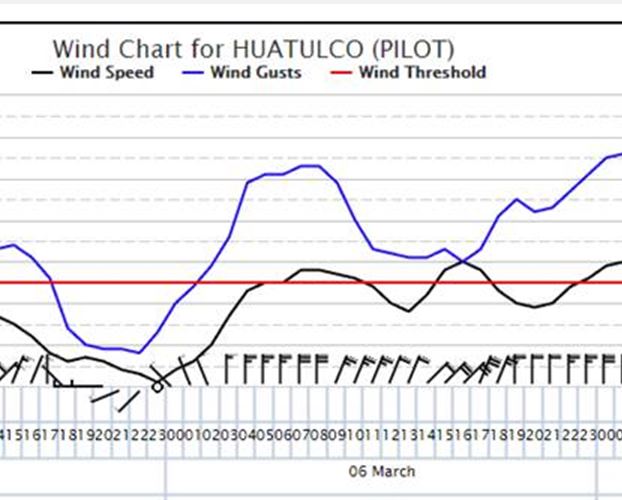 The wind in Huatalco. The red line is  25 knots in the bay and that normally works as the wind is in line with the dock. Going over the red line with (blue) gusts of up to 50 knots is a definite  not possible. (Diagram courtesy Huatalco pilots via Capt. Bas van Dreumel)

So this morning we had a real Tehuantepec experience. It was wind still, completely flat, at 01.00 in the morning and then slowly but steadily the seas picked up a little bit and then by 0500 we got the full whammy. By 08.00 it started to die down again and by 11.30 we had completely flat seas again. It is really a very local phenomena. This time we knew in advance that it was going to happen so we could plan and mitigate. But a Tehuantepeccer wind can also suddenly erupt without the weather guru’s having any indication that it is going to happen. Then as a captain the only thing you can do is turn the ship into the wind and try to get as quickly closer to land and out of the wave field.  That solves the ship problem and ensures the safety of the guests but is then hard to explain to the guests of what and why it exactly happened and why we then arrive late or have to cancel a port. The guests expect that with all our weather charts and prediction gadgets we know well in advance what is coming. In most places of the world we do but not always here. Today we did and that helped to prepare the guests and get them in the right mind set. Nobody minds a bit of wobbly weather as long as it does not affect breakfast. 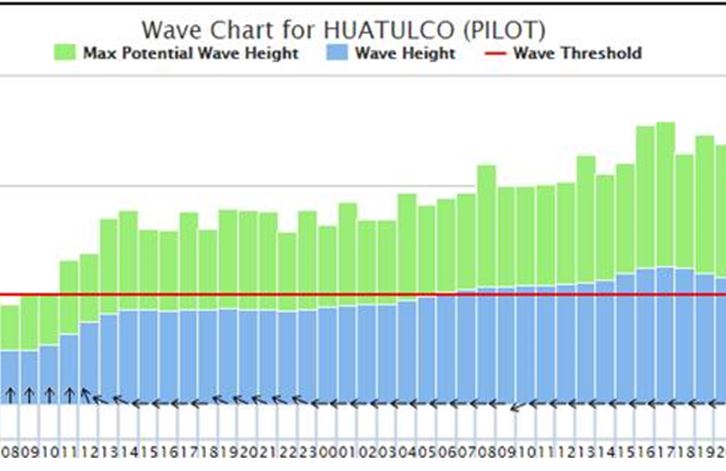 If the wind goes over the safe limit, then the swells will do so as well. Maximum today (top of the green) 2.5 meters. 1 meter is considered do-able for safe docking but that does not mean it is safe for the gangway. We like no more than a foot there to avoid the gangway from moving too much….. and preferably even less. (Diagram courtesy Huatalco pilots via Capt. Bas van Dreumel)

And how was it in Huatalco today? Not very nice. The Tehuantepec wind indeed curled around the corner into the bay and drove the seas along the cruise dock. Waves along the pier were more than a meter (3 feet) above the safety limit for being alongside and the sustained winds would not have even made it possible to get into the bay, without having a fair chance of opening a new Holland America Line Hotel as the reefs are very close to the fairway to the dock. 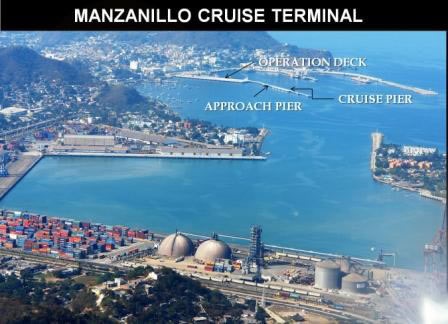 Overview of the port of Manzanillos or Manzanillo in English. They put the cruise terminal in the outer bay, where there can be more swell, but from the cruise pier you can walk straight into the town.

So tomorrow we are in Manzanillo.  This was originally a fisherman village blessed with a natural bay, a very deep bay, which gives good shelter from the rolling ocean swell. So naturally they built a cargo port in the deep end of the bay. A number of years ago they then expanded the port with a dedicated cruise terminal / pier.  Something I remember very well as it was Yours Truly with the Veendam who was the first ship who docked at the new pier. Since then Holland America has been calling here off and on. But there is the challenge that this port is just too far, or just too short in the “distance table”. Which means that you can only do a half day call here, otherwise you cannot make the next port at a decent time or stay in the previous port long enough. Zihuatenego (close to Acapulco) is also such a port where you arrive late, or have to leave early. In the good old days Holland America solved than one by arriving around lunch time and then staying to 2300 hrs. as Acapulco was only just around the corner.  Due to violence, Acapulco is currently out of the picture and that has also impacted the cruise calls at Zihuatenego.

This time Manzanillo works out for us as a nice alternative but again its geographical location means that we have to make do with an afternoon call here, which we will now do.

Weather for tomorrow: Sunny 83oF / 28oC and a gentle breeze. Not as hot as in Puerto Quetzal. Which is good as I am continuing with my Tender exams.