Just after sunrise in very hazy weather and it being nearly wind still as well, did the good ship Rotterdam arrive in Puerto Quetzal. The haziness indicated that it was going to be a very warm day and it was. Only in the late afternoon did it breeze up and thus we did have a bit of cooler sea air circulating over the deck. Since last summer, the local authorities have repaired the cruise terminal and thus could we dock there again. This cruise terminal is made up of fixed bollards and dolphins with a floating pontoon in the middle. And cruise ship captains are very hot on getting this dock as it means that the gangway always has the same angle because the pontoon goes up and down with the dock in the same way as the ship does. This dock has been made for the average cruise ship length and a smaller ship, such as our S class fits perfectly, and the same goes for the Vista Class. The R Class, named after the ms Rotterdam, is an in between length and that means that the Gangway location is not ideal for being landed on the pontoon. Thus we had to relocate the Gangway to the Marshalling area which is normally for luggage, stores and spare parts. But it is amazing what a few sheets and curtains can do to perk up a work area to a 5 star cruise ship lobby.  The Seven Seas Splendor, followed us again and had to dock with the cargo ships. I really am getting the idea that they just follows us, as we seem to know where we are going. See if we can confuse them tomorrow. 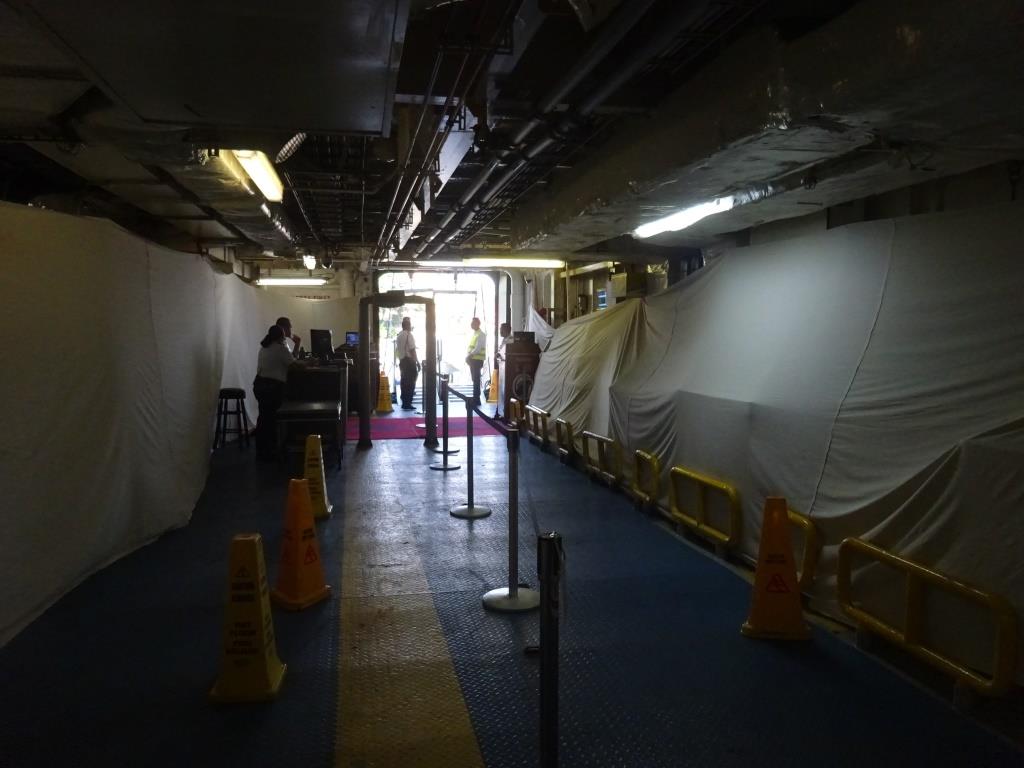 Our improvised gangway today. leading through the Marshalling Area. One Lady could not contain her curiosity and had to peek behind the sheets and to her utter amazement she saw fork lifts and crew bikes.

I spent my day in the ship tender, taking the sailors through their paces to refresh their memories in how to operate a tender. And as the temperature in the tender went will above the 120F I must have lost at least 3 pounds today. But it is all for a good course and for the betterment of the company.

What the talk of the town was today, or better said”in the ship”; the Captain had to decide to change our cruise schedule and cancel Huatalco and to go Manzanillo instead. Reason: the Tehuantepec wind is blowing again. Deep in the archives of this blog there are numerous blogs dedicated to the Tehuantepec wind and the nasty consequences because of it. To refresh everybody’s memory: This wind, also just called a “Tehuantepeccer” is a wind that blows away from the land and which can cause a local but very nasty storm. It can occur when there is a Cold front laying over the Gulf of Mexico and such a Frontal System can then create a high pressure system in the south West part of the Gulf of Mexico. And that pressure has nowhere to go. 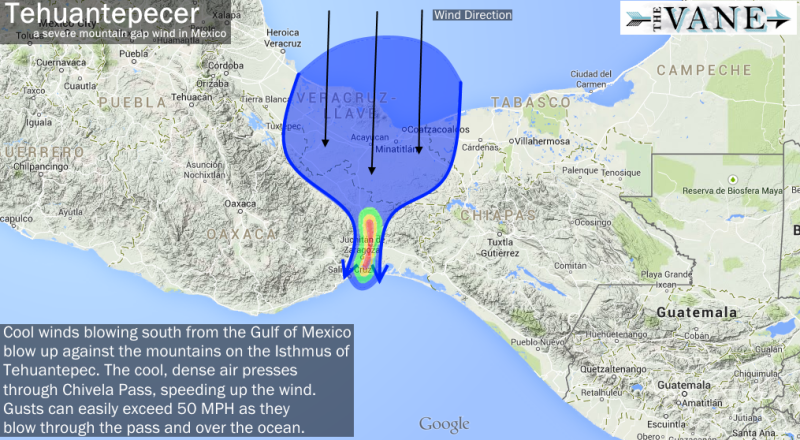 But in the Sierra Madre near a port called Salina Cruz, just south of Huatalco, is a gap in the mountain range and all this high pressure gets pushed through there and in the North Pacific Ocean. Imagine a balloon that you have just blown up and then start squeezing it. All the air comes out the small entry hole.  Here, the area where the wind is going to, is called the Gulf of Tehuantepec and the wind called a Tehuantepeccer. That wind can reach velocities of up to 70 knots on a good day, and while that wind is not very nice if it pushes against the hull of the ship, the further it blows out to sea the more swell it causes and waves of up to 15 feet are not unusual. We do not want to be there if we do not have to. 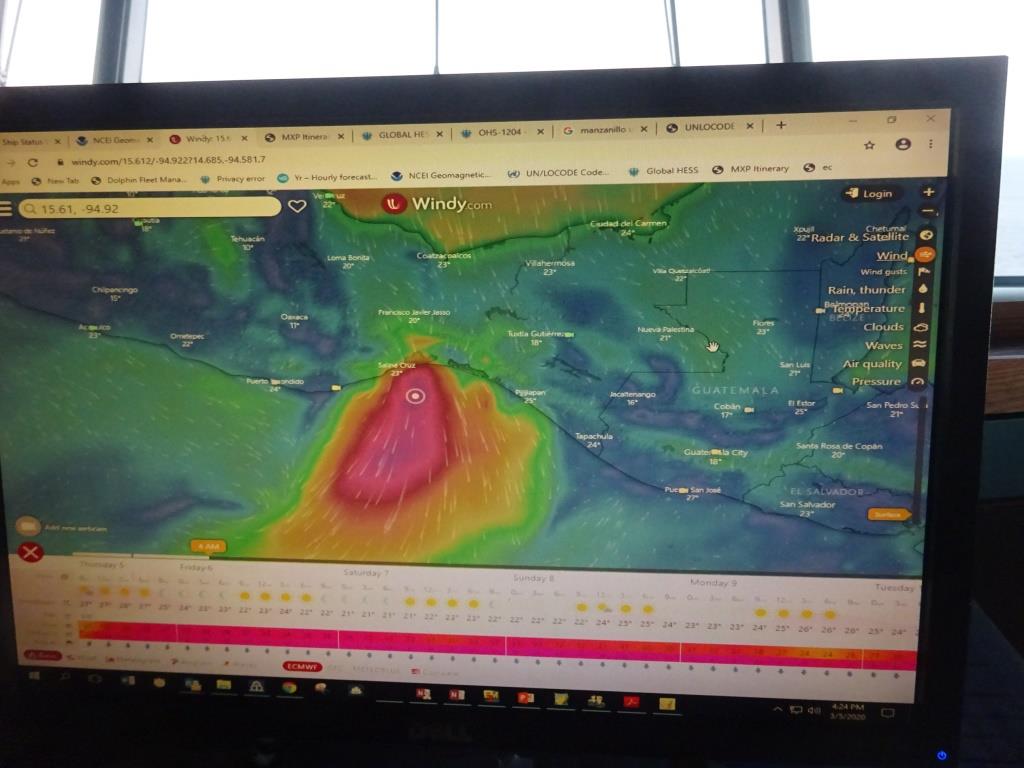 This is the wind flow  as  predicted since today at 10 am. local time.  All the wind is pressed through this hole in the Sierra Madre called the Chivella Pass and then spreads into the Gulf of Tehuantepec. As you can see it is angled towards the South West and thus an issue for Huatalco which is located just to the west of that red area.

So the mitigation of the problem that is faced by the ship is two fold. First we are going to sail closer to the coast, so while we still will have the wind, we will sail around the area where the waves have gathered so much momentum that the ship would become very lively. Then by angling the ship towards the wind, we will reduce the list of the ship while sailing through the storm. Our guests will not notice much list as the bridge will be ballasting against it to keep the ship on an even keel. 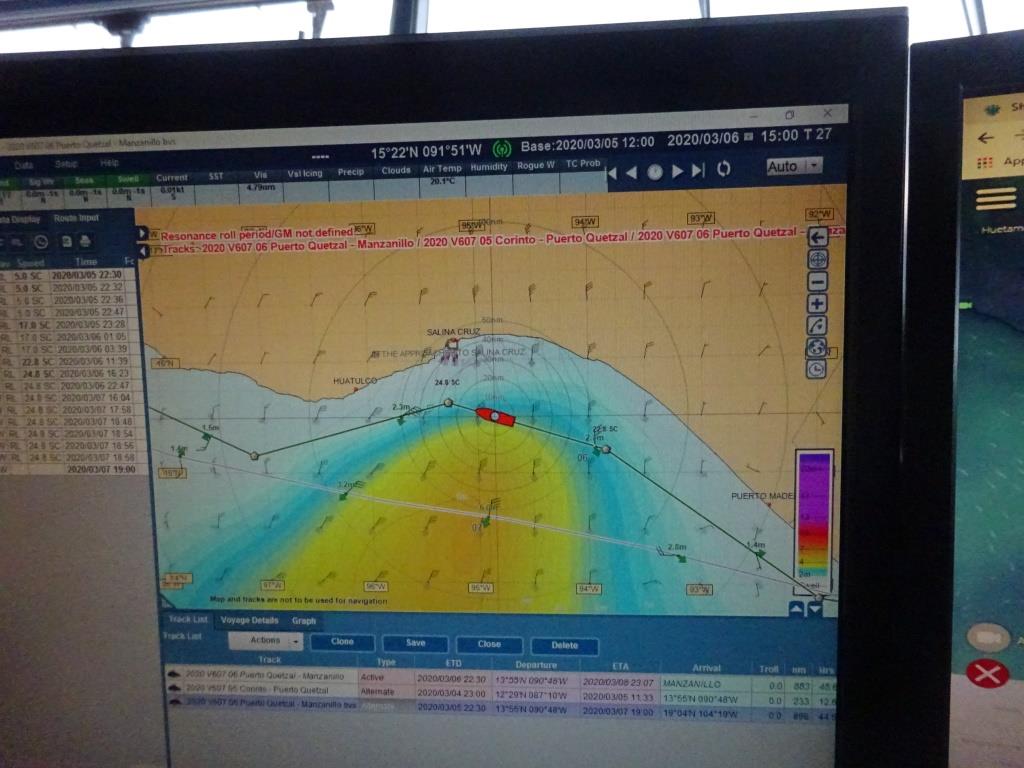 This is the expected wave height. The yellow bit is 12 feet  and then it goes higher. The Captains plan is now to stay in the green area where the waves are lower  and can handled very well by the Rotterdam without causing too much motion. While at the same time losing as little time as possible  for our journey to Manzanillo. The grey line through the middle was our original track. As you can see Huatalco is at the top left in the white. That  does not mean that here are no waves here. They are just so low that they do not affect the height of the sea. But  even 3 to 4 feet of sea waves running along the dock in a port can make for a very nasty experience.

Secondly, we have to deal with the port of Huatalco. If the main axis of the out flowing wind is due south or south east, then Huatalco does not notice anything. You can have a wonderful day there while 50 miles to the East it is Hurricane – Force – Mayhem.  But if the Axis of the outflow tilts to the South West, then the waves generated by this wind bounce into Huatalco bay. Then even if the ship could make it alongside, it would ride up and down the pier 4 to 5 feet. That is not safe for docking but also nobody would be able to get off the ship.

Hence the Captain made the wise decision to substitute Huatalco for Manzanillo. Thus tomorrow we will spend a day at sea and then we will arrive around 1 pm. On the 7th. at this new port of call.  The Captain has been making announcements about it since yesterday afternoon, to make sure that everybody gets the message but also understands it. And multiple announcements are necessary as we do not make announcements in the cabin, unless there is really something wrong. And in this case it is all about taking precautions with a phenomena that we are all very familiar with. As an longtime retired Hal Captain used to say: “if you do not prepare then you will get hit hard, and if you do prepare, then they will say “what is all the fuss about”.

Apart from Tehuantepec which we will experience around 10 am. tomorrow morning, fuss or no fuss, we should have a very nice day, as soon as we have left that area behind us. 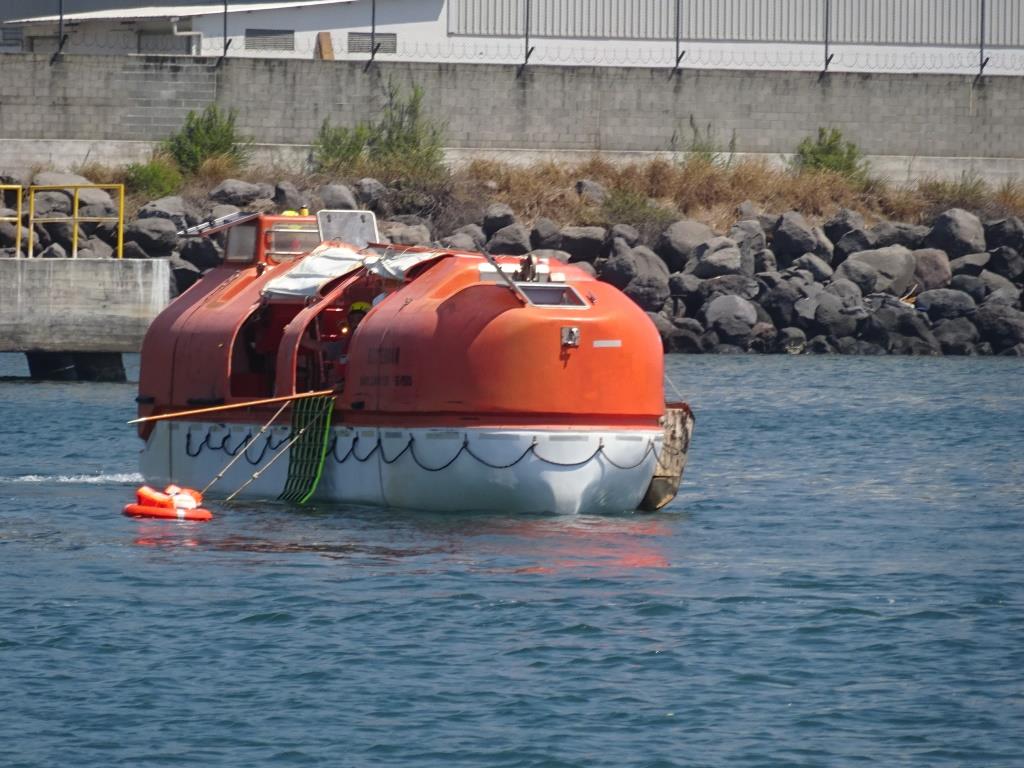 That is what we did today as well in Puerto Quetzal. A Man Over Board exercise (*). We train for this on a regular basis, by throwing a  dummy overboard and then clock the time from alarm given to pick it up and return back on board. Today we did it in 10 minutes which is a good time taking into consideration that we have to get the crew together and then lower the boat into the water, sail out, retrieve the casualty and then get the boat out of the water again. (*) To be politically correct it should now be called a Person Over Board exercise, but Maritime Law has not been updated yet so we still call it M.O.B.