This is one of the trickiest ports to get into. On bad days there is a long and deep swell running over the large area of shallow water outside the entrance which makes it hard to keep the ship steady, even with the stabilizers out. Then there are two turns while sailing in, and at the 2nd one, you can have current from 3 directions at the same time. Something that asks for careful planning. But the company is now coming to this place since 2011 with the cruise ships and thus we have a lot of experience to expect the un-expected. And there is always something.  Also today. With the Corona virus a concern of every health authority, Nicaragua has decided to do a special health check at the sea buoy before sailing in clearance is granted. And thus four doctors boarded the ship and had a discussion with the ship’s Doctor to see what the situation was on board the ms Rotterdam. Well we are completely clean, not even a little bit of Noro virus on board, and after a short time the medical quartet disembarked again and gave permission for the pilot to board. They themselves then continued with a visit on board the Seven Seas Splendor which has been following us since the Panama Canal. They were with us in Puerto Caldera and now also here in Corinto. (Maybe they do not know where they are going, so they are just following us? So I would not be amazed if they pop up as well in Puerto Quetzal)

While the local doctors were on board we had to wait before we were granted permission so we could continue.   If you then stop the ship, then it really starts rolling with all unhappy results of that decision. Thus the captain decided to make a full turn while we were waiting. With just enough speed to let the stabilizers to their job and without alarming the authorities about coming too close without the all clear. Once given we sailed in, with very little wind, and only two knots of current. That is the way we like it. With so little current you had better take advantage of it and swing the ship on arrival so it is docked nose out and ready for sea. Then it is much easier to get away, than having to swing while current and wind might have increased in strength. 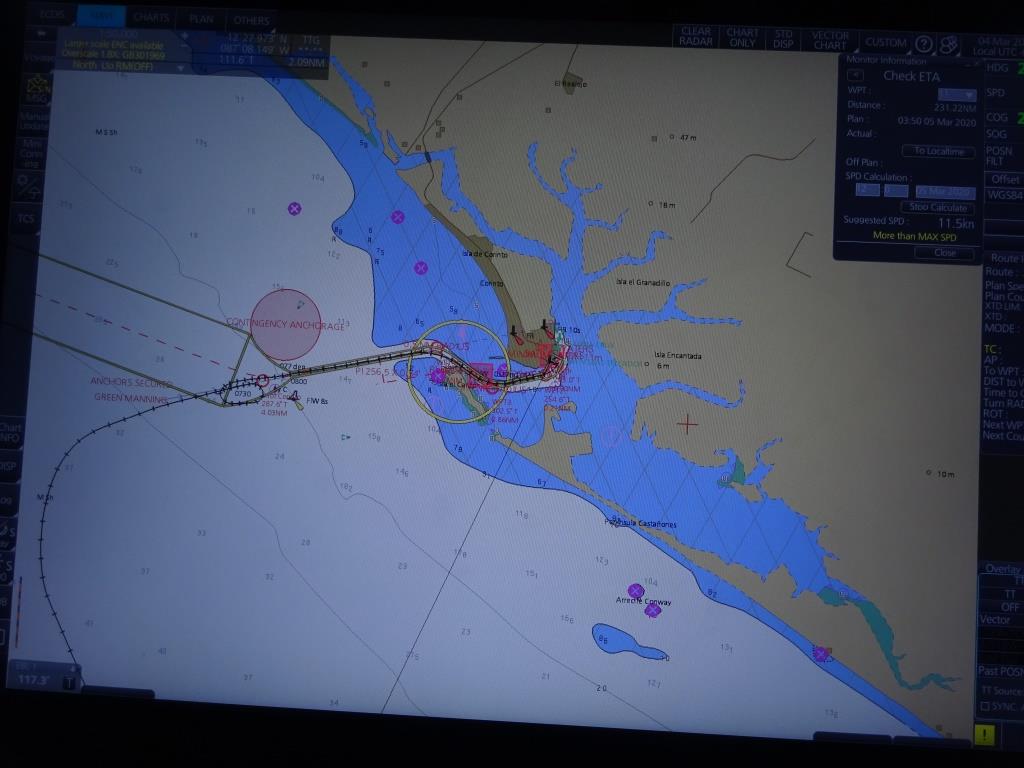 Our approach. See the nice doughnut the bridge team  made near the sea buoy while waiting for the pilot.

I have been coming to Corinto since 1979, when I was a cadet with the old cargo branch of Holland America. Our company had officially sold all the cargo ships to a Norwegian company in 1974 but all the people on those ships where ex Holland America Line and some of them were even more HAL than those still with the cruise ships. I had opted for the cargo side as I had to pass my 3rd year for my Polytechnic option of the Maritime Academy for which you had to maintain a journal. All of 1200 pages of densely typed projects and a few hundred photos. But containers do not distract you from your work, nice lady crew members on cruise ships do, so I joined Holland America when I had my license and thus had time to party without a burden on my mind.  But being cadet on a new container ship was great as you were allowed to do much more than on a cruise ship. Not so much liability, deniability, witnesses and legal beagles around. 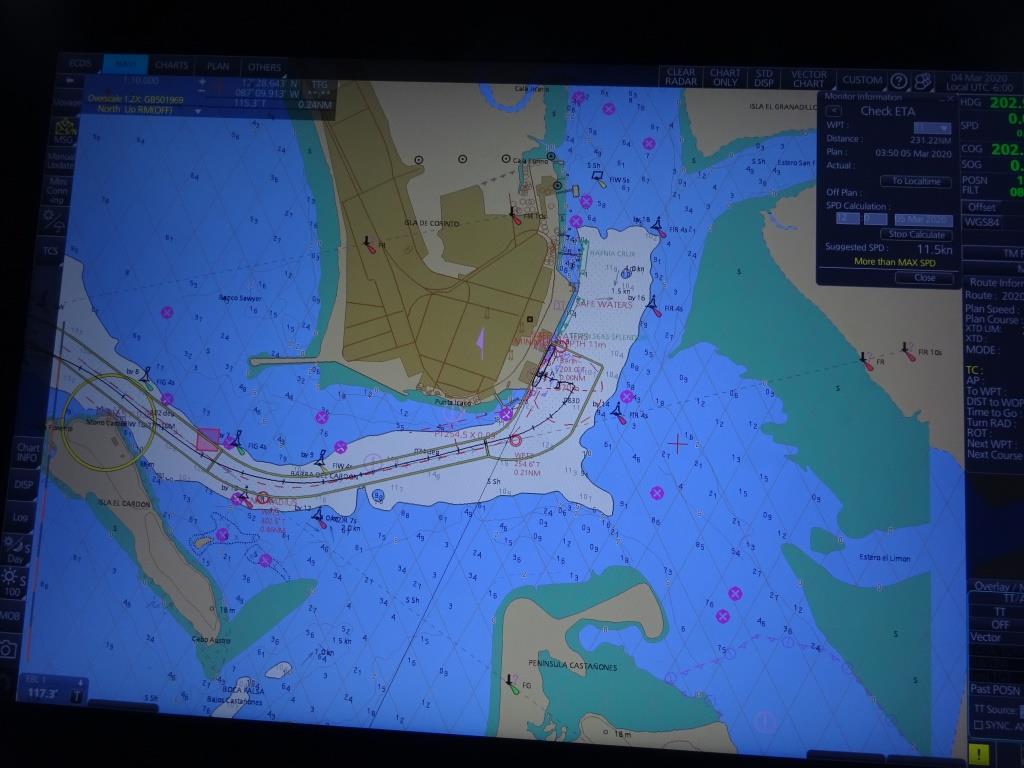 My first time here was when the revolution with the Sandinistas had just finished. Dictator Somoza had been replaced and a new government was being formed. Things were still very unstable and these revolutionaries were all over the dock and the port was at a complete standstill. Also, at least that was what I was told, the skilled labor was either in prison or  had been shot. So no crane driver for the large Liebherr crane on the dock and no service people to maintain the fork lifts and the container carriers. Hence on arrival the Chief Engineer and his team swarmed out onto the dock to get all the equipment going again and we as cadets operated both the ships cranes as well as the large shore crane.

The latter was my responsibility because the captain had figured out that I could read and speak German and this was a German crane. (Captains are very logical people) The manuals for the crane were only in Spanish and in German. So after an hour of reading I had found all the Emergency Stops inside the engine compartment (hence the reason the crane did not start) and had mastered the operating handles in the right sequence. All the time escorted by a Sandinista who promised me that he would kill me if I damaged the machine and the port supervisor who promised me his daughter if I got it all working again. (Neither happened). Then I started running the crane and after a day of instruction a local longshoreman had learned enough to take over. The next time we arrived, the port was more or less in operation again, and the guns were gone. 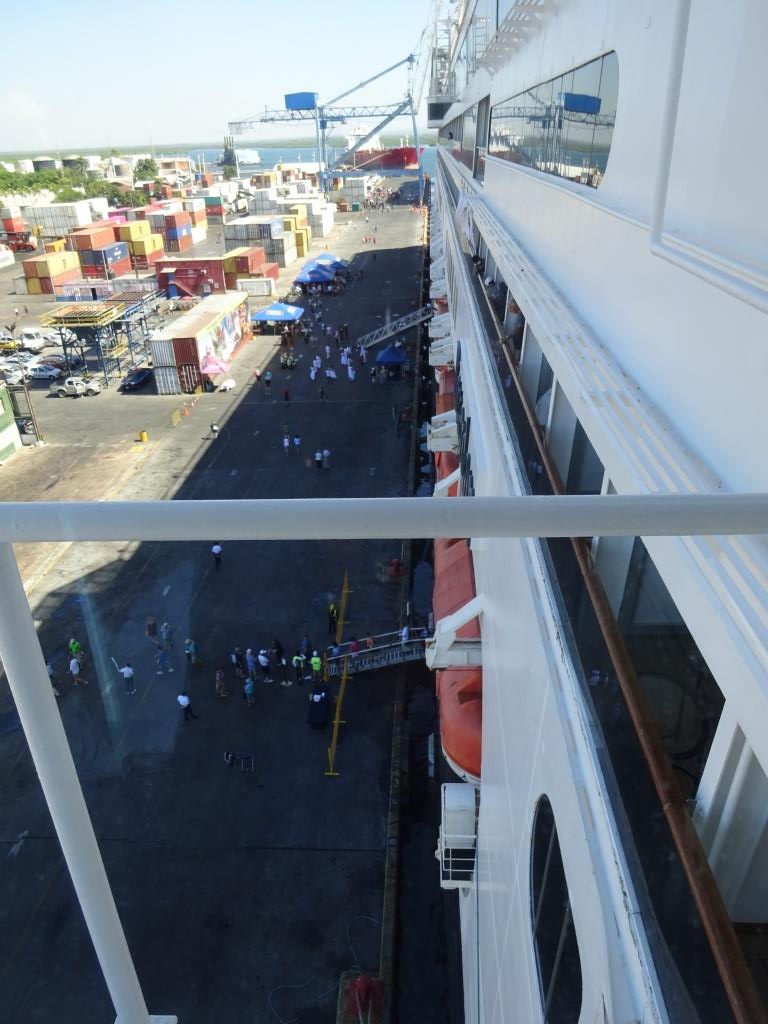 Alongside in Corinto. There is no cruise terminal so we are at the old cargo dock. When a cruise ship comes in, the container / cargo ship alongside is sent out to sea to wait until the cruise ship is gone again. Note in the distance the container crane, same one as in 1979. They say it has been broken for a long time now, so only container ships call which have their own cranes.

Tonight we will do a quick sail along the coast to just over the border and then we arrive in Guatemala, Puerto Quetzal. Here we will arrive early as we have a full day – flight- tour to the Maya ruins. Good news is, the cruise ship pier / pontoon has been repaired. Bad news is, it is going to be as warm as today. Sunny again 33oC / 92oF and hardly any wind. I am doing tender exams for the sailors tomorrow so it is going to be a warm day in the Tender.