We are sailing back the same way as we went to the East Caribbean, outside the Bahamas, in the North Atlantic Ocean and right inside the Bermuda Triangle. The sea is a bit choppy as Cape Hatteras has yet turned out another 3 day cycle special and this one did not go directly to the North East but more straight across and thus a bit more swell is reaching our area than was the case when we were going southbound.  We do not notice it very much but if you pay attention to the movement of the ship it rides as if it is going over a lot of very small bumps. No rolling, no pitching, just little bumps. Courtesy of this wave pattern mixing up with remnants of older wave patterns. Overcast skies and rain showers made for a day that was not “very exciting” outside. But the good news is that, tomorrow is going to be a sunny day again and today was the day to explore the ship as it is the last sea day of this cruise.

With a seven day cruise, the ships company always struggles to fit everything in of what is part of the standard Holland America Line offerings for the guests. So the Hotel department staff is running around as “chickens without a head” but in this case “with a head” as the operation always runs smoothly and like clockwork but it is very frantic behind the scenes. 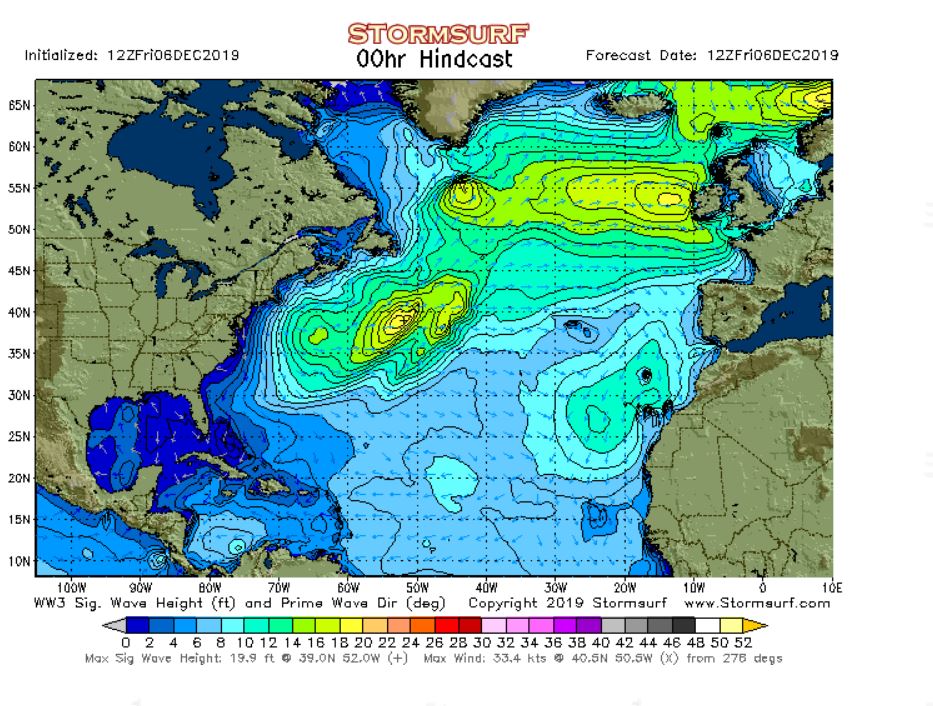 The wobbly North Atlantic. No heavy storms anywhere (although 20 feet of waves  still makes the ship rock) but  very widely spread wave patterns. We are just on the edge of medium and light blue and thus the waves are fairly low. But they are confused and mixed  up with older systems.

One of the high lights is the Mariner party and luncheon which is set up in such a way that only those who are Mariners notice it as they get an invite to attend. Holland America has the highest repeater rate of the cruise industry and thus there is always a greater number of members on board.  The only times where I have seen relatively small numbers is during Alaska Cruises as often we get lots of new – first time- cruisers there; who then automatically turn into Mariners during their next cruise. As most often their first HAL cruise is not their last one. I remember that I made a cruise with the Veendam to Alaska and we only had one medal holder on board and about 50 repeat guests, the other 1100+ were all new to the company and mostly new to cruising.  So that turned out for me into a very small Captains table with a single couple to entertain.

The current form of the Mariners Society has been around since 1971 when they started keeping detailed records with I.D numbers to track the number of cruises each guest (then still called passengers) had made. Before that time there was also a sort of tracking system in place but I am still trying to find out how that exactly worked. The oldest record I have been able to un-earth is a mention in the memoirs of Captain Haagmans (See on my website) where he writes about his uncle who was the organist of St. Patrick’s Cathedral in New York around 1900. When this man made his 50th. Crossing with HAL all his on board expenses were paid and when he made his 100th. crossing, it was with a free fare.

Then through the years, here and there tidbits of information surface in newspapers and in company press releases about passengers reaching mile stones. Often travel agents who made frequent crossings as part of their work and I assume that Marketing or Ticketing kept a register of these people but I have not yet found detailed records of how this worked. During the February 1953 storm and subsequent flooding of the western part of the Netherlands, Holland America lost a part of their archives when the cellar in Rotterdam head office flooded and many things were lost and when the Holland America Line Offices merged from Rotterdam, New York, Stamford into Seattle. Nothing unusual as every historian can tell you that the 70’s and the 80’s were not the years when the focus of the Nautical Industry was on looking after their heritage. Everybody was busy with survival as things were changing very quickly in those two decades. Plus you need a certain mind set to see what “might not be valuable now, but will be in the future, especially in a Social Economic contest”.  Hence I am tirelessly collecting, filing and cataloging for future generations. (One day the Captain Albert Archives will be world famous ……some where….)

I am of course a prophet for my own company but when my wife and I sail with the competition we always try to get in the “repeater parties” of the other cruise companies to see what they are up to. And if I compare what they do to what we do then I can only say Holland America is looking pretty well after its return guests.

For those of you who are interest in the tiles that we give to the guests as part of the Mariners Society, we also have a collector who specializes in this and who researches the background of all that the company (or other company’s in relation to HAL) has issued through the years.  According to the website Hal has issued 325 different tiles in its history. https://tonrijppaert.nl/en/mariner-collection/

Tomorrow we are in Half Moon Cay and the weather forecast is good. Partly Cloudy skies 78oF / 26oC with a gentle breeze. And 1% chance of rain. I would love to see that 1% coming by…….  As I have never seen a 1% cloud in my life before.