It takes two days to sail to our next port of call, Cabo San Lucas, and we have to sail at a fair clip as well. Just over 18 knots to make sure we get there on time. I think a lot of people do not realize how big Mexico really is. Maybe not that wide, but it is long. Especially in Europe the common knowledge is that Mexico is located under the USA; Mexico City has millions of inhabitants, it has lots of Mayan ruins all over the place and some very nice places to go on vacation. But not many people can put a real finger on the fact that it takes quite some time to get from the one end to another. 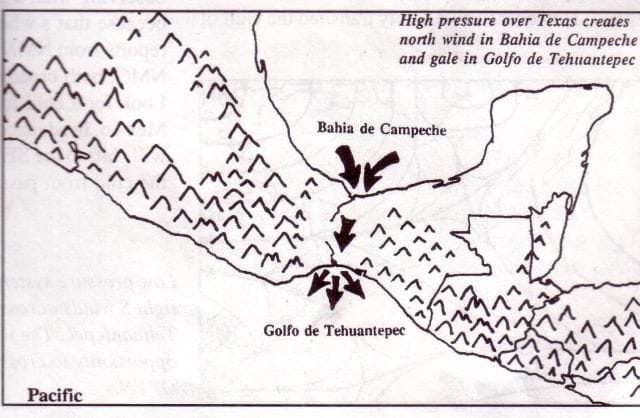 That gap in the Sierra Madre which is causing all those windy problems.

Last night we had our first Mexican adventure, the Tehuantepeccer wind.  When I checked the weather forecast yesterday afternoon it was unclear if it would happen as the angle in the Gulf of Mexico for the wind there was not completely right but in the late afternoon things shifted just a bit and the wind started to blow through the gap in the Rocky Mountains /Andes called the Sierra Madre range.  Then the question was how much were we going to get? The tehantepec wind can vary in strength from 40 to a 90+ knots, and the closer you are to the coast, the more wind you catch but also the less waves it can whip up. 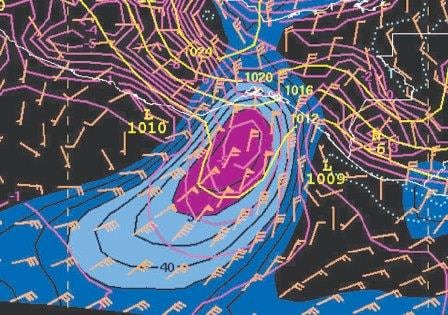 An example weather chart, clearly showing the outflow of the wind. (Courtesy NOAA.org)

For a captain who wants to keep his ship straight up and do not let it wobble too much, it is worthwhile to try and find out how strong the wind is going to be.  Although you cannot predict with complete accuracy, you can have a fair shot at it. Normally you take the predicted wind for Salina Cruz and then add a knot for each mile you are out in the open, until about 50 miles away. Salina Cruz is a tanker port which sits under that wind gap in the mountains. As it is located below the gap it does not get all the wind. Most of it blows higher up directly into sea.  The Salina Cruz weather forecast gave 25 to 30 knots by evening, we were 20 miles away from the coast and thus we could expect 45 to 50 knots of wind. And that is what we got. The wind topping just 50 knots when we sailed through the middle part.  If well prepared (all tanks on the wind side full and lee side empty) an S class ship can compensate to about 50 knots. And thus we did not list. 20 miles of free wind is not enough to build up strong waves and thus we did not move that much either.  If the list becomes uncomfortable than we can do a bit of zig-zagging and keep the wind under an angle. An Angle in relation to the super structure so the list decreases again. But that costs time and speed and we were lucky last night that the Veendam ballasting capabilities were a full match for the wind.

The 2nd very important thing was the one hour back last night. We are now on West coast time and ready for San Diego.  Time zones were invented to make sure everybody got a sunrise and sunset at a workable time. At least everybody, except those above & under the polar circles, they get all or nothing.  Because we go in jumps of one hour we never get it completely steady for each day and thus the sun can rise a lot earlier on board than would be expected. With two days at the sea, we had three nights to give this hour and the Captain decided that after all these hot and busy ports it would be nice for everybody to have a lie in so it was done last night.

There is this moment between dark and light which is the sun rise and sun set as the changes from light to dark, the twilight zone. At sea we have several twilight zones. More about that tomorrow.

Neptune has not yet decided to rock the boat, so the weather of today sunny with a slight haze and flat calm waters, with a low swell is set to continue to tomorrow. It was nearly wind still today and thus the ship could produce its own relative wind, giving a gentle breeze blowing over the deck.  A near perfect day for cruising.