The good weather continues and we had another day in paradise, right here on board the Veendam. Today there was a lot of wildlife around and those who frequented the outside decks could have seen, dolphins, seals, all sorts of birds and turtles. We even had a hawk hitching a ride on the bow. Normally we do not see hawks in open waters but we are less than 20 miles from shore so maybe he/she flew out a bit too far and used us as a resting platform before turning back again. Turtles (or tortoises) are more common and I am always fascinated by them. We literally see hundreds of them and in the beginning I was always afraid that they might be hit by the ships propellers as they are not the fastest of swimmers. 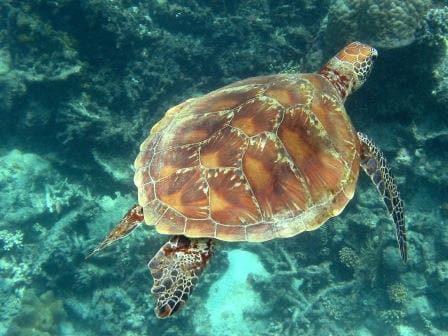 But through the years I kept an eye on them and it looks like that we, at least the bigger ships, cannot do them any harm. With their shields they lay on the water as a cork and they are simply washed away on the bow wave. They might not enjoy the sudden swell rolling by, but when caught they are pushed away a considerably distance. When I follow them I normally seem them 100 to 150 feet away from the ship by the time the stern passes them and they are just bobbing up and down the waves created by the ship. There are a lot of turtles out there but we always only see one sort. A big brown shielded version in size anywhere between 30 and 80 centimeters. (As guessed from the bridge wing)

Tomorrow we are in Cabo San Lucas and then we will see more wildlife in the form of Pelicans and seals which are normally present in large numbers around the port entrance. With so many sport fishermen going in and out of here, there is a fair chance of an easy meal. Then after the departure I have high hopes for whales; some who are here all year around and some who are on the way down from Alaska, as not all Alaska whales go to Hawaii. 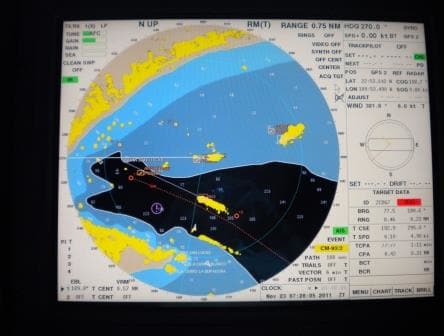 Cabo San Lucas has three anchorages. This radar screen shot shows anchorage 2 in the center, we will be all the way to the left. In that direction is the ship/echo heading which is following the dotted line.

Cabo San Lucas is a tender port and the preparations for tomorrow started already a day before. The tenders need to be made ready and the agent has advised us what to expect. We will be the only ship into tomorrow so we can go to anchorage number 1, which is the closest and also the best sheltered from the ocean swell. That saves a considerable time and less tender distance to cover.

Then we have to prepare the operational side of the tender operation as we will be using our own boats. Most of us have all been there but still we take the whole deck department with all sailors and officers through a tender briefing to ensure that the operation is safe but also as efficient as possible. We are in port from 07.00 to 14.00 hrs. which is a short period to get 1200 guests ashore and also back. (Unless a lot of the guests are not going ashore; most have been here already before and will have bought the T shirt) 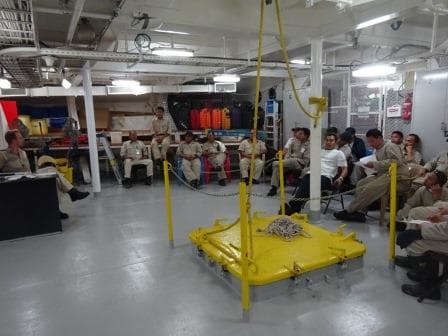 Bo’sun and sailors assembled in the Bo’sun store listening to the wise words of the First Officer on the left.

Thus today all the troops gathered in the Bo ‘sun store and the First Officer gave his briefing. Route and Safe navigation (the area is normally full of six-pack navigators or worse), Emergency tender procedures, Safe Working Practices, docking, undocking, standby locations, checklists, etc. etc. That takes roughly about a hour, as we want to make sure that there are no glitches. And if there is one, then it is at least not caused by something we could have foreseen.

We will start approaching the anchorage by about 05.30. Have the hook down by 05.45, send our first tender ashore at the same time to collect the officials and as soon as those have cleared the ship, start our tender operation. Hopefully we will be in full swing before 07.00 hrs.

It will be a hot day again tomorrow, with temperatures in the low 80’s and a lot of sunshine. If I was a guest and I had already bought the T short, I think I would prefer to stay on board. I will be up and about early. First to see the anchor operation, and then monitor my school class in helping operate the tender service.

I will continue my story about sunset/ sunrise after Cabo.

Captain Noel O”Driscoll under Current captains and their schedules.