We approached Puerto Quetzal by 09.00 in the morning and were docked shortly after. That shortly after was achieved by scooting straight in, instead of swinging around and docking nose out, something we normally do during early arrivals.  The call at Puerto Quetzal is built around the fly tour to the Maya ruins. The airfield that is used is day light only. The plane has to take off and land during day light hours as the airport has no night landing facilities.  Thus when we have an early arrival, the captain has plenty of time to swing around in the dark and still dock on time without endangering the timely take off of the plane.  Normally we have it that well organized that the guests are sitting in the plane and 5 minutes later there is Twi -light and as soon as the pilot can see the end of the run way, off he goes.  With a day light arrival, it makes sense to get the tour on the road & off the ground as quickly as possible, hence going straight in and turning on the departure. 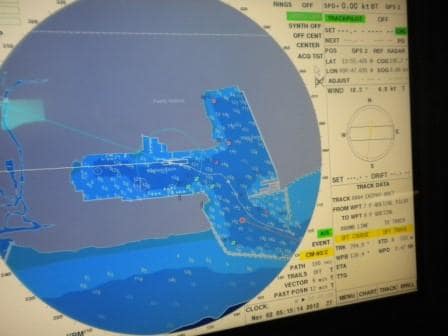 The port of Puerto Quetzal is in an L shape, where two rivers meet and have a joint exit to the sea. Through the years a complete port has been dug out and in one leg of the L is the container port and in the other leg a tanker port and a cruise terminal.  The port is protected from the ocean swell by two breakwaters and you sort of zig zag through. Not completely, you can with making a little curve, sail in a fairly straight line to the cruise terminal dock.  This is a floating pontoon, so it goes up and down with the tides and thus with the ship and the gangway is always in the best position. 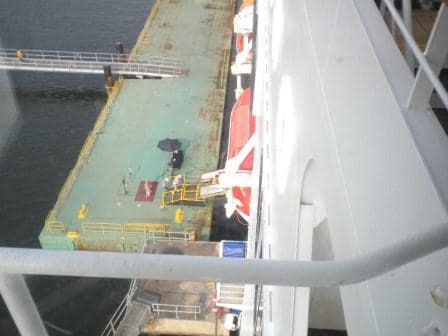 As the breakwaters do not completely protect the port, at least not the area where the cruise terminal is located, there can at times be a low swell running in. Not a problem unless you want to lower lifeboats. And I was going down with the boats twice today to do the practical part of the lifeboat training class.

We managed one group and then I considered it too dangerous. The swell was building up to 2 feet and that means that the lifeboat, when coming back, is also going up and down under the blocks with amplitude of 2 feet.  Lifeboat systems are designed to release lifeboats as quickly and safely as possible. They are not designed to do that the other way around. Hooking in the Falls in which the lifeboat hangs is a hairy affair when there is swell and thus I prefer to do it safely, when the sea is calm. We will try again tomorrow in Puerto Chiapas.

While I am on board the ships, there is always the challenge to find an empty cabin for me. We have service staff cabins on board but they are always full, with one or the other technician coming for a repair, service or upgrade.  It means that I am parked somewhere in cabin that was not sold (seldom) or when there is a no- show (with the average age of our guests a common occurrence). So even when the ship is full, there is space for me somewhere. It means that I am becoming an expert in Holland America cabins and locations. From those in the depth of the dungeons to those at the lofty heights of the Suite Decks.

I personally prefer an inside cabin, as I can then sleep whenever I need to, there is no noise coming in from the outside and as there is no sunlight shining on the window/porthole it is easier to maintain a steady cabin temperature without having to fiddle all the time with the A.C. and then wake up freezing in the night, when the ship cools down. No, a good bed and a good shower and I am a happy camper but I am working.  Of cause when sailing with my wife on vacation that changes as she does like a window and a much larger cabin with a balcony or a suite. 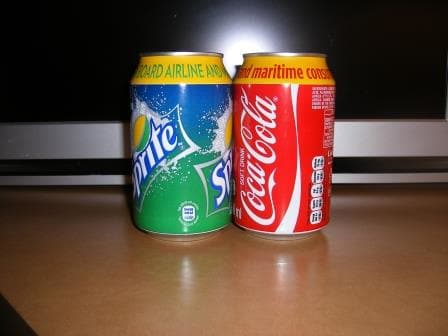 See the yellow rim on top of the cans

It is interesting to follow the cabin service and the hotel logic behind it. I have a vast array of soft drinks in the cabin and if I drink one, the next morning at 0900, a new one pops up to make the total the same again. One thing I would like to share with you; is that recently we have gotten Coca Cola cans on board with the label:  Only for Airline and Maritime Consumption.  I have never seen that before. Special Cola and Sprite for those who travel.  I wonder if they put something in it, which makes you less fast air sick or sea sick?

Tomorrow we are in Puerto Chiapas, Mexico, which is just over the border from Guatemala. The weather looks the same again Hot and sunny.  The hurricane that I wrote about a few days ago never materialized but now we are expecting the Tehuantepeccer wind to blow. How strongly is something we will find out tomorrow evening. And behind there is something else brewing…………………….