Puerto Chiapas is located just over the border from Guatemala and thus located in the extreme south west of Mexico.  The mountain ranges of what will eventually become the Rocky Mountains can be seen in the far distance but this area is what I would call flatlands. Rich soil which is cultivated extensively with Fruits and Vegetables. Even the pilot has a mango farm when he is not occupied with getting cruise ships in and out. A river that flows through this fertile land has given rise to the port of Puerto Chiapas. The good thing is that there was already an established estuary; the bad thing is that it is constantly silting up as the river brings a lot of brown soil towards the sea. As there is hardly any flow in the river, the soil has time to settle right in the entrance of the harbor.  Because of that there is a dredger permanently in residence to clear away any silt banks in the entrance which are constantly forming, especially after a few rainy days upstream. 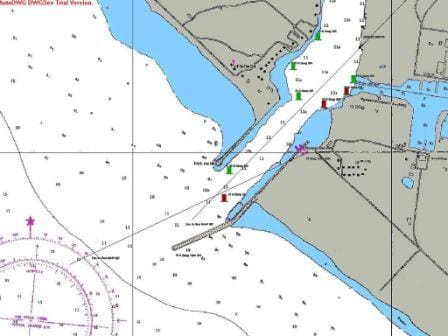 Then there is one more challenge and that is a challenge that gives captains a real headache: Swell. The entrance of the port is NE/ SW and if the ocean swell is in the same direction then that swell builds up the moment it rolls over the silted areas. A wave goes up and goes down and that means that if the wave goes up, it adds to the room you have under the keel (What we call that UKC or Under Keel Clearance) but when the wave goes down, it reduces the available water depth with whatever height the wave has.

As we had some waves yesterday in Puerto Quetzal the big question was what is the direction of that swell at Puerto Chiapas? Well the direction was good. It ran across the port entrance instead of into it. Thus between the breakwaters there was no swell and thus there was the regular water depth of at least 10.5 meters under the keel. Take the draft of the Veendam of 7.8 meters and you have at least 2.7 meters left under extreme low water circumstances; so always much more during normal days.

That made the Veendam zip into port without any hindrance followed by a happy warm day alongside.  Navigation wise it was less of a happy day. The Tehuantepeccer is blowing and that means that tonight there will be a lot of wind around the ship. As it is a land based wind, it generates a lot less swell than a storm in the open sea. It can go up to hurricane force winds but normally it blows between 50 and 60 knots which is still a heavy storm but it does not feel like it as the ship hardly moves. 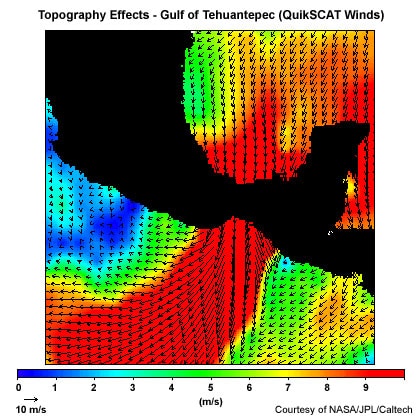 Red is the wind flow and black is land. The darker the red, the stronger the wind

A Tehuantepeccer starts to blow when a high pressure system forms in the lower part of the Gulf of Mexico near the Yucatan Peninsula. Then if you have a low pressure situation in the Pacific an air flow starts to go west. Right between Puerto Chiapas and Huatalco there is a gap in the mountain ranges on top of the port of Salina Cruz. That gap creates a funnel wind and what has started out as a fresh breeze of 20 knots is suddenly being amplified into a severe storm.  The further into the Pacific Ocean, the more swell it generates. To avoid being affected by the swell, the ships creep closer under the coast and that is what the Veendam will do tonight. So watching the anemo meter if the wind force goes up and up, the captain will change course closer and closer to the coast so the ship will not be pushed over by the wind and be rocked about by the swell. Once past the vortex the ship can then angle away bringing the wind onto the stern and set a safe course for the next port.

We have a Tehuantepeccer so often that dealing with this phenomenon is pure routine and as long as the guests stay inside there will be no danger to them whatsoever.

Something more unusual is the fact that this wind is feeding the creation of hurricane Vance, that is churning off the coast further up. We are safely behind it but the question is where will the hurricane go?  The Bridge Team will be keeping a close eye on that one in the coming days.

Tomorrow we are in Huatalco de Santa Cruz. This port is normally not affected by the Tehantepec winds, but it can be affected by swell that bounces off the coast and then runs into this beautiful harbor.  We will see tomorrow morning. We are expecting another hot Mexican day and if the local wind is not from the sea, cooling things down, then it will be a very toasty day as well.