The Tehantepeccer was present, very much so.  Around midnight it started to blow and by 2 am the ship was in the middle. As it is a funnel wind, it was quiet again by 4 am when the ship sailed out of the funnel.  The peculiar thing is that the wind whips up to 50, 60, 70 knots and the ship remains as steady as a rock as it is a land wind. As long as the ship is close to the shore, the waves cannot gather any momentum and it is just very stormy but without the motion that makes a storm so bad.   Although we have the weather forecasts, the big question always is where the vortex is and what the angle is. The more the angle is towards the South West, the bigger the chance that Huatalco can be affected. This time the wind stopped around 04.00 in the morning and with still 3 hours of steaming to go there was a fair chance that the waves would not curve into Huatalco bay.

They did not. It was nice and calm. And thus the Veendam could happily dock at 08.00 hrs. in the bay. There is room for 2 ships at the pier but we were the only one and the guests had the whole little resort to themselves.  Since Acapulco is out of the question, this is my favorite resort on the West Coast of Mexico.  Acapulco was always wonderful but now it is suffering from the drug wars in Mexico and it is not really a safe place. Even downtown seems to be affected and thus the cruise ships stay away. It must cost the locals a lot of money and those who are losing out are most likely not the ones who profit from the drug trade. 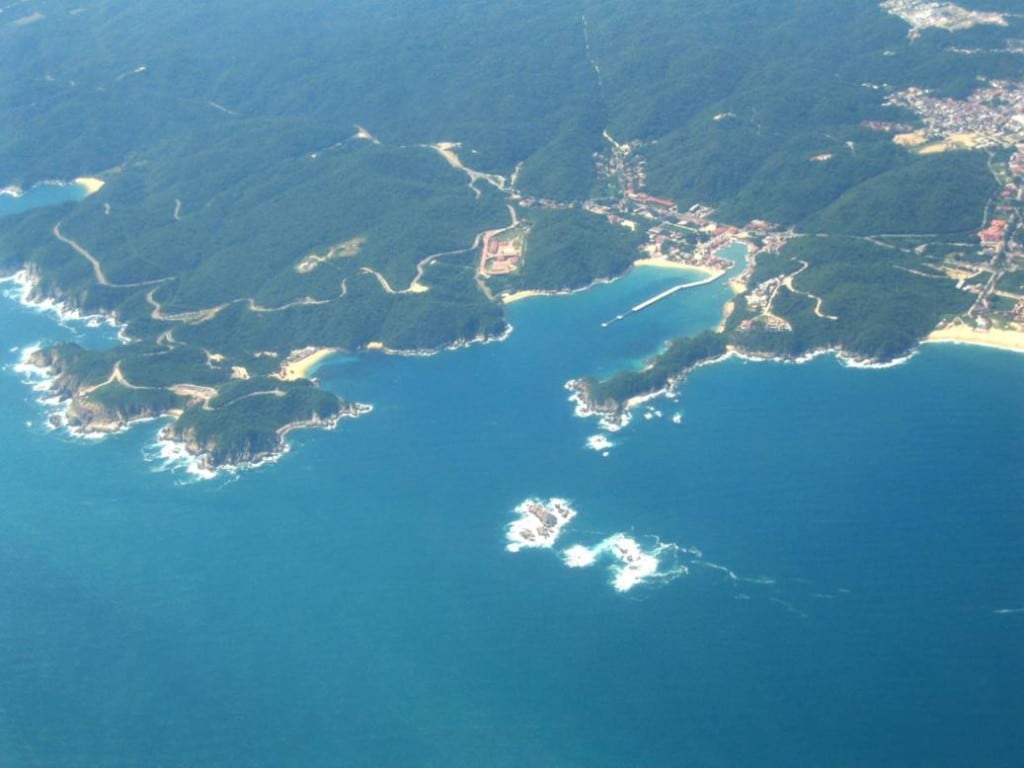 The only issue with Huatalco is that it is enclosed on three sides. Only sea wind can get in and if there is no sea wind then it is very warm in the bay. Very toasty so the speak.  And today was a very warm day. I felt sorry for the Mexican soldiers who were guarding the ship. While in Mexican ports there is always a navy boat around the ship and most of the time it is an open boat. Even when you are used to warm weather, sitting there in army fatigues with the sun belting down upon you cannot be much fun. At the same time you also get the reflection from the water, a double whammy so to speak, making it very warm.

By mid afternoon it was time to leave again and our next port of call is Puerto Vallarta. Now hurricane Vance is becoming more and more important. It is still sitting there out in the ocean and it is not moving very much. The predictions are that Vance should move to the mainland, somewhere between Cabo San Lucas and Puerto Vallarta. Those are the predictions, as that is what most storms do here. But Vance is not really moving and that means that there are other options.  It could move to open sea, it could just blow itself out, and it could move a bit north over colder water and loose intensity. Everything is possible. We just have to wait. The big question is……………….what is Vance going to do ?? 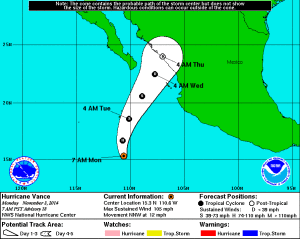 The most likely path, based on previous patterns, but by no means certain