Sailing down to San Juan from Grand Turk Island is one straight course once you have cleared the Turks and Caicos Islands.  You keep this course until 3 miles north of the entrance and then turn to 181o which are the leading lights. The most important happening is, whether the pilot will join in open sea or will join in the lee of Morro Castle. The San Juan pilot boat is seaworthy but not made for boisterous seas, nor do the pilots have any inclination to get sea sick. We like it that way as it is much safer to board the pilot inside as you can main your preferred approach speed of 12 – 14 knots without having to slow down for the pilot and then speed up again once he/she is on board.

What makes me write this?  Well my team was this morning on the bridge to observe arrival. Captain Rens van Eerten had set them a challenge. The one who writes the best approach – voyage- plan, will have that plan approved and adopted and next cruise it will be used to sail into the port. The winner will give the orders and with the captain as an approving filter between the winner and the executing bridge team these orders will then be carried out. Heady stuff when you are just starting out.

This morning we went through the whole arrival sequence and I pointed out where I would ask the nasty questions a captain would ask to test your knowledge.  Most items they had already under control, the rest was noted down for further incorporation.

As mentioned in one of my previous blogs, San Juan has officially 4 docks. Numbered from West to East. Number 1 takes the small cruise ships, Number 2 has been gone a long time and is now only a small ferry pier, Number 3 takes the mega liners such as the Oasis o/t Seas and dock 4 takes anything which fits alongside.  The Westerdam docks standard at 4 West and with our length of 960 feet we fit in with still a little bit of room to spare.

While coming in, I was thinking about when I came here in the 80’s and 90’s with the N ships. They always docked at Pier 1, preferably at the East Side, so we could let the wind blow us against the dock. The N ships had very weak thrusters and going against the Trade Wind blowing straight over the pier did simply not work. If I had to dock at the west side then I would wait until the ship for the east side had arrived so I could come in using that ship as a wind breaker. 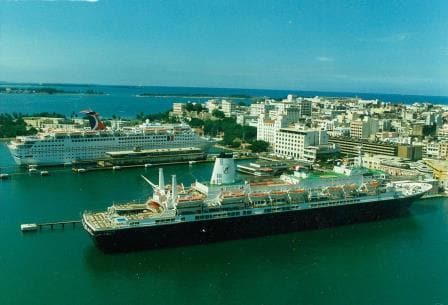 The N.A (III) docked at the old Pier 3 East side. A Carnival ship is docked at 1 West.

The amazing thing which crossed my mind was that all the HAL ships from those days still sail, except for the ss Rotterdam (V) which is now a museum ship, but the rest Noordam, Nieuw Amsterdam and Westerdam eventually all ended up with Thomson Cruises. This is an English holiday company although it is part of the German operator TUI which is part again of Royal Caribbean. Thomson is what we call in England a “package holiday” company providing a lot of all-inclusive vacations both ashore and on the ships. Quite often wine and beer are included as well. (Except premium spirits of course) In the States they would call the product “mass market” such as Carnival Cruise Lines. I call it “Bob the Builder” cruises. Not meant in a negative way but marketed towards hard working people who go on a cruise and want to enjoy themselves without any fuss. And they are very successful so our old Hal ships keep going. 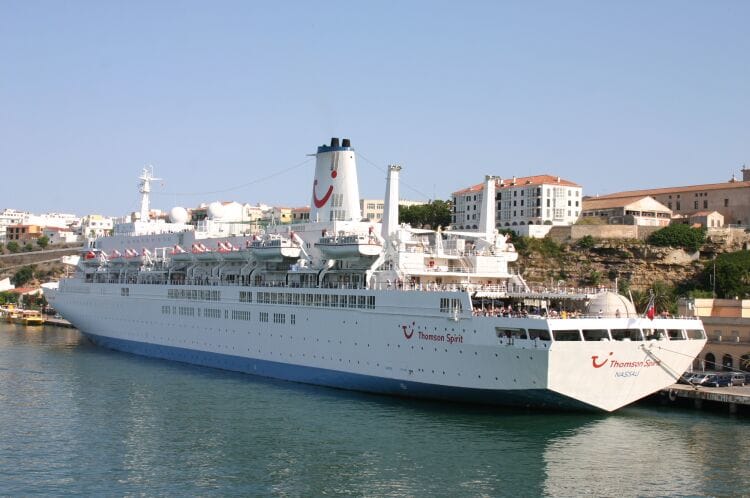 The Thomson Spirit ex N.A. III. Seen here docked in Mahon, Menorca. Not much changed except for the hull color.

The team spent the afternoon exercising with the lifeboat. Today it was bringing the lifeboat back under the fall blocks again for pick up, so they know how to do it, and tomorrow they have to talk the lifeboat back while sitting next to another driver. Something they will have to do in real life as well as it is the only way of training new lifeboat commanders. Communicating is not easy and the results are sometimes quite funny. I once ended up on the other side of the harbor when we did the first run. The trainee “instructor” was sitting with their back towards the bow, facing the driver and got port and starboard mixed up all the time.

We sail tonight at 23.00 for Charlotte Amalie, Crown Bay, St. Thomas. We will be docked by 07.00 hrs. ready to send 1900 eager shoppers ashore to empty out their wallets. The weather looks reasonable, chance of showers and a warm day with 83oF and 29oC. It might be the case in the days after as well.