Because the nights are getting longer we arrived in the dark at the Westside of St Thomas although pilot time had been set for 06.00 hrs. Only a few weeks ago we arrived at the same time and it was still full daylight. Now we only managed to dock during daylight as the sun slowly rose above the horizon just before 07.00 hrs. Departure in the dark is not much of an issue but arrival is preferred during day light. Not especially for the navigation but for the docking procedures. It is simply easier to see where the lines are going, if the linesmen ashore have caught the heaving line and if the mooring rope is sitting nicely on the bollard. Although the docks are normally floodlit during the night, the lamps are not always specifically aimed at the edge of the pier, berth or dock, where our interest lays. Quite often the design is to spread light over the dock area and not necessary over the rim of the dock where we have the bollards and the fenders. Thus we prefer day light.

The whole team was present this morning at 06.00 hrs. to observe the Bo ‘sun and Sailors in action during the docking procedure and this evening  my five students will let go all the lines by themselves and operates the winches etc. It is the next step in becoming proficient on the mooring deck. My task will be to ensure it all happens safely but also to keep the sailors away from helping. I have two female officers among the five and somehow the sailors find it difficult to let the two handle the ropes and do real sailors work. 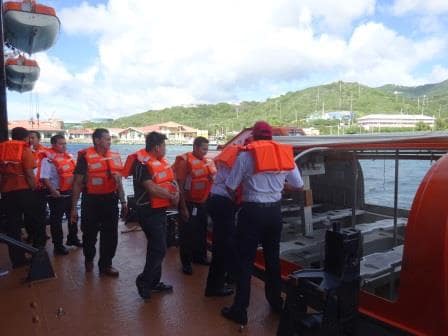 The lifeboat docked at the tender platform and the Diningroom Manager (lifeboat commander) is starting the embarkation process.

We had another interesting item today, something the guest seldom sees.  All guests who stay on board in port during a drill will have come across our training drills. Either by announcement or by being removed from the deck area where the drill is taking place. Something the guests do not see is the lifeboat loading exercise. Filling the boat up with a full complement; as we do this while the lifeboat is in the water.  Our winches are made to lower a lifeboat with 150 people on board into the water but they are not made to hoist 150 people back up again. Thus we park the lifeboat somewhere and march 150 crew into the lifeboat and train the commanders in getting everybody seated in such a way that the 150 really fit in. this exercise was an initiative from the cruise industry itself under management from the CLIA. (Cruise Lines International Association). 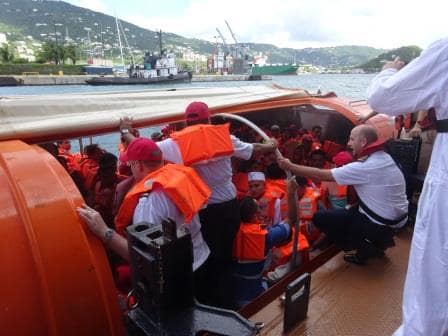 “Are you all having a good time ?”. The Training Officer giving some extra instruction.

It is a valuable exercise for the lifeboat commanders as this would not be easy to do in a real emergency. The lifeboat could be filled to capacity if all beds on board would have been sold (which is seldom the case) and then everybody has to sit exactly in the assigned spot, for the loading of the full complement to work. Normally a lot of our upper /bunk beds are not sold and this would provide some extra leg room in the boats. But we could have a full house and to ensure we park all 150 occupants in the boat, there are 150 black spots marked in the lifeboat so everybody has a little place to sit.

Maritime law, SOLAS, requires a lifeboat to be in the water, fully loaded, in 30 minutes. The clock starts ticking the moment the Abandon Ship alarm is given and it stops ticking the moment the lifeboat sails away from the blocks. That does not give us  much time and thus a good training here is of the essence. Today we did it in 20 minutes but that was including getting some stragglers and prima donna’s in who really did not want to sit in a warm lifeboat. Not counting those it would have been 15 minutes and that is a good time. Leaving 15 minutes for getting everything in motion including swinging out of the boats. Lowering only takes 30 seconds and this final action has little impact on the total time.

Tomorrow is a sea day and it might be a wobbly one. A windy system is coming towards the area, or at least close to us, and it might result in a similar day at sea as we had last cruise. But it all depends how the system develops overnight and where it moves to.