So with the road getting smoother and smoother the good ship Westerdam made its way to Grand Turk Island and was docked by 08.00 hrs. . We shared the berth with the Carnival Sunshine which was originally built as the Carnival Destiny and the first 100,000+ ship for Carnival.  She is easily recognizable as she has an enormous water slide behind the funnel. I do not know if the other Carnival ships have them the same size but somehow with this ship it is really an outstanding feature. I wonder how it works with a rolling ship. You cannot fall out as the slides are tubes but it must be a completely different sensation than being ashore in a fun park.

On board we created our own fun today as we held the mass casualty drill. I always offer the option to organize one as it takes so much time for the ship to do it and the Westerdam put it at once on the safety schedule. And thus the race was on to evacuate and save 35 casualties from a collision and the resulting fire. The 35 were all volunteers from among the crew and they put on a very nice performance. Everybody likes to be a drama queen once in a while. The main challenge of such a drill is always the coordination of the transport. We have man power, we have equipment, and we have the leadership but those three things need to be coordinated to get the casualties to the right location. 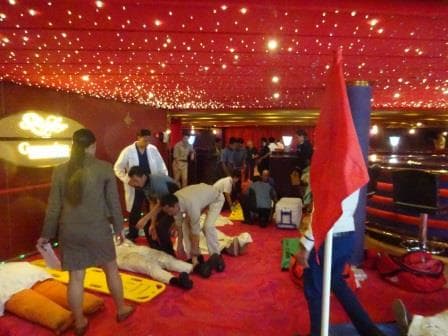 The Red triage area. (Normally called the Queens lounge and which just happens to be red) Medical is overseeing the stretcher teams bringing in the wounded.

For that purpose various public rooms are assigned; Red room for survival possible, Black room for beyond hope, Green room for walking wounded, Yellow room for those who should be seen after the Red room cases. The medical team (and we only have 5) can then rotate from room to room and sort them all out. Sometimes we have (still practicing) medical professionals among the guests on board and then the Captain can decide to make an announcement to enlist their help.  But for drill purposes, our focus is on the organization of making 2 + 2 = 6.  Or better said: help to increase the output of those 5 ships medics.  All that kept us happily occupied up to just before lunch time.  In a few days we will have a debriefing and in the mean time I will spend some time collating all the observations to create a debriefing to learn and improve. Luckily I had my 5 “spies” available and they were everywhere to photograph, make little movies and observe. Next time they will be on the other side of the fence. 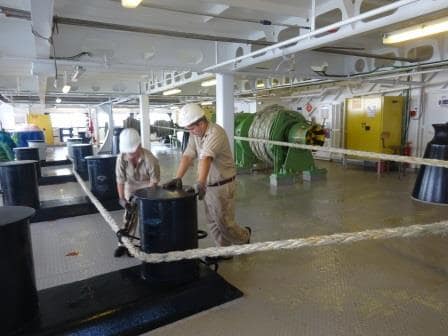 Our Lady 3rd officer applying a “stopper rope” to the mooring rope. Once there is slack in the rope the other officer will wrap it around the bollard.

At 13.00 hrs. class continued for them and we are focusing on items they do not learn much about at school. They learn about mooring ropes and winches and docking etc. but they do not learn about keeping oversight and having a good situational awareness of what goes on when four winches are going at the same time and 8 sailors are jumping around with the ropes.  So we watch and observe at departure and I ask nasty questions. A little practical item which I teach them is how to put a rope on a ships bollard and not to keep it on the capstan.  With our mooring deck configuration it is sometimes not so easy to do and the sailors are very quick in saying “no can do chiep”.  What can you do then if you are just starting out as a brand new third officer?  Only one thing, do it yourself. Show it and then there is no argument from anybody.

The weather turned out very nice today and approx. 5000 guests, coming from the two ships, enjoyed the resort and the greater island. When the ship docks on the North side of the pier, its bow is almost onto the beach and it gives the navigators a very close up look of what goes on below. Sometimes we complain as captains that the navigators look too much in the radar and not enough through the windows to the outside; today this was absolutely not the case. A “good lookout” was kept at all times.

By 15.00 hrs. the ship had sailed again heading full speed for our next port of call San Juan. Here we will make our approach at 10.30 am to be docked by noon time; for a long stay until 23.00 hrs.  The weather looks like regular Puerto Rican weather. Partly Cloudy with a chance of showers and temperatures of 89oF or 25oC.  I hope it will work out as I want to go down with a lifeboat to train practical boat handling.