In the early morning we sailed through the southern tip of a left over wave field which caused the ship to move about somewhat, but by 10 am we saw the waves go down and the ship settle down as well. Now we are back to the regular “motion of the ocean” which is always here even when it is or has been perfect weather for a few days.

As we are now sailing above the Bahama’s and calling at ports in the area I wondered just how long Holland America has been visiting this area. Grand Turk where we are tomorrow has only been on the cruise map since we have a dock there. Before we had a few attempts to go at anchor and tender but the percentages of cancelling were very high and we all gave up until the Pier was constructed. Half Moon Cay has now been with us since before 2000 and also before that time we did not go there as we ourselves had to build the location first.

Closer to Florida we have Freeport and this port has been on the map for a longer period. As a cruise ship destination it gained real prominence as an alternative for Nassau.  In the good old days when the ships were small and it was not a real mass market yet, the docks in Nassau could handle most of the time 10 ships. In the mid eighties this started to change and slowly the ships got longer and the Pier that before could handle two ships, could now only accommodate one ship. Much of this was caused by Carnival when they introduced the Ecstasy Class.  With the arrival of this class the company greatly expanded and filled double berths. At the same time for the large number of 3 and 4 day cruises Nassau was not enough anymore and the eye was cast to the other side of North West Providence Channel where there were docks as well at Freeport.

It started out with a very ramshackle dock just inside the entrance and I remember going there with the Westerdam (II) and thinking: “if the wind picks up and blows against the ship, the ropes will pull all the bollards out of the dock, it was sometimes very marginal”. The 2nd thing I remember were the very loud and obnoxious cab drivers who tried to pressure the guests into their taxi’s as it was the only way to go to town. It gave ship’s management the headache of choosing to either advise the guests to stay on board and then get the complaint “why are you going there”, or advising them to go ashore and then get the complaint “why don’t you do something about these guys”. But things have improved greatly. There are now nice docks and transport has been sorted out and the Cab drivers now provide a professional experience. Freeport turned from a back water port for laid up ships (Our Rotterdam V was laid up there from 2001 to 2011) to a prominent port with a large container terminal and the Bahama dry dock company where nearly all the cruise ships go that are dry-docking  during the winter period when sailing in the Caribbean. 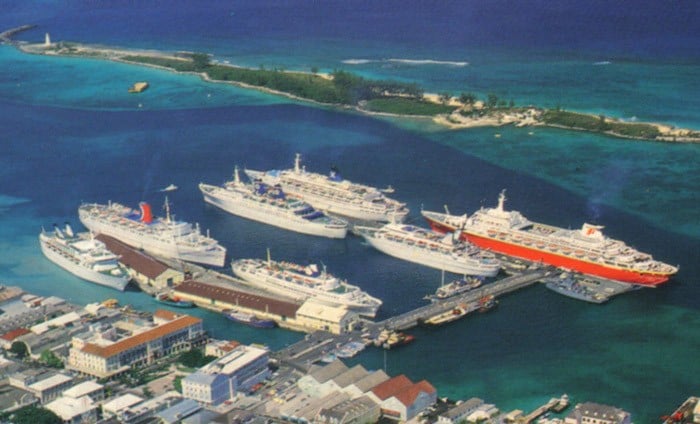 More ships in port but with a lot less guests coming off.

That leaves Nassau and this port has always been an important cruise port. Already before 1900 there is a mention of ships calling there during “excursions” as cruises where called in those days.   Holland America came a lot later as our first cruises went to the Holy Land and only with the down turn of the US economy which really impacted North Atlantic travel after 1929, the company sent its ships on more cruises.   It was the Veendam (II) that called in 1929 during voyage 50 at Nassau as part of an Around the Caribbean cruise from New York. The Captain was Reinier Braun and the cruise lasted exactly a month.  As the guests seemed to have liked the port there was a steady increase in visits and by 1936 Statendam (II), Veendam (II) and Volendam (I) had the port on their schedule. After World War II, the pattern continued until in the 1970’s and 1980’s with Nassau a standard port for the company. Then the big boys arrived and we slowly moved out. Now we still call there but with less frequency. However recently for the Zuiderdam it was the last port of its trans-atlantic crossing. 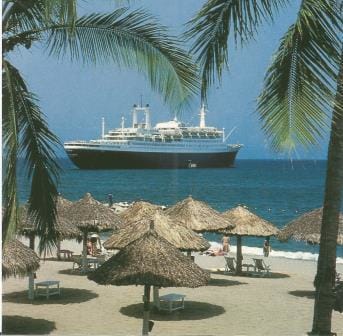 A well known photo but an unusual scene. The ss Rotterdam (V) normally docked at Nassau but here she is at anchor. It must have been a really busy day.

On these Westerdam cruises we sail by far to the North on our way to Grand Turk Island and that is where we will arrive tomorrow morning. The weather should be good but with some thunder storms in the area. If they stay away from the island area then we will have a partly cloudy day with a gentle breeze and temperatures around 80oF or 27oC.  We will be in with a Carnival ship again and the exciting part of the call is (at least for the navigators) we are docking at the North side of the Pier instead of the South Side.