As was to be expected, disembarkation took a lot longer than normal with such a full house. Nothing the ship could do much about as it all depends on the speed of the immigration process in the terminal. On a holiday weekend like this the CBP is very hard pressed. Their own people want a weekend off and the cruise lines are asking for more help as their ships are fuller than normal. Both sides try their best but something has to give and that is the dis-embarkation flow. Normally I am the last one off the ship, to show my face and to help with the zero count and most of the time I am through around 09.30 or 09.45 hrs. This time it was 11 am before the last group was called off the ship shortly after followed by me, happily waving my custom declaration with nothing on it. But protocol demands that I have one and thus I do fill one out.  This time I was not the last one, they found 19 people still hiding on the ship and they had to be flushed out by the ship’s crew.

So by 11.12 am it was “zero count” and me back on board by 11.25 am when embarkation started again for the next cruise. A late disembarkation finish does not unduly affect the ships operation very much as long as the guests are willing to leave the cabins timely. Holland America allows guests to wait in their state rooms (we are one of the very few companies which have that perk) and mostly the cabin stewards can work around it. It is very unusual for a whole cabin section to have the same disembarkation time and as everybody leaves in staggered groups, the cabin stewards can follow that pattern with cleaning. Then there is the strange phenomenon of impatient people leaving the cabin anyway. The closer it comes to their time of scheduled disembarkation or the time beyond that point, the more guests are moving out. It almost seems that there is a sort of subconscious desire to “push” the process along by first moving to a public room and then closer to the gangway. I suppose a psychiatrist would have some sort of explanation about this. The cabin stewards don’t but they still make use of it. 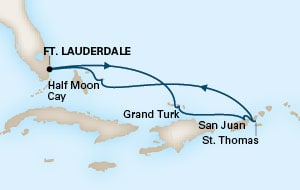 The Westerdam is sailing on the same schedule again for the coming cruise and she will keep doing so until January when there is a Music Charter cruise in between and for that cruise the ship will also call at Key West.  But we will have a repeat of our last cruise again. It suits me as I can plan in advance and also repeat something if it went wrong the cruise before.

For the ship it was a reasonably quiet call. Also the sub-contractors and other Very Important People, who otherwise Have to be on Board are nowhere to be seen because of Thanksgiving weekend. It will be busy again next week.

My class is moving into the 2nd week and more and more own work is being assigned. This week they will have to start to give presentations about Safe Working methods on board, they will have to review arrivals and departures to identify the most critical points where it can go wrong———- and what to do when this happens and they have to start taking over work from the sailors on arrival and departure. The latter is done to ensure that the necessary skills are present so they can correct the sailors when the time as a supervising officer comes.

This morning they followed the Safety Environmental and Health officer to learn about waste streams and recyclables going ashore………… and the pile of paperwork that goes with it and then this afternoon it was half of the group on the bridge and half of them on the aft mooring deck.  Tomorrow we will have a theoretical day again.

The weather is improving; most of the nasty bumps from the day from before yesterday are gone and the swells have subsided to less than 10 feet. We will still feel a few bumps as with the disappearing wind, the old swell is having longer waves and the Westerdam will have to go against it. Luckily we are doing only 15 knots and this should make it not so bad. The winds are returning to strong Trade Winds and all will be well again in the world.