We had a very stormy night with winds blowing up to 75 knots. Luckily they were half on the sb. beam and thus it affected the ship less than it could have. If we had had it on the bow then we would have been really moving. Still the ship was quite lively until in the early morning when it came under the lee from Long Island and later Cat Island. Then it was quiet until arrival.

The positive part of this storm was that it blew the rain away and we had a sunny day with only some rain clouds in the distance. When we arrived at the island it was still breezy but it was in the parameters of the ships capabilities and thus the captain could decide that it was safe to make the call. Unfortunately this could not be said for the local tender that is being used to get the Bahamians who operate all the facilities (except food and drink) from Eleuthera to Half Moon Cay so none of the Shorex Excursions could operate during our call. Except the horse riding as the grooms live on the island with the horses.

But the sun shone and the ship emptied out for the beach. When I went for lunch at noon time, there was hardly anybody less than 75 years left in the Lido. They had either been there & seen it or thought it was too wobbly a tender ride to go ashore. 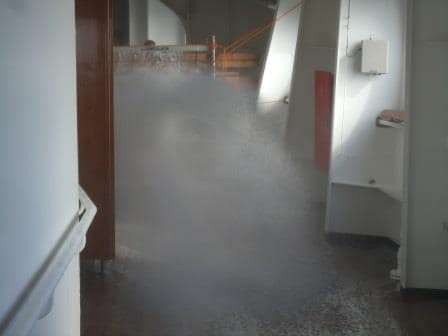 A nice bit of water pouring through. We built the wall on the outside deck for the water to disperse easily.

In the meantime I got the people in the Emergency Functions excited. In my blog from a few days ago I announced that we would have a Damage Control Drill. That was supposed to have taken place yesterday but due to a scheduling conflict it was moved to today. The purpose of an actual Damage Control drill is to repair a hole in the ship’s hull and stop or reduce the ingress of water. As we cannot make a real hole in the hull it is not easy to do something that resembles reality and have the crew learn something from it. Thus enter Yours Truly with his box of tricks into the equation. 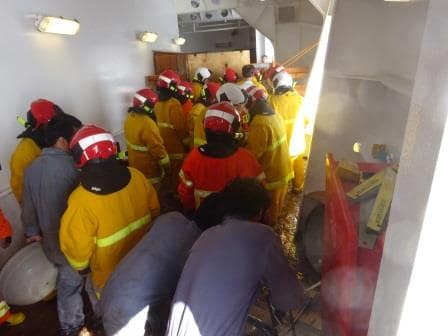 The Attack on the holes. The teams protect themselves with a sheet of plywood to be able to work at the holes.

So a few days ago I built a vertical wooden wall with a cadet and two sailors. This morning we rolled it into position, secured it and put four fire hoses with 9 bars of pressure on it. (That is 130 psi of water power) It simulates very well water pouring into the ship.  And then the challenge was to plug the holes. For this purpose we engaged all the emergency teams.  The engine teams take the lead here as they are the experts with pipes, water and steel and the rest gives support. As it is important to bring as much material to the location as possible, the more manpower we have the better it is. 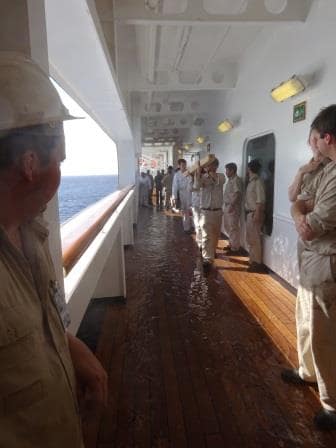 Support teams coming in with equipment and wooden beams.

There were four large holes and if not plugged they would have brought about 1500 tons of sea water into the ship each hour. Our pumps can only manage 150 tons an hour (That is still 3 swimming pools full) and thus the primary task is to reduce the ingress of water to such an extent that the pumps can handle the flow. After that we then have time to find a more permanent solution.  It took the teams exactly 23 minutes to reduce the flow to nearly zero and that is a pretty good result. The engineers were quite excited as well because it is not every day that you get the chance to really practice something that could really happen.

Once we were done all the equipment had to be hosed down with fresh water as sea water is very aggressive and then stored away again. My Dream Team of trainee’s were then tasked to take the wall apart and return the hoses to their Fire Hose Lockers as safety equipment has to be ready at all times. It is always nice to spend a morning messing around with water, especially as it is for a good cause. 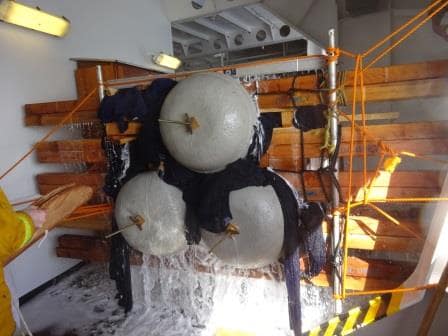 The solution. Three main plugs with wedges and towels. The water still leaking through can easily be handled by the pumps.

By 1500 we had all the guests back from the island and after turning the ship around we could set sail for our final port of call. This is the last day of the cruise and tomorrow we are back in our home port Fort Lauderdale.

The weather does not look too exciting. It will be one of those partly cloudy days, where it is only partly cloudy if there are no showers.  And it will be breezy with winds going up to 25 knots or more but there might just be a dip when the ship arrives. Still it will be warm enough with temperatures around 79oF / 26oC.  I hope that the guests had a nice thanks giving cruise, even if the last 24 hours were a bit boisterous. But the ship made Half Moon Cay and that should account for something.