It was any early morning arrival and we had to wait a little bit as apart from the Zenith we also had the Celebrity Silhouette in port and that brought the total of cruise ships up to 4 and the total of ships up to five as there was also a small cargo ship present. But we were still docked by 07.00 hrs. exactly on the schedule as envisaged by those who made the cruise brochures.  As all the guests on the various ships were looking at a near perfect cruise day, there was a steady flow coming from all the gangways and moving into coaches or walking into town. It was a sunny day but it was not too warm and it was not too windy, it was near perfect. (It would have been perfect if I had had time to go ashore as well, but we had a General Emergency Drill today). 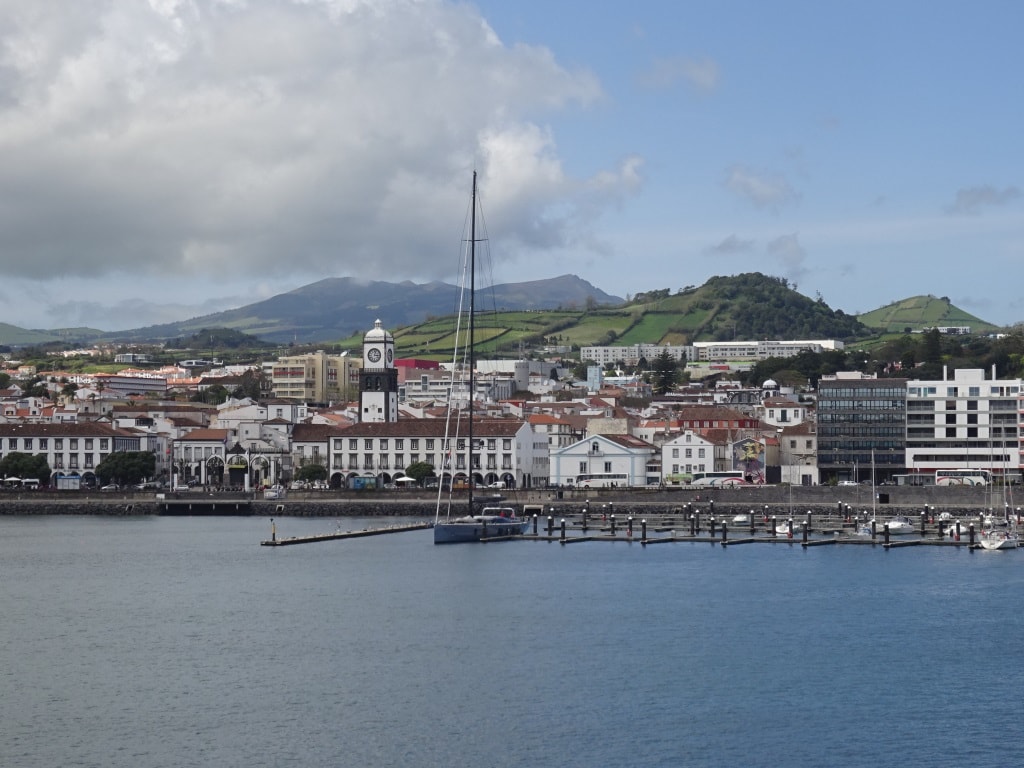 Ponta Delgada as seen from the ship. Wonderful place to be; friendly people and you can pay in euro’s.

Today the weather was running ahead of its own schedule and the increased wind that was supposed to come through in the afternoon, came through in the morning and died down again by early afternoon. At the same time it veered to the North East from the South West and with the North Easterly wind came very low clouds which collided with the island at the east side and brought rain there. Not that it bothered us we just saw it after departure when our route turned into scenic cruising with a green and lush island on the port side and whales and dolphins on the starboard side. No wonder that the Azores are so popular with the cruise guests.

The Azores have been a popular place for cruise ships for a long time. And the constant battle has always been between Funchal on Madeira and Ponta Delgada on Sao Miguel; about who was the most wanted and enticing island for cruise guests. Both islands are part of Portugal so it is not about international rivalry.  That could be the case between the Portuguese Islands together and the Spanish Islands such as Canaries which are not that far way. Before cruising became really popular, there was already a steady trickle of ocean liners and passenger ships which filled their winter downtime with an excursion to the warm weather islands. In most ports a breakwater/ dock had been built shortly after the turn of the century as running tenders in these ports was nearly impossible even during perfect weather due to the long ocean swell rolling in. Even today, with very good weather conditions, we could still see the waves crashing ashore just outside the port. 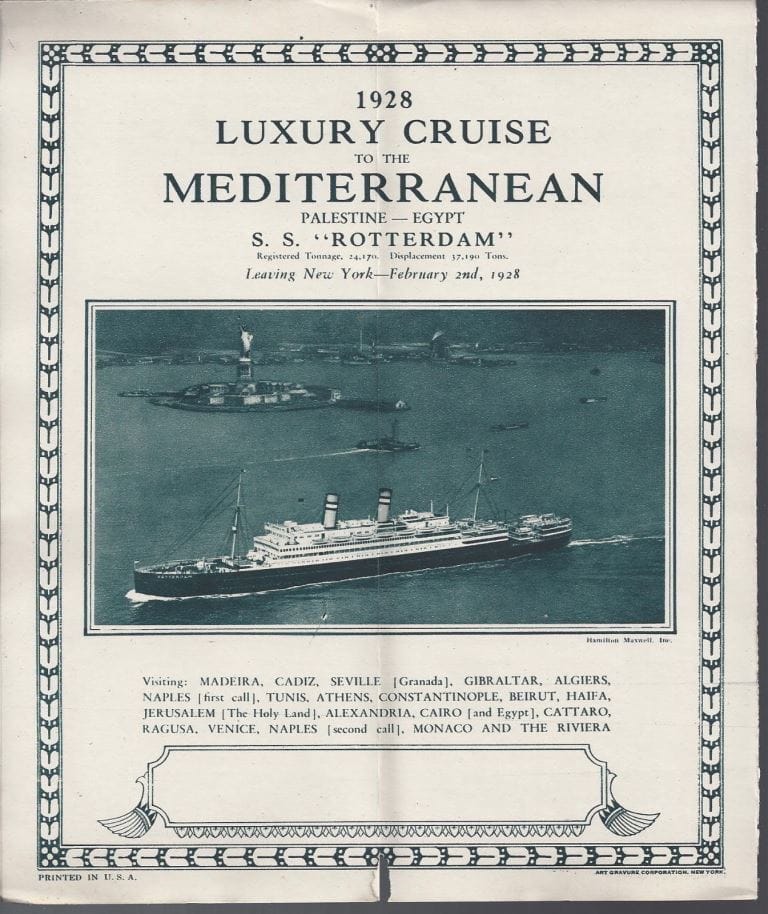 A cruise of the ss Rotterdam in 1928 calling at Madeira (Funchal) as its first port after leaving New York.

The Germans and the English were the most eager to visit these ports, no doubt due to the fact that they could reach a bit of sunshine without having to sail too far and with a climate which was /is very temperate due to the regulating North Atlantic sea temperature (Never too warm and never too cold). So you could make these cruises with ships that were not really designed for cruising and definitely did not have any air conditioning. Holland America showed up on occasion; when one their ships made the annual spring cruise to the Holy Land before the First World War when they then called at Funchal. Not because of the difference in port quality, as both ports are nearly identical, but Funchal had better coaling arrangements and that was for the old coal fired ships of extreme importance. The Holland America Line cargo ships called for coaling mostly at Las Palmas on Gran Canaria and although I do not know the real reason for it, it looks like that it had to do with reaching their limit of coal supplies on board and then to be able to load as much as possible for the remainder of the journey.

After the 2nd world war, when cruising picked up again, and the ships were now oil fired, they called at the ports depending on how the cruise was setup. Same as we still do today. Next time when the ms Rotterdam is on its crossing, it might as well call at Funchal or Las Palmas instead of Ponta Delgada.

We will now have two days at sea to cover the distance between Ponta Delgada and Brest in France. Weather still looks good we just have to see what the air circulation off the African coast is going to do.  For the moment it is perfect. The high pressure system we were sailing though yesterday is on the move north and exactly following our course line. So we will keep nice weather and it might also keep a nasty swell away from us. Otherwise it will get a bit wobbly on Wednesday.