The weather worked out as predicted and this morning we woke up to a windless surrounding, courtesy of sitting in between all the various wind directions generated by the High pressure system which we are sailing through at the moment. That also had an effect on the sea and swell. This time the word confused seas was completely appropriate. As the winds around is all from different directions (see the wind chart of yesterday), those winds also generated waves and swells for all different directions. When looking outside around noon time, I recognized a long running semi high swell (6 feet) from the North West, a long running lower swell (4 feet), from the South West and a bit of wind from the North East which did its best to flatten off the tops of the waves even more. Sometimes these swells enhanced each other and we saw 10 feet and sometimes they cancelled each other out and the sea was flat between two subsequent waves. It will remain confused until we come very close to the Azores  when we near the North East side of the current High pressure system and then the winds will become Westerly. But not much more than a very gentle breeze and we might not notice anything at all in port as we will be docking deep in the port of Punta Delgada which is protected against westerly winds by a mountain ridge. 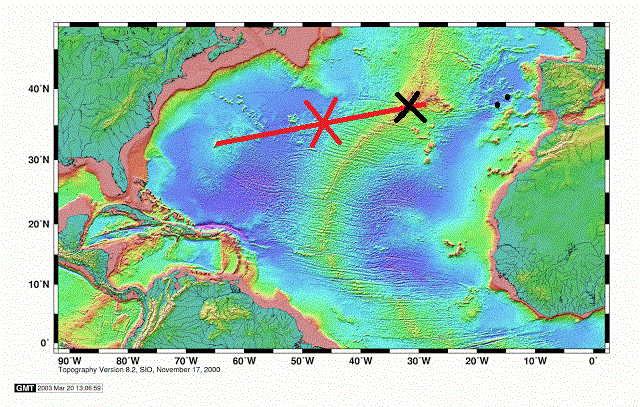 We are now at the black cross. The water is a lot more shallow as we are nearing the Azores plateau.

For our under water happenings we are now sailing right on top of the midatlantic ridge. And as there are three plates meeting here there are numerous cracks as part of and next to the main Atlantic ridge. That created and is still creating the plateau on which the Azores are located. Off the plateau the ridge is about 10000 feet below water; at Pico (one of the islands of the Azores) it has created a mountain peak = Pico, which goes 7700 feet up into the air. 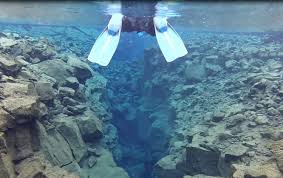 The mid atlantic ridge off the Azores. 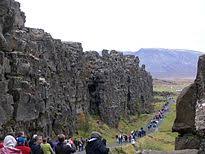 The Ridge Walk as is possible in Iceland. Every year the path is supposed to get 2.5 cm. wider.

The Azores, the northern islands. The underwater mountains, hills, valleys and ravines under water show a very fractured landscape.

We stayed about a 100 miles away from the island of Pico and thus we could not see it. Our straight course line only converges with the Azores by the time we put on the brakes at the pilot station. That is now all arranged. The Royal Princes will be 30 minutes behind us and we are aiming for a 05.30 pilot station. Ahead of us is the Zenith which should be there earlier but we have been advised that we might have to wait a little bit. Still she should not be much of a challenge as she is going to the downtown berth (courtesy of making regular calls against our one off) and both us and the Royal Princess are docking at the inside of the Breakwater. We will swing around on arrival and then back all the way in to the end of the break water. Which is nice as it reduces the walking distance to downtown considerably. The Royal Princess will then come in after us and will use the remainder of the pier.

Weather for tomorrow: Temperatures, 17oC / 72oF sunny and a very gentle breeze from the west.  Should be a perfect day for the guests going ashore and to go sightseeing. Although Punta Delgada is also a perfect port to do nothing and just sit on the boulevard to watch the world go by.