The ship awoke today to a beautiful sunrise at 07.00 hrs. Right in front of the ship and in the round sun we could see a single black spot and that was the Regal Princess. She was still some miles ahead of us but we expect her to stop an engine sometime this morning to adjust for her correct ETA. And then we will overtake her as the plan is still to dock first.   The wind has reduced somewhat and instead of a relative wind wind force 8, we now have a relative wind, wind force 5 on the starboard side.  Life is never perfect of course, as we are now moving away from the Gulf Stream we have a different balance between the seawater and the air temperature. Both are now almost 19oC. or 66oF and just far enough apart that the moisture in the air can condensate somewhat. As a result it became quite hazy later in the day and the haze blocked out a strong sun from shining onto the deck. But the swell has mostly disappeared and the ms Rotterdam is steady as a rock again. 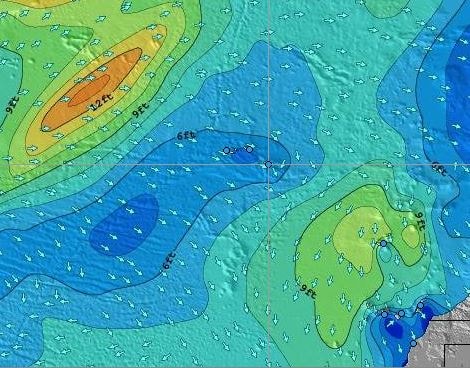 These are weather maps we like. All the nasty red stuff is disappearing. (Courtesy www.stormsurf.com)

Early tomorrow morning we should arrive in the area which is dominated by the Mid-Atlantic Ridge; although we will not see very much of it. At the moment we have almost 11000 feet under keel, just less than 4 kilometers, and that also reduces the chance of running aground considerably. As the new land ridge is formed constantly it would need an awful big disruption to build up enough lava to create a pinnacle that would go up 10,000 ft. Where is this lava coming from? From cracks in the earth’s crust. Everywhere were there are volcano’s, the earth’s crust is either very thin or there is a wide crack which lets the lava escape.  In the old days people took one or more volcanos just for granted without really knowing why they were there. That all changed when a gentleman called Mr. Wegener popped up. He is now mainly remembered for his theories about these cracks and related earth’s movement although his main focus through life was meteorology and geophysics. Focusing on Greenland where he also died 50 years old while on a very cold expedition. 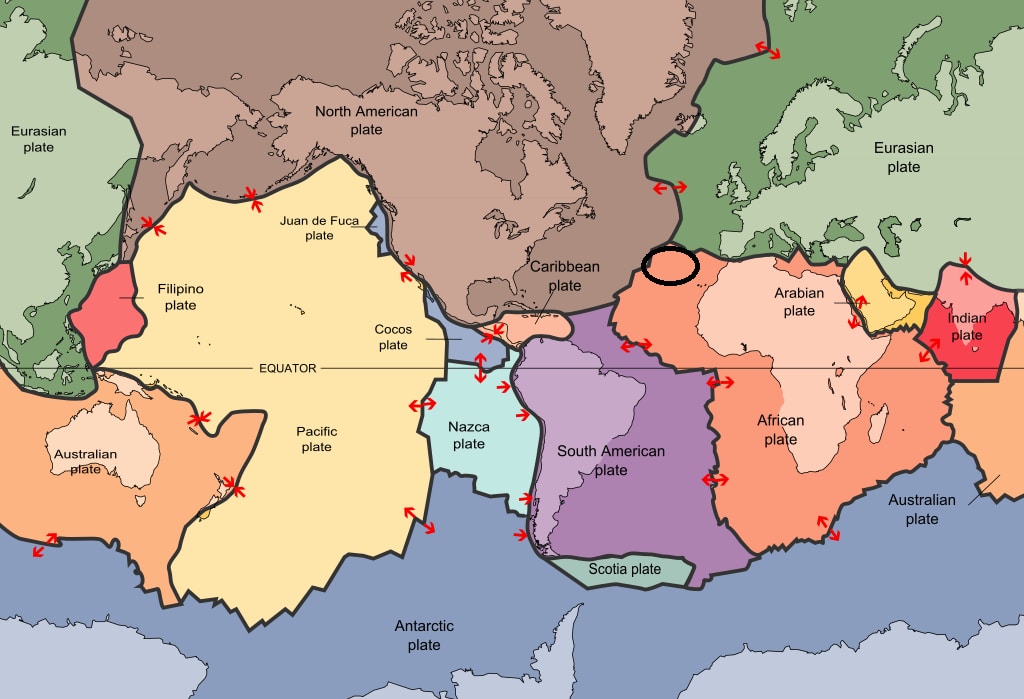 The way the world looks like if we would only look at the natural – volcanic- boundaries. We and the Azores are in the black circle. (Diagram courtesy: Wikipedia)

In simple terms he figured out that there was a correlation between all these volcano’s and the way they were patterned around the world. He tried his whole life to get his theory accepted but as is not un-usual, when something truly revolutionary is proposed, not many people and scientists believed him. It took well into the 1950’s before others had accumulated enough much evidence for him to be recognized as the father of the Tectonic Plate Theory (and reality)

What is it; basically the whole outer crust of the earth is made up of several plates and they move. (About 2.5 cm a year) They do move because they are pushed by the lava coming out of the depths of the earth and this is helped by one plate moving over the other and the other one then being pushed down into the earth again. Becoming fluid and then starting the cycle again somewhere else, depending on the magna flow deep in the earth.

The mid Atlantic ridge is the location where the North American Plate surfaces and is going westwards and the Eurasian plate which is going eastwards. Where we are now, near the Azores, the situation is even more complicated as it is the region where those two plates are also meeting the African Plate. This is called a Triple Junction. Hence there is good reason to expect volcanic outbursts on the Azores and on any other islands in the area. (Madeira or the Cape Verdes) The Volcanos on the Azoric Islands have been exploding on a regular basis through the centuries and if there is no sign of a volcanic eruption then there is always the danger of earth quakes. The plates which are sliding with 2.5 cm. a year do not experience this in a friction less way. It is more a “hop” and a “stop”. The hop is then the earthquake when the earth really moves. The last major Volcano outburst in the Azores was in 1958 but (light) earthquakes happen with great frequency every year. Most earthquakes happen under water and that means we do not realize it and feel it while on the ship. Those earthquakes can create a Tsunami but even when a ship would be sitting on top of it, you would not feel it as a Tsunami is a pressure wave which only “bundles” its energy when it comes in shallow water and it has nowhere to go but up. There is no Tsunami or Earthquake alert out for the moment so I assume we will be ok for our coming visit. No reason to be alarmed, the people in San Francisco have also not run away since 1906.

Weather for tomorrow: We are now sailing into the Centre of the High Pressure system, so the wind should shift from the South, to the North and then fall away. If the system does not move there should be a period of hardly any wind and only confused seas to observe. Temperatures should remain the same. They are too close it might remain hazy but if the sea water temperature fluctuates a little bit we could have a nice, clear and sunny day. 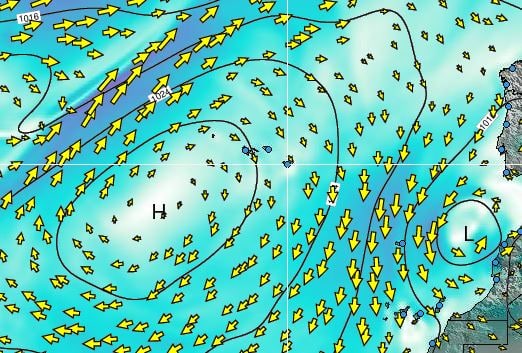 The way the wind looks like around us. We are almost in the H of the weather system and thus we should see the wind changing. (Courtesy: www.stormsurf.com)