Well, we did not go faster than the weather and we did not go slower than the weather. And thus we woke up to a rainy morning. But there was change in the air with the following wind slowly moving at bit to the South resulting in strong winds on the starboard side of the ship (a relative wind force 8: 20 knots from the ship and 12 knots from Mother Nature). We have some avid walkers on board who are either doing 1,2,3 or umpteen miles a day and each time they came around the stern they got the full southerly wind in the face until they had made the corner. Not pleasant you would think but as one Lady said, leaning against the wind also burn calories. I suppose that is true, I just do not have any idea how many calories that might be. 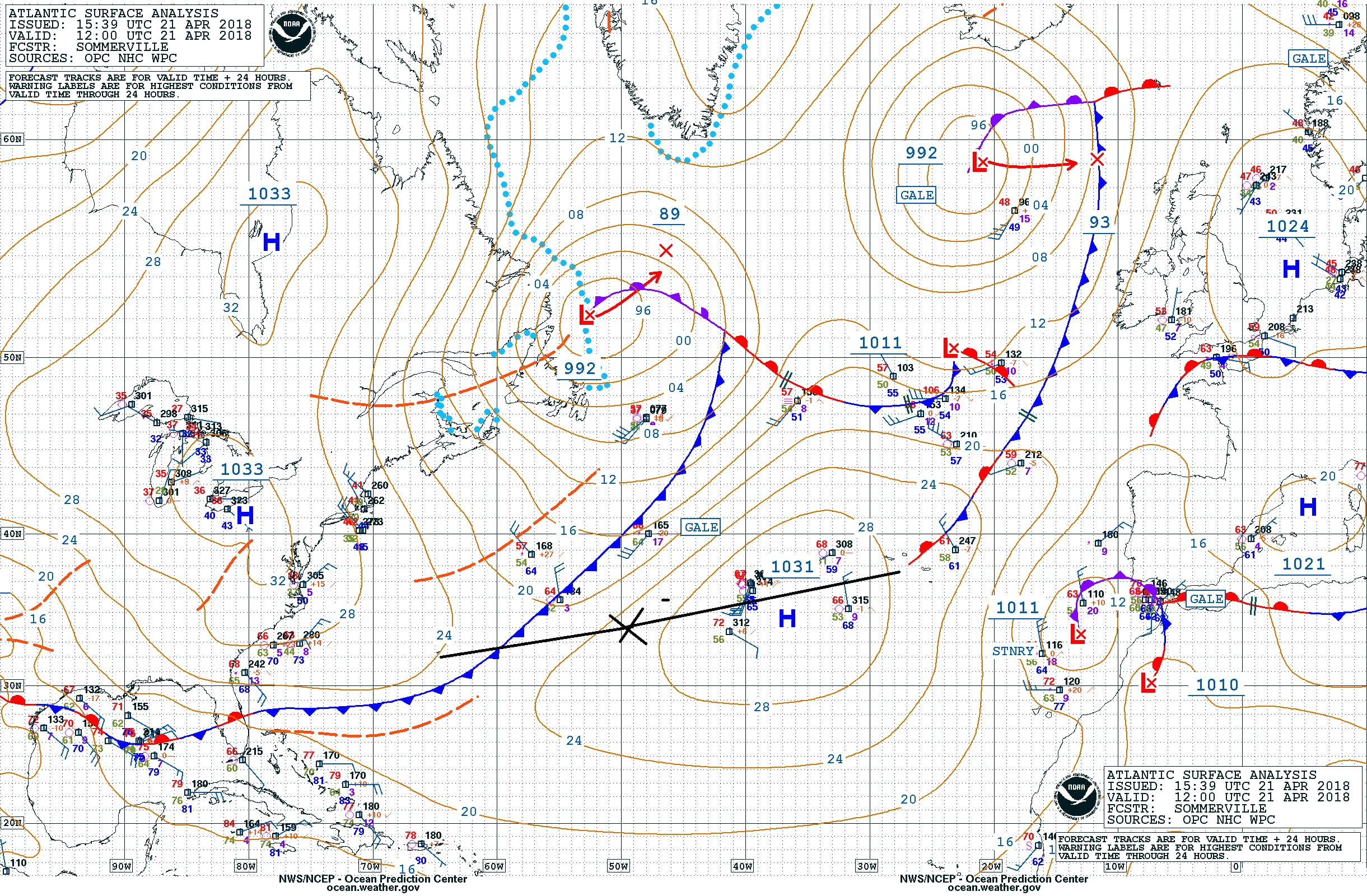 The weather chart for today. We were at the X at 1600 hrs. ships team and the frontal system is being pushed north by the High pressure system. That should mean that it will remain sunny and that the wind will diminish in the near future. (Courtesy NOAA)

I mentioned yesterday that there would be at least 3 cruise ships in port and that the Regal Princess was going to arrive shortly after us. Although it being Saturday, the local authorities had been thinking and have asked the captain to arrive at least 15 minutes earlier to spread the congestion a little bit. Of course he was willing to do that but it meant bringing an extra engine on line, while the following wind had just made it possible to switch one off as we were making good speed. Now we have to catch up 15 minutes first and then we can stop the engine again. A sort of driving faster to get there before the traffic jam. I try to do that on the motorway as well, you know that a certain junction will clog up at a certain time, so you try to make sure you are past that point before it happens. Whether it was speeding up of the ship or not but shortly after the sun came out and the rain clouds faded away.

The wave and swell chart of today. I have cropped out only the significant part for us as these charts cover most of the North and South Atlantic. As you can see we are just skirting the 12 feet wave edge and are in the 6 to 8 feet. Depending on how fast this wave field moves, we will get less swell or it will remain the same. (Courtesy: www.stormsurf.com)

To the north of us is a nasty weather system and some of its swell rippled down to the south and we picked up a bit of it increasing the average height from 6 to 8 feet. It merged on our course line with the swell generated by the Southerly wind and that gave on occasion a confused sea and a strange wobble of the ship. But we are still doing extremely well with the weather as the ship only moves on occasion. If the swell goes over 10 feet then we could get some regular rolling or pitching but that has not happened yet. It is always hard to predict what will happen in the Mid Atlantic but for the coming days we might be able to keep the swells low and the ships movement very small.

As far as Wild Life is concerned it is very quiet. The wind and the rain do not help I suppose but all day I have not seen any birds or other animals what so ever. While normally this is a good area for “catching” exhausted small birds that land on the ship and who then happily hitch hike with us to the next port. Thus at the moment below water things are more interesting than above. Yesterday morning we left the Bermuda shelf behind and the water went very deep. Contrary to popular belief the ocean bottom is not flat even if certain areas look flat on the chart. It is just relative; if you have depths of 6000 meters or 18000 feet, then a height variation of 500 feet is not much. Still 500 feet is a nice size hill on dry land. If we could drain away the water around Bermuda then Bermuda would be a very big mountain with very steep curved sides ending in a sort of pancake top with a few hills sticking out and those hills being the dry land of Bermuda. Once we fell of that shelf, that pancake, the water went deep, very deep. 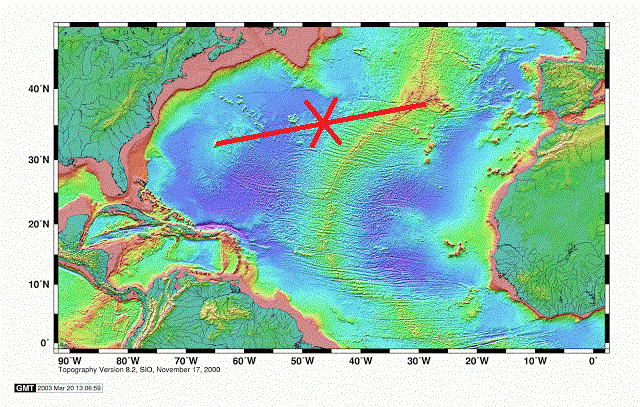 We will keep sailing over very deep water until we come to the Azores. Before that we will cross the Mid Atlantic Ridge, there were the European side meets the American side with a huge crack in the middle. More about that tomorrow. The Azores are located on a sort of side platform which is attached to the Mid Atlantic Ridge. All caused by extensive volcanic activity. The Azores itself are quiet at the moment but all along the Mid Atlantic Ridge here is a lot of volcanic activity deep under water.  The minerals and other nutrients which are released here form the environment for lots of wild life and many new species are discovered. Which is now possible because unmanned submarines give the scientists finally the option to explore the great depths without having to be there in person. They say we know more about Mars than we know about our own ocean and I would not be amazed if that was correct. By the way for those guests who are interested in Mars and other planets one of the lecturers on board is explaining mankind’s exploration which goes up instead of down.

Tomorrow is another day at sea, and then one more and then we are in the Azores. Weather for tomorrow: again it is a wait and see game. How fast is the outside weather going? If we keep up then the gale to the north of us will not cause too much of an issue. If we go slower, we might feel more of the waves that it is sending down to the south, towards us.